Herblock was not fond of Ronald Reagan.

In fact, the three-time Pulitzer prize-winning political cartoonist judged the "great communicator" rather harshly. In a 1984 portrayal, the 40th President of the United States is transformed into a television pitchman selling America an alternate reality—through the looking glass.

It was a rare president that escaped the wrath of Herblock’s pen and pad—weapons that the cartoonist said kicked the "big boys who kick the underdogs."

On Tuesday, historian Sidney Hart of the National Portrait Gallery led a sneak peak preview of the Herblock exhibit entitled "Puncturing Pomposity," which opens on May 2. The 40 cartoons span Herbert Lawrence Block’ s seven-decade career, which included 55 years at The Washington Post. He continued his artful commentary right up until shortly before his death in 2001 at age 91.

Hart said that both Nixon and Eisenhower, enraged by Herblock’s cartoons, canceled their subscriptions to the Post. Nixon claimed he didn’t want his daughters to be upset by the frequent skewering he endured and was even rumored to have started shaving twice daily because of the dark 5 o’clock shadow the cartoonist always gave him.

And while Herblock’s work usually had a liberal bent, the Democrats were granted no immunity. At the height of the Monica Lewinsky scandal, a 1998 rendering shows William Jefferson Clinton, his head held high as he wades ankle deep in the thick mud. 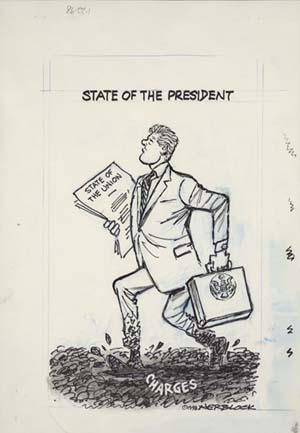 It’s a treat to get an up close look at the original cartoons, which were culled from the archives of the 14,000 pieces the Herb Block Foundation donated to the Library of Congress. The thick black lines of his ink pen on the large drawings stand out sharply. It's fascinating to examine the places where Herblock pasted a scrap of paper over a phrase, and rewrote a caption.

While the span of Herblock’s cartoons dates from New Deal to Great Society to Watergate, Hart said an election year was a good time for an exhibition to focus on the principles of poking fun at the presidency. A cautionary tale, so to speak,  for the three hopeful candidates. What does the next generation of pen and ink critics have in store for them?

The exhibition makes also for irreverent contrast, housed in the hall adjacent to the museum's stately collection of presidential portraits. Or as Martin Sullivan, the portrait gallery’s new director, puts it with understated elegance: Herblock lets us "explore the presidency in other dimensions."