Holding it at arm’s length above his head, Francis Rogallo’s finger tips carefully gripped each wing of a silver, diamond-shaped glider. It was late spring in 1959, and the NASA aeronautical engineer was about to launch a small model of his parachute-like glider, just as he had done a thousand times before—limp wings held apart, a small payload suspended by a few lines in front of his head. The tinfoil texture of the newly developed mylar crackled slightly as the model took flight.

Gravity soon balanced the payload against the glider, the wing took shape, and the model flew slowly across the conference room at NASA’s Langley Research Center in Hampton, Virginia. Its flight was curtailed only by the room’s white plaster wall, where with a crinkly thud, it hit a few feet from the ceiling and crumpled into a shapeless pile of mylar and string on the floor.

Rogallo had demonstrated the gliding potential of his flexible wing before, but on this day his audience included the most recognizable and influential person in the rapidly evolving space race: the world-renowned rocket engineer Wernher von Braun. Von Braun immediately grasped the potential of using a flexible wing to recover rocket booster engines, and invited Rogallo to Huntsville, Alabama, to show his team. The moment proved auspicious, because for a brief period, the Rogallo wing, an innovative technology that might have rewritten the history of spaceflight re-entry and recovery, became the subject of much scientific inquiry and optimism—a kind of darling of the burgeoning space race.

One application for Rogallo’s wing, the “paraglider,” developed under a NASA contract by North American Aviation between 1960 and 1963, would make it the chosen landing vehicle for the Gemini and Apollo programs, promising astronauts the autonomy of piloted landing on terra firma after returning from space.

The Gemini paraglider looks almost quaint to the contemporary eye, a futuristic brainchild of 1960s-era engineering. Visitors to the Smithsonian’s National Air and Space Museum’s Udvar-Hazy Center in Chantilly, Virginia, will find the antiquated relic suspended from the ceiling in the “Human Spaceflight” exhibition. The giant kite-like wing of the Smithsonian’s Gemini paraglider dwarfs a wheeled capsule, with oversize, almost cartoonish inflated leading edges and keel for increased gliding efficiency. Five cables attached the wing to the capsule and allowed astronauts to control the flight path. “The paraglider was an interesting solution to the problem of capsule recovery,” says Smithsonian senior curator Michael Neufeld, “but it proved to be technically more complex than engineers realized at first.”

What is almost lost to history is the simple fact that this fanciful wing actually flew, making it possible for returning spacecraft to land on runways. By December 1964, the paraglider was flawlessly flying through its entire flight sequence to successful touchdowns on land. History reminds us, however, that all the Gemini and Apollo flights were recovered by parachutes, with the capsules landing in the ocean and retrieved by Navy ships. So what happened to Rogallo’s paraglider?

Originally conceived in the mid-1940s as a way to make aviation simpler, more practical and economically available to everyone, the paraglider took its name from a combination of the words parachute and glider. “Wouldn’t it be great,” Rogallo would muse, “if you could drive your car to the outskirts of town, unfurl a wing from the trunk, and fly out over the countryside?”

Working toward realizing that dream, Rogallo, along with his wife Gertrude, pursued the idea on their own time, testing a variety of designs in a small wind tunnel they constructed in their home. By 1948, the Rogallos had developed the first flying prototype: a completely flexible wing sewn by Gertrude from repurposed kitchen curtains.

As a civil servant working for the NACA (the precursor to NASA), any idea Rogallo conceived belonged to the government, so he took his invention to his superiors in hopes they would consider developing flying applications from the rudimentary design. The NACA engineers were not impressed. Conceding that they could see “no practical use” for such an invention, the NACA gave Gertrude and Francis Rogallo permission to develop the invention on their own, and the two were awarded a patent for the “Flexible Kite” in 1951.

From the outset, the Rogallos saw extraordinary possibilities, including kites that were large enough to transport a human. “Imagine the thrill,” Rogallo said in 1949, “of carrying such a wing to the top of a mountain and gliding into the valley below.” But sadly, the Rogallos could muster no interest from any professional aeronautical establishment. The design languished as a child’s toy and a hobbyist’s passion. That is, until Russia’s success with Sputnik shocked the world.

Suddenly interest in the unconventional flexible wing soared. The Army, Navy, as well the NACA’s successor agency, NASA, all had ideas for applications. Rogallo’s work with the flexible wing, dismissed by his coworkers as the “kite business,” was finally being taken seriously. The government’s interest would prove not only a vindication of Rogallo’s design, but it was also a potential patent infringement. Graciously, however, the Rogallos offered the government royalty-free use of their patent. Later, they were granted $35,000 for their efforts, the largest award ever given by NASA at the time.

NASA’s manned space program soon became the most imaginative and ambitious idea considered for the flexible wing. Rather than having the space capsule descend under parachutes to an ocean splash-down, a paraglider would be stored aboard the spacecraft and deployed during re-entry, allowing the astronauts—the most talented test pilots of the era—to fly the capsule in a controlled glide to airfield landings.

The idea had many proponents, including Gemini Project Manager James A. Chamberlin, but the development of a paraglider for Gemini was up against a hard-stop deadline. Gemini was a hurried bridge between Mercury and Apollo, and President Kennedy’s 1961 goal to put a man on the moon and successfully bring him home “by the end of the decade” placed a strict timeline on all phases of the program. The paraglider was an aerodynamic challenge to be sure, but ironically, it was backup parachutes that first derailed the program.

Mock up test capsules were costly, and before paraglider testing could begin, backup parachute recovery systems had to be proven. Repeated parachute failures wasted months of valuable time, and by mid-1962, the paraglider was delayed to the third Gemini flight, followed by still more delays later that year. It wasn’t until April 1964 that the entire flight sequence was demonstrated, and even then, the proof was piecemeal. One flight proved the paraglider’s deployment sequence, with the wing later jettisoned and the capsule recovered with conventional parachutes. But a second flight towed the already deployed paraglider to altitude, and it was flown to a piloted landing on a runway.

The challenge of perfecting all the operational procedures for the entire flight sequence—from deployment to gliding flight to touchdown—were complex enough but as Neufeld points out: “money wasn’t the biggest issue for the paraglider, as it was with much of Gemini. The biggest problem was the lack of time.”

The paraglider development program fell behind at its outset. North American Aviation engineers had won the relatively small paraglider contract based on some excellent developmental work during the summer of 1961, but soon thereafter they were awarded the multibillion-dollar Apollo contract. The best engineering talent was shifted to the Apollo program, at the expense of Rogallo’s paraglider.

By this time the writing was on the wall: Chamberlin, a staunch paraglider proponent, was out as director of the Gemini program, and though North American Aviation would finish out their contract with three more successful flights, it was too late. NASA spacecraft would splash down in the ocean with parachutes until the development of the Space Shuttle.

While the Gemini paraglider failed for the manned space program, Rogallo’s dream of simple, inexpensive flight ultimately was realized. The paraglider and related flexible wing designs achieved enough notoriety during the early 1960s to capture the imaginations of professional and amateur aeronautical engineers all over the world.

Basing designs on pictures from magazines and working with readily available materials like bamboo and plastic sheeting, early hang glider pilots built “Rogallo Wings” and flew them from low hills in California, while others built more sophisticated designs for towing behind water ski boats in Australia. By the time Neil Armstrong was stepping down on the moon, the modern sport of hang gliding was rocketing around the Earth.

As NASA’s interest in flexible wings flagged and funding dried up, Francis Rogallo took early retirement in 1970. He moved to Kitty Hawk, North Carolina, and continued his private research efforts. My family moved there the same year. There on the famous Outer Banks sand dunes, where the Wright Brothers first achieved sustained flight, hang gliding flourished and I grew up watching pilots, including the humble, retired NASA engineer, glide along the soft sand. My first hang gliding flights were in 1984, and I was lucky enough to meet Rogallo on a few occasions, even helping him fly a hang glider on his 75th birthday—22 years before his death, in 2009. And I was able to thank him. His invention has informed my life, from soaring small sand dunes to climbing thousands of feet inside thermals above California’s Sierra mountains, I’ve experienced the unparalleled joy, freedom and exhilaration of foot-launched aviation—the “thrill” Francis Rogallo imagined so vividly in the late 1940s.

Rogallo’s elegantly creative solution to the problem of spacecraft recovery ultimately led to the simplest form of personal aviation. When asked about the future of flexible wings, Rogallo once said, “Oh I think they‘ll go on forever now that they’re here. After all, once people learned to swim like fish, why, they never gave it up. Now that they’ve learned how to fly like birds, I don’t think they’re going to give that up either.” For my part, I plan to “imagine the thrill” for many years to come. 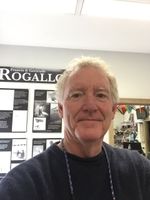 Billy Vaughn has been flying hang gliders for 34 years, and still teaches the sport on the dunes near Kitty Hawk, North Carolina. He is currently writing a biography of Francis Rogallo, and volunteers with the non-profit Rogallo Foundation in its efforts to establish a museum of the flexible wing.