Four elementary school students know there’s something terribly askew when they win a trip to visit Smithsonian’s National Air and Space Museum. For starters, the museum’s name is all wrong—it’s not the National Museum of the Air and Winds, right?

Also why has everything from Charles Lindbergh’s Spirit of St. Louis to the Wright Flyer, the world’s first airplane, been replaced by hot air balloons? It’s a mystery that the young sleuths must unravel in The Wrong Wrights, the first graphic novel in the new educational adventure series called Secret Smithsonian Adventures written by Chris Kientz and Steve Hockensmith with illustrations by Lee Nielsen and published by Smithsonian Books.

The mixed up, jumbled up tale brings to the foreground the lesser-known history surrounding the familiar tale of the Wright Brothers—Wilbur and Orville, who tinker and find flight—highlighting their younger sister and biggest supporter, Katharine.

Smithsonian.com spoke with co-author Steve Hockensmith about creating the series, which he describes as a fusion of Doctor Who and Scooby-Doo.

Tell me about the first time you visited a Smithsonian museum?
Oh wow. It would have probably been around 1978. My uncle and his family lived in Maryland, not far from the DC area, and we would go visit them every other summer. One of these summers, we went to National Air and Space Museum. Not to smack talk any other Smithsonian museum, but it was far and away my favorite. I loved the place for a few different reasons. I had a lot of interest in history, especially military history. Going in and seeing all the planes—they weren’t an image on a TV screen, but right there, up close, in real life. It was just fascinating to me. I was a nerd kid, a big Star Trek fan. It was a very special moment to stand next to the USS Starship Enterprise.

Where you always interested in comic books?
It's funny; it was right around that exact same period I started reading comic books….Green Lantern was one of my favorites. He’s a test pilot, which is interesting to think about now that I say this.

I absolutely always had a fondness for that form; I read comics and graphic novels on and off over the years. Within me always was the desire to write one, myself. I just never had the right opportunity. The business side of breaking in is rough; it's a very hard industry to get a foothold in. I was really lucky. My partner on this, Chris [Kientz], he had connections with Smithsonian and knew there was an opportunity to do graphic novels. He knew I was a published author and had done kid books lately and brought me in.

How did you first meet Chris?
This is a crazy coincidence; our sons went to the same elementary school in Alameda, California. But not only are we guys in the Bay area, who happened to be involved in publishing for kids, we also had other weird connections. He had worked on The X-Files and I had been the editor for the X-Files Official Magazine, so there’s a chance in 1998, I walked by him on a set in Vancouver, not realizing all these years later I would publishing books with him.

Did you always know you wanted to start the series with the National Air and Space Museum?
I can't recall why, but it was immediately obvious that we would start with the Air and Space Museum. My recollection of it is I went away and came up with three ideas and brought back this, this or this, and The Wrong Wrights would always be number one.  I bet a lot of it was that I did have this childhood trip there. I remember it so vividly. There was something to me so inherently exciting about the history of that, and so the opportunity to play with that it just rose to the top. 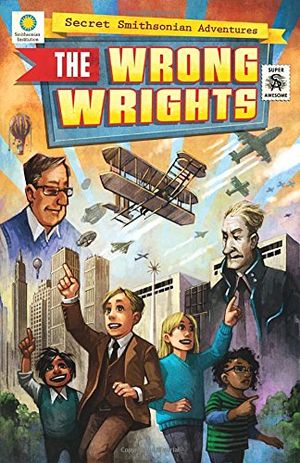 Schoolmates Dominique, Eric, Josephine, and Ajay are excited about a field trip to the Smithsonian's National Air and Space Museum. When they get there, however, they find a very different museum than the one they were expecting.

I loved learning about the pivotal role that the Wright Brothers’ sister, Katharine, played in their history. How did you first learn about her?
It was Chris, I believe, who mentioned her. When I came with The Wrong Wrights, I knew that someone was going to try to mess with the invention of airplanes. He was like, "That's great, there's this unsung sister. We've got to get her in there." I myself was unaware of how important she was—I like history and I dabble in history, but Chris has an amazing encyclopedic knowledge in history, and he knew about Katharine and he knew about the [Hudson-Fulton] exposition and he knew about the airship guy [Tom Baldwin] and the rival airplane development guy [Glenn Curtiss].

Talk to me about how you came up with the Smithsonian Archive Interface Facilitator, or “Smitty,” who helps the students when they time travel. Was the character based on any real-life curators?
He was literally a device. I'm trying to remember how he came about, probably over nachos. We were spitballing what would be the ongoing elements in the series. We liked this idea of always tying into the Smithsonian—the kids having a go-to link. Smitty is the personification of that; he is the Smithsonian, all its collected knowledge almost literally at their fingertips. But we wanted it not to be just an information dump, we wanted a personality because knowledge is an exciting thing; history is an exciting thing. We’re trying to make learning fun. You’ve gotta have the fun and gotta have the learning.

What influenced you when you created the Secret Smithsonian Adventures’ world?
We knew that we’re trying to do a graphic novel series for the kids, and we wanted them to interact with history and learn through the Smithsonian, in some way. They go there and time travel. So what are they doing? Why do they go to these places? All of this in a way builds on itself. Certain things influence consciously or subconsciously. Doctor Who was in my mind, what it used to be. I still have a great love in my heart for anything that has a time travel element, so being a Star Trek fan that was also in my mind. The way I envisioned how the kids stepped into the past, it's very much for me like when the holodeck door opens and there's this whole other place where you're really there. I liked doing it that way, it’s like an exhibit, but you can walk into it, which is a lovely metaphor for Smithsonian.

I also think of Scooby-Doo—you can find a million of examples where small kids go off and learn things, Magic Tree House for a younger age group, and I’m sure you can find others. For me, the one set in stone is the Scooby-Doo Mystery Inc. gang, a group of meddling kids who save the day.

For a story about the Wright Brothers, the reader never gets to know the real brothers. Was that a conscious decision on your part?
I knew almost instantly that the bad guys would be impersonating the Wright Brothers. If Katharine’s brothers were actually there, then they would have to have something to do and have the chance to talk. Before you know it, phew, you’ve added 15 pages. It kept things simpler.

Did you get to explore the Smithsonian’s archives to research The Wrong Wrights?
That was something we'd talked about, how much we would love to do it. Logistically, it wasn’t possible for this one, but once we turned in our stuff, it was reviewed by experts at the Smithsonian, both at the script stage and arts stage. They provided notes and I’m pleased too that we didn’t need a lot of corrections.

The last page talks about the liberties that The Wrong Wrights’s story takes with history. Why did you decide to change certain details like moving the location of their flight from Governor’s Island instead or Battery Park?
There were certain logistics, like we needed the kids to walk from where the planes had launched to Manhattan, so that streamlined the story.

You have two kids of your own, what do you hope they and other readers take away from this story?
I hope that kids enjoy it, and it sticks with them in terms of little-known details, like Katharine. There are so many people forgotten by history. It’s incredibly important for us to look back and recognize and ask why that person got forgotten. Why was it simpler, more convenient for people to tell these stories that way for all these years?

Can you tell me about any future Secret Smithsonian Adventures?
The next one is called Claws and Effect and it’s about dinosaurs and somebody who is trying to make sure the dinosaurs don’t go extinct, and so havoc ensues. Then, tentatively, Treason by George, where George Washington becomes king.