It was the spring of 2015 when Jennifer Lynch, the U.S. Postal Service’s historian, contacted me with an intriguing mystery.

A postmaster in Newaygo, Michigan, had received an envelope containing letters that appeared to have been written by a Union soldier named Nelson Shephard during the Civil War. The letters arrived in an envelope simply marked “Postmaster / Newaygo, Michigan” with the town’s ZIP code added by a different hand. There was no return address.

In Washington, D.C., at the National Postal Museum, curator of philately Daniel Piazza pronounced the letters to be authentic. But that only deepened the mystery. Where had the letters come from, and why had they suddenly reappeared now, more than 150 years later?

In any museum, provenance, or the history of any item, is critical in helping to understand and share its importance with the public. We needed to know how the letters got to us—who was the mysterious sender?

I contacted Smithsonian magazine for help in solving our mystery. The magazine’s impressive 1.8 million circulation, complemented by its website’s additional 6 million monthly readers, could get the word out, I thought, and the sender would reveal him or herself.

By now, the quest to solve the mystery enveloped dozens of our museum staff, the Postal Service and Smithsonian magazine. Steve Kochersperger, a USPS researcher who works for Lynch, did impressive research on Shephard. Beth Heydt, our collections manager, worked with the magazine staff to arrange a photo shoot to create an historically correct recreation of a Union soldier’s writing space. Surely the great photographs and the accompanying article, “Newly Discovered Letters Bring New Insight Into the Life of a Civil War Soldier” would bring the sender into the open.

The story by Franz Lidz, detailed the life of the young soldier Orrin W. Shephard, who had authored the letters proved wildly popular with Smithsonian’s online readers and last week an email from Courtney Cresta from Spring, Texas, arrived saying that her 78-year-old grandmother, Nancy Cramblit of Muskegon, Michigan, had mailed the letters!

Soon I was on the phone with Mrs. Cramblit, who revealed that she had found the letters amidst some papers belonging to her husband Marvin who died in 1978.

Marvin Cramblit, who was an avid yard sale and antique store fan, had purchased them, but Mrs. Cramblit had no idea from where or from whom. After reading the letters she wanted to return the letters to any surviving descendants of the Shepard family. So she mailed the letters to the Newaygo postmaster.

Something that Nancy and I have in common (aside from our name) is an understanding of how small town post offices operate. When I was doing my father’s genealogy I stopped by the town where he was born, Mendon, Missouri. Though the town has a population of just barely 200 people, it has a post office. That’s where I began my research. A small town postmaster knows everyone.

Postmaster Lori Boes knew she was holding history in her hands. The letters are now among the collections of Smithsonian’s National Postal Museum and the mystery of who sent them has been solved.

I was delighted to speak with Nancy Cramblit about how she found the letters and here’s what she told me.

I have to tell you that we’ve all been just wondering what on earth, where did these letters come from.  We had a lot of theories that we were going through, a lot of ideas. We were very, very curious because without the return address, who would send them and why. Where did find you the letters?

My husband passed away in 1978 but he was always dealing in junk. So I found the letter and eventually, I put it in with his funeral stuff and forgot about it. There was other letters that had his family name on it so I sent those to his family, and one day I was going through the funeral stuff and I found them. They laid on my desk probably another six months before I decided what I could do with them. Hoping they could find a family member, I put them in the mailbox.

And you addressed it to the Postmaster in Newaygo, Michigan, where the Shepherd family had lived in the 19th century?

Right. I didn’t put in the return address. I just addressed it.

Where did you see them next?

I subscribe to the Smithsonian magazine and I can’t say as I always read it, but last week I sat down to read it and I was floored. Oh my gosh, that’s the letters that I sent out. I couldn’t believe they went that far.

Tell us again about the experience of seeing the article.

It was a shock. I never realized what a historical difference they would make. It was just something I didn’t need hanging around here. But I couldn’t throw them away either.

Do you remember the kind of envelope of the stamp you used?

I probably used a Forever stamp, because that’s what I have. Envelope, probably just a plain envelope; I’m not sure.

Why did you not put your return address on the envelope?

I guess I didn’t think it was necessary for just what I had in mind.

When you found the letters, did you not want to send them to a local historical society?  What made you think the postmaster was the best place?

I wanted to find a family member. That was my idea. I figured if there were any family members in Newaygo, the Post Office would find them.

When you found the letters, were they wrapped in anything?

No, they were just in with others my husband had from his family.  He dealt in junk.  I never knew where he got the stuff he hauled home.

What made you think these letters weren’t from his family?

No, there was letters in the same box that were from his family but I’d say these letters were in some junk he brought home one day and he just stuck them in the same box.

So you could definitely tell the difference between his family letters and stuff he brought home that was junk?

Right, because the letters from his family had the family name on it.

Would there have been any connection between your husband’s family and the Shephard family?

I really doubt that. My husband was from Ohio and he got those family letters when his mother died, and his dad died.

Where did he shop for his junk? Is there a local store or did he go all across the county? Where do you think he might have found these letters?

Possibly at a yard sale, because he liked to go to yard sales.

Were you able to read them at all? I know that that handwriting is pretty hard to read.

I did read them at that time and put them back in the envelope. I thought it was very interesting, but I guess I did not realize the historical content or even how old they were.

So you don’t think these letters have any connection at all to your husband’s family.

And had you ever heard of the Shephard family of Newaygo? How far is that from you?

Obviously the letters were mailed from the soldier to his family, so they were held onto by someone in the family all this time, and probably just were put in an attic or passed down along. Tell me about that, Nancy.  You said you couldn’t throw them away so you sent them to the postmaster thinking that the postmaster knows everybody and can probably find the family.

Yes, because that’s not a very big town. Newaygo is a county but there’s also a town and it’s not a big town. So I think it’s a town where a lot of people know everybody.

I have a feeling what probably happened is that either it was an estate sale, someone died and they took all the stuff out and sold it, or somebody just found the letters in their house and they didn’t know it was their great-great-grandfather or great-great-uncle or something. Were there other things that you found from your husband that you’ve done something like this with, or was this pretty much the only thing that you sent away to find a home?

Yes, that’s the only thing I found that I sent to find a home, and like I say, he’s been dead since 1978.  My kids have taken stuff. In fact, right now, my kids are upset with me because I didn’t tell them about the letters and just sent them out.

Tell me about how you told your kids.  Did they know before the article or was that the first that they heard about it?

The first—I called one of my daughters when I read the article and then I called my granddaughter in Texas, which is Courtney Cresta. And then Courtney got online right away and found it, and posted it and my other kids seen it, and that’s when my kids called. How could you do that? Mom, you’d never told us about those letters? Well, I guess I didn’t think I needed to.

Well, we’re awfully glad you did that because now they’re in the collections of the Smithsonian Institution and there, they will see a wide audience and scholars will be able to visit them.

Do you by any chance have copies that I could have?

I think we could manage that. Now we have a good piece of history and I love that.

And my kids keep telling me, because I’m forever picking stuff up at yard sales, too. Mom, when you die we’re going to back a dumpster up to the door and load it.

Well, before they do that, tell them to call the Smithsonian.

Right, well, I know they won’t do it without going through it all, but that’s what they keep telling me. 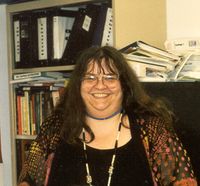