Meet Tessai, the Japanese Master Who Ushered in Modernism 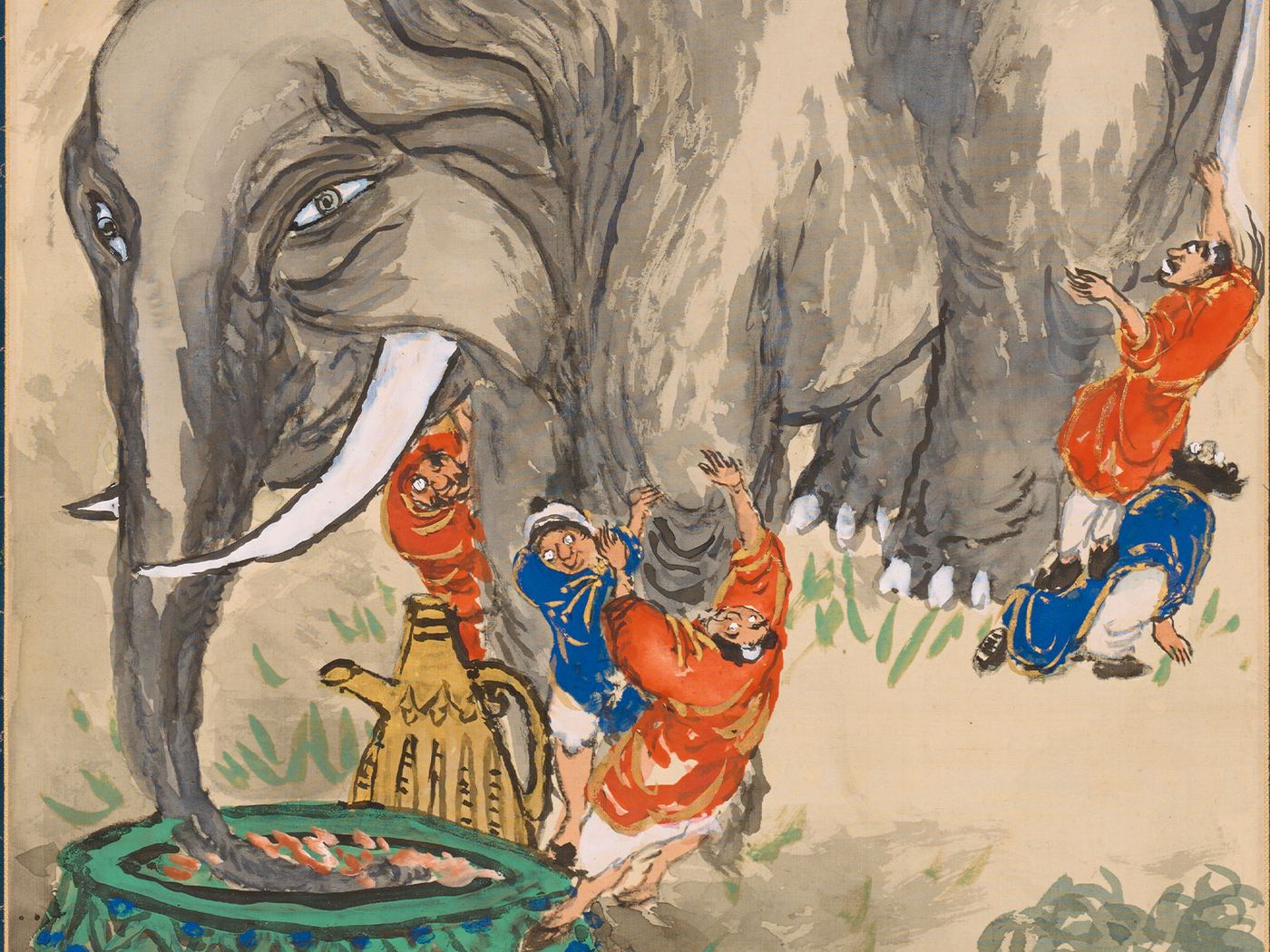 Tomioka Tessai was beloved for the personality and humor he infused in his work, with exaggerated expressions on his figures, and traditional scenes such as that of his 1921 Blind Men Appraising an Elephant (above: detail, 1921).

Freer Gallery of Art, The Mary and Cheney Cowles Collection

He dressed like an ancient monk but ushered in a new era in Japanese art.

Working at the turn of the 20th century, the artist Tomioka Tessai picked up on Chinese traditions newly available to Japanese travelers and scholars, and added a dash of his own personality to turn out art that, to some observers, shared similarities with the Impressionists and Post-Impressionists of the day.

“He gave himself this guise of recluse—growing out his beard, living in a messy house with I don’t know how many cats and all that,” says Frank Feltens, the Smithsonian’s curator of Japanese art. At the same time, he was a savvy operator who kept friendly relationships with the emperor and had connections with the management of a department store conglomerate that sold a lot of his work. So the artist, who died on New Year’s Eve 1924 at the age of 87, was “living in the real, modern present but at the same time using the past as a touchstone,” says Feltens, adding that because Tessai combined these aspects so seamlessly he would become one of Japan’s most important thought leaders of the time.

“Meeting Tessai: Modern Japanese Art from the Cowles Collection,” a succinct exhibition at the Smithsonian’s National Museum of Asian Art, is putting a new spotlight on the artist’s largely forgotten work, along with that of his most important mentor, the Buddhist poet and nun Otagaki Rengetsu. The exhibition represents the first major Tessai survey in half a century, and the display is culled from the Mary and Cheney Cowles collection that was donated to the museum in 2019. Over the course of the past five years, the Seattle couple turned over 260 works to the museum’s Freer Gallery of Art following their 20 years of collecting.

“For the Japan collections at the Freer Gallery, it’s the biggest and most significant addition to the collection, actually, since the founding of the museum in 1923,” says Feltens, who organized the show.

The Cowles’ interest in collecting work at the intersection of Japanese and Chinese art is well reflected in Tessai’s work. “This is really an emerging field of study,” Feltens says, “that is different than the way Japan’s modernity is usually understood as being Western-inspired.”

At a time when steamboats allowed more travel between the two Asian countries, the “longstanding presence of China in Japanese culture was being recognized and used as a touchstone to understand what it means to be Japanese at the time,” Feltens says.

“Tessai and people in the late 19th century had access to a lot of Chinese paintings that no other Japanese had seen before,” he says. “Ming and Qing paintings that were in those collections had not made their way to Japan before. So they were mind-boggling to them.”

“Tessai channeled these into these incredibly dense, incredibly expressive paintings that in many ways are extremely modern. This type of filling every inch of space, being almost obsessive about being as expressive and freewheeling as possible, is something that you barely saw before that.”

For all of this new manner of expression, he adds, the artist dressed and acted like a monk of another era. “Tessai was incredibly eccentric—he saw himself as a reincarnation of the famous poet Su Dongpo” says Feltens, because the artist was born in the same month as the 11th-century poet, who also published under the name Dongpo Jushi.

Tessai never went to China but was connected to many people who were, traveling there frequently and accessing work of the then-crumbling Qing court. He was also influenced by living for a dozen years with Otagaki Rengetsu, a now-famous activist nun and potter. “Her calligraphy and inspirations hark back to the 12th century, a time that she considered the pinnacle of virtuous rule, when the power of the emperor was strongest and Japan was at its most prosperous as a country and culture,” Feltens says.

“You cannot tell the story of Tessai or Rengetsu without the other,” the curator says, explaining the presence of both in the exhibition. And while Tessai’s style was “totally in your face,” filling every inch of a canvas, Rengetsu was restrained and meticulous, often with poetry inscribed onto her works.

Together they represent “two sides of the coin, the contrasts between them,” which is very appealing, Feltens says. Tessai was beloved for the personality and humor he infused in his work, with exaggerated expressions on his figures, and traditional scenes such as that of his 1921 Blind Men Appraising an Elephant, in which eight robed men flail around a pachyderm, each touching a different part of the animal’s body and all with various exasperated expressions, creating a comic tableau out of the Indian parable.

“Tessai revives and recontextualizes that story into this funny image, where these men are creeping and crawling all over the animal, so there’s a huge sense of humor [in his work, but] also toward himself,” Feltens says. “He wasn’t afraid of making himself a bit goofy.”

The sheer expressiveness of his work drew comparisons to Western Post-Impressionists, with the German architect Bruno Taut likening Tessai’s work to that of Paul Cézanne and declaring it “really great modern art.”

Writing in the 1950s, Taut was “very smitten by Tessai and called him Japan’s version of the Impressionists, because he was seeing these paintings as a visceral expression of the artist’s whims and feelings in the same way as Impressionists in Europe didn’t seem to paint what they saw in front of them, like everybody else saw it, but how they perceived that scenery,” Feltens says. “To Taut, Tessai did the same thing, but in Japanese art.”

While Tessai was aware of trends in Europe and America, he never considered himself an Eastern Cézanne, as others did.

The museum’s founder, Charles Lang Freer, did meet Tessai three times while visiting Japan at the turn of the last century. Freer “didn’t buy a painting, but he talked to Tessai about art,” Feltens says.

The show, which opened in August, will have three rotations, the curator says. “We rotate paintings and calligraphy every six months. So the exhibition is going to have completely new works installed in six months’ time. And then another.”

All told, there will be 45 different works of art on display over the course of the exhibition.

The art world may seem flooded with elegant Rengetsu pieces in particular, but Feltens says a lot of them are fake. “This is why we are so lucky to have Cheney’s collection,” as he was a collector able to discern the real thing.

Tessai, for his part, was “was one of the first Japanese artists to be exhibited in America after World War II, as a gesture of peace and reconciliation in an exhibition organized by the Smithsonian at the time,” he says, “and then suddenly he was forgotten.”

Exhibitions in Japan of his work dried up in the 1960s and ’70s, Feltens says. “So this is a rediscovery of Tessai, really, that has already gotten a bit of attention in Japan. Every museum now that has a Tessai is trying to get in touch, pretty much, because there is this resurgence of interest in this area. There’s joy also among our Japanese partners and audience that we are highlighting this artist, who many scholars have really loved but never thought of reviving.”

“Meeting Tessai: Modern Japanese Art from the Cowles Collection” continues at the Smithsonian’s National Museum of Asian Art in Washington, D.C. through February 18, 2024.