At the onset of the Great Depression, a time when financially distressed Americans eagerly sought entertaining escapes from their economic woes, a radio program based in 19th-century stage traditions of blackface minstrelsy became a favorite broadcast over the country’s airwaves.

For more than 30 years, between 1926 and 1960, white comedians Freeman Fisher Gosden and Charles J. Correll wrote and performed “The Amos 'n' Andy Show.”  As many as 40 million people—over half of the nation’s radios—tuned in each week to hear the adventures of Amos Jones (Gosden) and Andrew Hogg Brown (Correll), the hapless proprietors of the “Fresh Air Taxicab Company of America, Incorpulated.”

In a professional studio photograph from around 1935 and now in the collections of the Smithsonian’s National Portrait Gallery in Washington, D.C., Gosden stands at right, one hand gripping the lapel of a slightly rumpled suit coat worn over shabby, wide legged pants. A cigar is clamped tightly between his teeth and his free hand rests authoritatively on the shoulder of Brown, who dejectedly sits beside him on a barrel. Both men have covered their faces and hands with black makeup made of burnt cork, taking care to outline their lips in bright white paint, and each wears a wooly black wig that mimics an African American hair type. Gosden’s eyes peer haughtily down his nose from beneath the bowler hat that completes his all-business outfit of suitcoat, collared shirt and tie.

In contrast, Correll, is dressed in shirt sleeves and a vest, threadbare trousers and boots. He wears a comedic, hangdog expression, frowning as though deeply weary from the unfair trials that the world has repeatedly set before him.

Begun as a local 15-minute show out of Chicago before being picked up by CBS and then NBC, which lengthened it to 30 minutes, the aural format of the “The Amos 'n' Andy Show” allowed Gosden and Correll to transform the comedic component of traditional minstrelsy performance into something new. While pre-radio minstrelsy featured a variety of vaudevillian segments including songs and dance performances, with their radio show, the two men stressed the oral aspects of form, since in the visual, physical and stage-bound components could not be accommodated by radio’s aural format.

Every Halloween, amidst the year’s annual parody of political figures and pop-culture heroes are the less welcome costumes. With faces covered in brown makeup and dreadlocked wigs; buck-toothed “ninjas” wielding fake nunchakus; “bad hombres” wearing bandoliers, serapes, and sombreros; and “Indian maidens” in beaded buckskins, feathered headdresses, and moccasins, these insensitive choices make masquerade of whole groups of people and their ancestors. Based on mythic or exaggerated ideas of ethnic and cultural difference, they also have painful performative origins deep in American history and culture.

On-stage, blackface minstrelsy was most popular immediately following the post-Civil War period of Reconstruction, when the country was trying to grapple with reforming itself and adapting its social hierarchy following the end of race-based slavery. However, its revenants have persisted and evolved well into the 21st century.

In his landmark study, Love and Theft: Blackface Minstrelsy and the American Working Class, scholar Eric Lott argues that familiar practices of racial crossdressing and public performance emerged from colonial carnivals, election day festivals and the theatrical distractions created by Irish American working class men in mid-19th century New York City. Lott says that blackface minstrelsy was as much about the desire to appropriate an exaggerated idea of black performance as it was in socially repressing and demeaning those communities it emulated.

When eager Americans gathered around their radios each week to listen to “The Amos 'n' Andy Show,” they leaned in to hear voices that performed exaggerated ideas of blackness. In their scripts, Gosden and Correll relied on grammatical acrobatics, malapropisms, and the exaggerated mispronunciation of words, which supposedly demonstrated the intellectual and cultural inferiority of their characters.

In Voice Over: The Making of Black Radio, scholar William Barlow recounts contemporary criticism from African American leaders who condemned the show’s dialog as crude, demeaning and moronic. Represent: 200 Years of African American Art in the Philadelphia Museum of Art

This publication highlights nearly 150 objects in the collection of the Philadelphia Museum of Art that were created by American artists of African descent.

Barlow also notes the contributions that the show made to American vernacular English, including the saying, “Holy Mackerel,” which soon became a part of everyday slang.

Despite its offensive nature to many audiences, the popularity of the show was widespread and led to the production and consumption of all sorts of promotional products from candy and lapel pins to paper dolls.

While their contemporary radio audience would have immediately known Gosden and Correll by their distinctive voices, recognizing their physical appearance was less assured. Therefore, in order to create and inhabit their characters for publicity photographs, the actors presented themselves for the camera fully costumed and in ubiquitous blackface makeup. In this way, they were able to materialize the culturally conditioned fantasies of their listeners.

The performative tradition that Gosden and Correll adapted in “The Amos 'n' Andy Show” had reached its zenith before either man was born, but its legacy persists long after their deaths and well into our present day. It was not until the late-1950s, when the rise of photojournalism and the spread of television gave greater visibility to national civil rights protests, that the kind of blackface performance, which featured burnt cork makeup and bright white lips all but ceased to be reproduced in American visual culture. 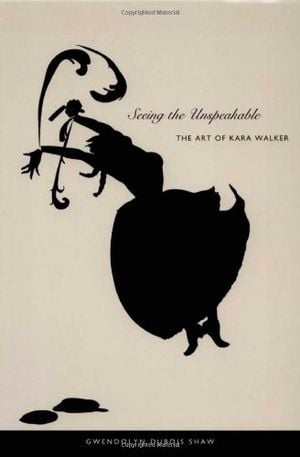 Seeing the Unspeakable: The Art of Kara Walker

Examining Walker’s striking silhouettes, evocative gouache drawings, and dynamic prints, Gwendolyn DuBois Shaw analyzes the inspiration for and reception of four of Walker’s pieces: "The End of Uncle Tom" and the "Grand Allegorical Tableau of Eva in Heaven," "John Brown, A Means to an End," and "Cut."

Unfortunately, only slightly milder forms of blackface and its equally degrading cousins yellowface, redface and brownface, still make frequent reappearances in popular culture and in the entertainment industry.

Whenever a white actor’s features are deliberately changed and their mannerisms are exaggerated in order to inhabit the role of an ethnic minority in films and television we see the reappearance of this highly problematic practice.

Instances of racial masquerade also appear in contemporary music and on talk radio with disturbing frequency.

But it is on Halloween, that most American of holidays, that the ghosts of Amos and Andy rise again, to walk the earth, and haunt our dreams of one day living in a truly post-racial society.

Gwendolyn DuBois Shaw is senior historian and director of history, research and scholarly programs at the Smithsonian's National Portrait Gallery.

Gwendolyn DuBois Shaw is the author of several books and exhibition catalogues, including Represent: 200 Years of African American Art in the Philadelphia Museum of Art,
Portraits of a People: Picturing African Americans in the Nineteenth Century and
Seeing the Unspeakable: The Art of Kara Walker.