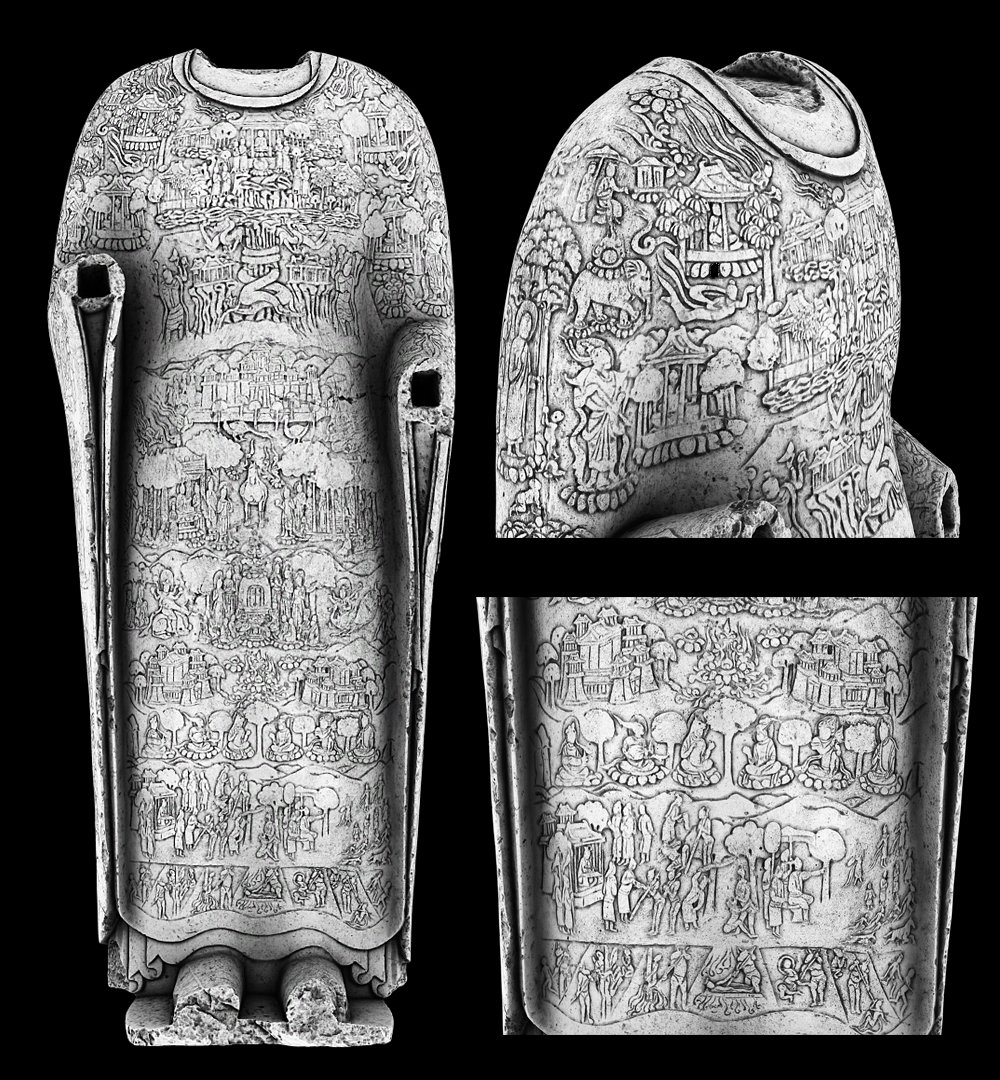 Deities in paradise, souls suffering in hell, jealous demigods and flying spirits, mortals gathered for debate—all these and more are depicted on the “Cosmic Buddha,” an extraordinary life-size sculpture on view in the Freer Gallery. Keith Wilson, a curator at the Freer, considers “Cosmic Buddha” the centerpiece of “Promise of Paradise,” the gallery’s exhibition of early Chinese Buddhist sculpture.

The “Cosmic Buddha” was probably made in northern China between 550 and 600 A.D., a period of great vitality for Chinese Buddhism during which the faith enjoyed imperial patronage and believers came from all strata of society. The painstakingly crafted scenes of "Cosmic Buddha” reflect the growing sophistication of Buddhist art; their layered landscape elements, diagonals and vanishing points convey a sense of space receding into the distance.

Every inch of the "Cosmic Buddha" is filled with intricate relief carvings that depict a “conceptual map” of Buddhism’s Six Realms of Existence, from the heavenly realm of the devas at the top to the hot and cold hells of the dead at the bottom. Although the sculpture looks like a human figure dressed in robes, Wilson believes that the surface scenes should be interpreted not as textile patterns but as "emanations from within," in keeping with Vairochana's cosmic nature. This explains why the scenes mingle contiguously, organically, with no clear boundaries between them.

Traditionally an object like "Cosmic Buddha" could only be studied through direct observation, rubbings of the surface or, later, photography; the new imaging method, by contrast, retains the work's 3D character, is completely noninvasive, and allows researchers to see things that cannot be observed with the naked eye.

"With the scanning process, I'm able to map the entire surface," says Wilson. "It's allowed me to see what the boundaries of the scenes were, analyze what the content specifically is. . . and make the information accessible to visitors and scholars."

Some aspects of the sculpture remain shrouded in mystery. No one knows who commissioned it, where it was carved or discovered, how the hands and head were lost. But with the help of 21st-century technology, scholars will be able to see more of its ancient universe than ever before.

At this point, Wilson believes that "Cosmic Buddha" was a teaching sculpture, likely used in a monastery. "The scenes are so complicated and the sources are so diverse [that] they really require a narrator to explain what’s being shown," he says.

Let us, with Wilson’s help, be your narrator. Click on the icons in the image above to learn more about the scenes depicted on the “Cosmic Buddha.”

This video was the result of the work by the Smithsonian’s 3D imaging team, who have been scanning the sculpture since fall 2011, registering every nook and cranny to create precise 3D views from every angle. These images were stitched together digitally and loaded into software that will allow users to move, light and manipulate the object in ways that are physically impossible.