Invented by a Woman Activist, an Early 1970s Rape Kit Arrives at the Smithsonian 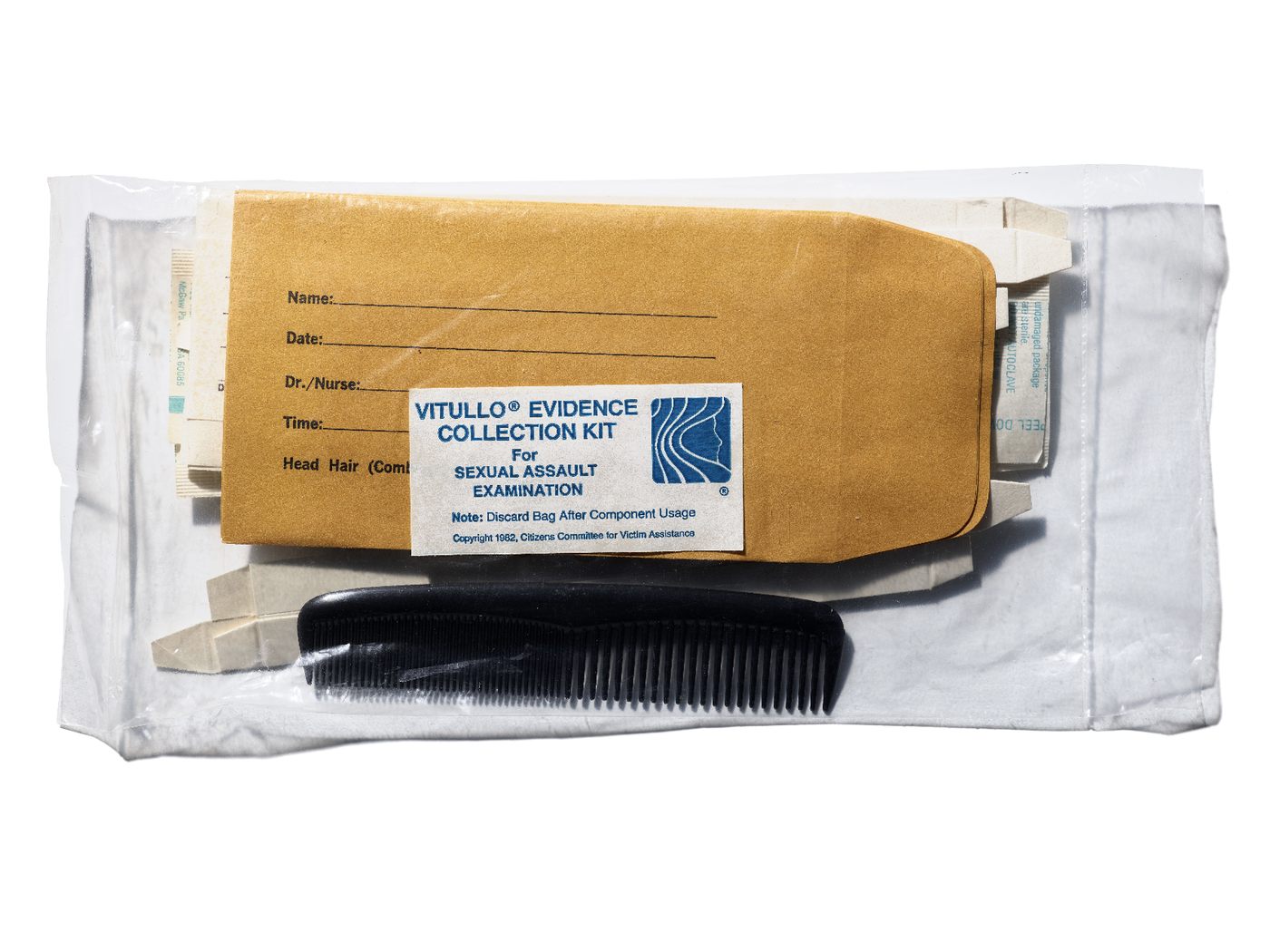 While volunteering at a crisis hotline for teenagers, Martha “Marty” Goddard knew she had to do something. It was 1972 in Chicago, Illinois, when Goddard became aware of the tens of thousands of sexual assault cases that were not being prosecuted due to a lack of standardized protocols for collecting the forensic evidence necessary to secure a conviction.

She began interviewing policy makers, survivors, attorneys, hospital workers and anyone who could provide insight. She wanted to design a system that would allow sexual assault cases to be addressed and prosecuted efficiently.

In the early 1970s, women rarely had the courage to report sexual abuse and when they did come forward, their accounts were often challenged and undermined, and any evidence of a crime committed was carelessly lost or mistakenly thrown away. It was also a time when spousal rape was considered legal—and incest and child sexual assault were considered rare. It would be nearly another quarter century that the “marital rape exception” was eliminated in all 50 states in 1993.

In Chicago in 1973, only a tenth of the estimated 16,000 sexual assaults were ever reported to the police, with only a few going to trial; and hardly any resulted in the aggressor’s imprisonment, says Pagan Kennedy, the author of Inventology: How We Dream Up Things That Change the World. “Amid all that, Ms. Goddard began asking questions that might seem so obvious to us today but were radical in her own time,” wrote Kennedy in an article for the New York Times. “What if sexual assault could be investigated? What if you could prove it? What if, instead of a ‘she said’ story, you could persuade a jury with scientific evidence?”

Now, the National Museum of American History and Cooper Hewitt, Smithsonian Design Museum have announced the joint acquisition of the historic kit that Goddard envisioned and that would standardize the process of collecting and preserving evidence of sexual assault. “Marty Goddard developed the design for the kit by speaking to the people who would ultimately use it—medical professionals, law enforcement, litigators and survivors—so each component and the instructions that go with them are a result of that collaborative research,” says Alexandra Cunningham Cameron, a curator of contemporary design at the Cooper Hewitt.

The “Vitullo Evidence Collection Kit for Sexual Assault Examination” contains “off the shelf" products such as cotton swabs, a comb, paper bags, labeled envelopes and glass slides for semen specimens. It also holds a checklist of protocols and different forms for both the examiners and the victim, including treatment and counseling resources. The simplicity of the kit made it easily replicable and affordable, increasing the probability that it would be adopted, says Cunningham. The design was also adaptable, meaning that hospitals and police precincts around the world could modify it to suit their specific needs.

Reached at her home in Somerville, Massachusetts, Pagan Kennedy, who is writing a book on Goddard’s efforts, says that it was her interest in the politics of design that drove her to start thinking about her story. “I was just really fascinated with this object, as it seemed to come from the point of view of a survivor and would help them tell the story of what happened,” she says.

When Kennedy began looking at sources to unpack the history, she found that most gave credit to Louis Vitullo, a Chicago police sergeant who headed up the microscope unit and who had died in 2006. Marty Goddard was sometimes described as Vitullo’s helper—or was not mentioned at all.

“I became very curious about Marty, but there was nothing I could find about her,” she says. “I’ve done a lot of pieces where I track down people who have invented things, so I’m very good at finding the obscure. I couldn’t find anything saying she was dead, so I had to assume that she was alive. And that set me on this obsessive hunt for her.”

Kennedy spoke with Cynthia Gehrie, Goddard’s friend and colleague in the 1970s, and learned that the first time Goddard introduced herself and described her idea for the kit to Vitullo, he wasn’t very interested. Yet, later, Vitullo created a prototype for the kit, and presented it as a partnership between the police department and the state attorney’s office. Goddard was not credited for the invention. But instead of worrying over recognition, she focused her energy on its distribution and expansion. And that’s what mattered to her.

She then began training people, finding sponsors and developing a system. The initial funding for the kits came from the Playboy Foundation, a champion feminist causes. Playboy’s founder Hugh Hefner considered “the women’s liberation movement as a sister cause to his own effort to free men from shame and guilt,” wrote Kennedy.

In 1978 Goddard delivered the kits to about 25 hospitals around Chicago as part of a pilot program she created. A year later, almost 3,000 kits were sent to crime labs. “This was the '70s and '80s—and often the case nowadays—when sexual assault was such a forbidden topic that testimonies and experiences were dismissed or denied,” says Katherine Ott, curator in the division of science and medicine at the American History Museum. “So, taking their testimony or their experience seriously was one of the big hurdles to get over. And a way to support their statements was to have concrete evidence. The kit brought order to the process.”

The invention’s impact continues to resonate. In the U.S., a sexual assault is attempted every 68 seconds. Commonly known as the “rape kit,” tools inspired by Goddard’s invention are still being used in hospitals across the country.

“Smithsonian staff collected this kit not to shock audiences, but to interpret the story of a woman activist and how her work as a victims' advocate—specifically around sexual assault—continues to influence conversations around the topic today,” writes Angela Tate, curator of women's history at the Smithsonian National Museum of African American History and Culture.

The object was purchased with support from the Smithsonian American Women’s History Initiative #BecauseofHerStory, which aims to amplify the untold stories of American women throughout history. Five Smithsonian units have formed “Marty’s Group,” with the aim of spotlighting how Americans have combatted sexual assault through activism, political advocacy and artistic confrontation.

“Sexual assault is shamefully common, and its cultural roots have very little public understanding,” Ott says. “There’s no word in our vocabulary for the lingering damage that follows people throughout their lives. And a lot of survivors talk about their experience with reporting and prosecution as their second assault, which is very horrific for many people. And that's where the kit comes in.”

Although there might have been one or two other evidence collection kits for sexual assault cases at the time, they weren’t part of a specific system. More than a kit, says Kennedy, Goddard created a culture. “In the '70s, the sexual assault exam would be used to determine, by the police, whether they thought the victim was 'really raped,' and they made judgements against the victim,” she says. “It was almost like a virginity test. But this is not about policemen or doctors deciding what they think about the 'purity' of the person. One thing Marty Goddard did was build this much bigger system with a whole set of really trained people who understood trauma and knew that they weren’t there to judge, but to collect evidence.”

In her search, Kennedy finally learned that Goddard had died in 2015. She also learned that Goddard, herself, had been a victim of sexual assault in the late '70s. “The assault was the beginning of the end for her,” Kennedy says. “It was a turning point in her life that left her with very deep scars—both physically and mentally. She was doing all this fundraising, fighting for a different culture in criminal justice, and she started burning out. It was too much. And that’s when she started drinking.”

Although Goddard recoiled into her own world in her last years, she revolutionized sexual-assault forensics. With the acquisition of the kit, Smithsonian curators hope to elevate Goddard’s contribution and create a space for dialog where complex challenges can be discussed.

“We know what caused the Civil War and its impact—there's a huge literature on that. But there are many other difficult histories like sexual assault that need examination,” Ott says. “And so, every little bit of information that can contribute to this public understanding is great, because we need to chip away at the cultural silence, disbelief and discomfort. That’s the only way we can end it.”

The “Vitullo Evidence Collection Kit for Sexual Assault Examination” is not currently on display, but it can be viewed online.