I remember the first time I left Earth. It was 1957 and my mother and I flew from our home in Los Angeles to Portland, Oregon, aboard a Douglas DC-7. My mother wore a nice dress and gloves. At 7, I was dressed in my first suit. The “stewardesses” called me “Master Gates,” which made me feel very important, even though my mother had to explain what that meant. And as the plane descended into Portland, they asked me if I would help them pass out gum to the other passengers.

By the time Neil Armstrong and Buzz Aldrin set foot on the moon I was 20 years old and filled with interplanetary wanderlust. My father was an aeronautical engineer in Lockheed’s famous Skunk Works. His top secret work had long fueled my imagination. The day after the moon landing, I called Pan Am to book my reservation on the first commercial flight to the moon.

“I’d like to make a round-trip reservation to the moon,” I told the agent on the other end of the line. And, without skipping a beat, she replied, “For how many passengers, please?” I was making a reservation for well into the future.

“For two,” I said. “For my wife and me.” I wasn’t married yet, so when she asked for my wife’s name, I told her I didn’t know it. But I assured her I would be by the time my flight departed. Pan Am estimated that would be around the year 2000. At first the agent wouldn’t accept a reservation for my wife-to-be without a name.

“Just put down Mrs. Gates,” I said. A few weeks later, I received my “First Moon Flights” Club card in the mail. It was my ticket to ride.

In 1964, Gerhart Pistor, a journalist from Vienna, Austria, contacted a travel agent to make a reservation to go to the moon.

“Pan Am, probably somewhat in jest, took the reservation,” says Weitekamp. “And out of that, the airline got some wonderful publicity and turned that into the "First Moon Flights" Club. You could call and make a reservation to go to the moon and were issued an official card that put you in a queue for when they were making their moon flights. At the time, Pan Am was the leader in global flight, so this seemed like a natural next step if we were going to go to the moon.”

Pan Am’s futuristic Orion III space plane, as seen in Stanley Kubrick’s 1968 film 2001: A Space Odyssey, made that future easy to imagine. With flight attendants preparing food and attending to passengers, everything but the view out the window was something I had already experienced.

It was a hot and steamy July evening nearly 50 years after I made my Pan Am reservation, my wife (her name is Susie) of 23 years, our two daughters, and I stood waiting at the entrance to the National Air and Space Museum in Washington, D.C., with hundreds of others on the occasion of the museum’s 40th anniversary. I had just donated my Pan Am “First Moon Flights” Club card to the museum to be displayed in Boeing’s newly renovated Milestones of Flight Hall. We were there to see the exhibition and, of course to see my card on display. It was the realization of a promise I had made to a Pan Am reservation clerk many decades ago, but with a twist.

Weitekamp had told me the initial ideas for a flight to the moon began in the early 1960s, first with the Soviet Union’s Yuri Gagarin’s orbit of the Earth on April 12, 1961 and with Alan Shepard’s suborbital flight three weeks later. On May 25, 1961, President John F. Kennedy, in a speech to a joint session of Congress, announced the United States would put a man on the moon by the end of the decade.

“It’s a bold and political choice made in 1961 that puts the human space flight program on a path to the moon,” Weitekamp says. “But, it also taps into dreams of what space flight would be—that it would go quickly from tenative flights into orbit to a destination.”

In 1971 Pan Am stopped taking moon reservations and within two decades, the airline declared bankruptcy, a victim of soaring fuel costs and government regulations. So along with all of the other "First Moon Flights" Club members, I was stranded.

I was curious why the museum wanted one of these cards for its collection. Weitekamp explained she was interested in the “popular reception and enthusiasm for spaceflight.”

“With the current interest in commercial spaceflight,” she told me, “the card is an early example of the public’s interest in and the hope that traveling off-planet would someday become as routine as commercial airplane trips. When Pan Am began taking reservations, there was a very enthusiastic response.”

When I asked Weitekamp whether others had offered theirs, she told me many said they had had one and perhaps could find them. But with my very low reservation number, she wanted mine.  She was also intrigued by my story. While the object itself is important, she said, the piece’s cultural and social provenance sheds light on the period of moon flights in the late 1960s.

“Your story speaks to the optimism that this future is really going to unfold,” Weitekamp told me. “One of the things we wanted to do with the Milestones Hall was to show these big signature technologies have all these other stories woven into them. Space Ship One, for example, isn’t only a commercial vehicle that was developed without government support; its developers wanted to tap into this long-held dream that people want to be able to buy a ticket to space the way they buy an airplane ticket.”

Weitekamp wanted to convey the lasting impact and legacy of this achievement. The Pan Am card documents the popular enthusiasm for human spaceflight and a business seeing the opportunity to promote itself by tapping into this cultural interest in human spaceflight. This, she says, provides some context to these large technologies on display in the hall.

As we stood in front of the display with the story of my card in the museum, I wanted to point it out to everyone who stopped by. When a docent walked up I said, “That’s my card!” “Oh, you have one of those,” he replied. His reaction seemed a little subdued. “No, that’s my card,” I said again, this time pointing to my name. “That’s me.”

“Oh my, that’s you?! Wow. This is the best thing to happen to me today. I can’t wait to tell people on my docent tours I met you,” he said, shaking my hand.

Here's the twist, I had kept my promise to the Pan Am agent to be married, but commercial flights to the moon are still a futurist's dream.

A few weeks ago my wife Susie asked me, “If you had the chance, would you go to the moon now?” “Only if you come with me, Mrs. Gates,” I replied. 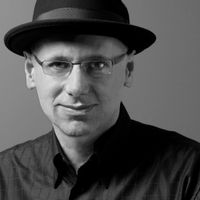 Jeff Gates from the Smithsonian American Art Museum is the managing editor of the museum's blog Eye Level. In addition, he is a writer, photographer, and graphic designer, interested in the social nature of art and American culture. His articles have appeared in The Washington Post, The Atlantic, National Public Radio, and Medium.