Turtles stand alone among living and extinct backboned animals because of the unique hard shell that encases their bodies. Other animals, like the armadillo, evolved body armor, but the turtle shell fully integrates the backbone and trunk ribs.

How did this unusual structure evolve? One of Aesop’s fables tells of the wedding of Zeus and Hera. Hermes had invited all the animals, but the turtle did not show up. When an angry Hermes demanded to know why it had not come to the feast, the turtle responded that it preferred its own home. Enraged, Hermes made the animal carry its house forever after.

Last year my colleague Rainer Schoch and I published our own version of how the turtle got its shell under the less entertaining title “Osteology of the Middle Triassic stem-turtle Pappochelys rosinae and the early evolution of the turtle skeleton.”

For many years, the oldest known members of the turtle lineage were Proterochersis and Proganochelys, which are best known from Germany and Poland. They are about 210 million years old. Although less advanced in many ways than present-day turtles, these two stem-turtles already had fully formed shells, providing little insight into the origin of the turtle shell.

The origin of a biological structure as complex as the turtle shell confronted zoologists with a dilemma. Unless a complete shell suddenly evolved, its development would have taken place in a number of steps. This puzzled researchers because it was not clear what survival advantage each intermediate step would confer. Until just a few years ago, the major problem in searching for fossils of turtle precursors was that paleontologists could not easily imagine what something on the way to becoming a turtle might look like.

Several researchers suggested that bony plates embedded in the skin, called osteoderms, which are found in crocodilians and some other reptiles, had fused to the underlying bones of the turtle to form a solid bony shell. This idea was refuted by zoologists, who since the early 19th century, have studied modern turtle embryos to trace how the shell develops. Their work established that the various parts of the shell develop from different parts of the skeleton. Much of the carapace is derived from the backbone and ribs. Within a disk of connective tissue on the back of the turtle embryo, the trunk ribs broaden and grow straight out to the sides, rather than curving downwards to enclose the trunk as it does for most reptiles.

The first fossil reptile showing some resemblances to turtles was discovered in 260-million-year-old rocks in South Africa in the 1890s. This unusual animal, called Eunotosaurus, has a short trunk with unusually broad and strongly curved ribs, which partially overlap one another. However, it differed from turtles in many ways, and paleontologists long dismissed the similarities between the two as the result of independent evolution. Based on studies of more recently discovered fossils of this reptile, my former Smithsonian colleague Tyler Lyson and his collaborators recently revived the idea that Eunotosaurus was a distant precursor of turtles.

In 2008, the discovery in China of a nearly 220 million years old fossil of an undisputed turtle precursor, represented a major advance in our understanding of the evolution of the turtle shell. This reptile, Odontochelys, apparently lived near or in coastal waters. The fossil has broad, rather straight trunk ribs and lacks any kind of carapace. The great surprise was that it already has a fully formed plastron covering its underside, just as in present-day turtles. Odontochelys was a stem-turtle on a half shell. 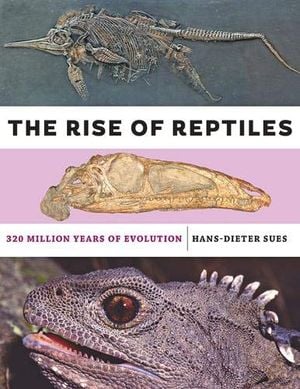 The Rise of Reptiles: 320 Million Years of Evolution

With this single meticulously researched volume, Hans-Dieter Sues paints a complete portrait of reptilian evolution. Numerous photographs of key specimens from around the world introduce readers to the reptilian fossil record, and color images of present-day reptiles illustrate their diversity.

In 2015, in a 240-million-year-old lake deposit in southern Germany, Rainer Schoch and I identified skeletal remains of an even earlier stem-turtle, Pappochelys, which is Greek for “grandfather turtle.”

In life, Pappochelys would have resembled a small chubby lizard more than a turtle. Its trunk ribs are broad and extend mainly sideways from the backbone. Unlike Odontochelys, the chubby Pappochelys lacks a plastron but has an extensive layer of rib-like bones embedded in muscles of the abdomen. However, these belly “ribs” resemble the slender bony growths in modern turtle embryos that eventually fuse to each other and become the plate-like bones of the plastron. Zoologists had long hypothesized that much of the plastron of turtles evolved from the belly “ribs” in a reptilian precursor.

In terms of both anatomy and geological age, Pappochelys seems a perfect intermediate between Eunotosaurus and Odontochelys.

Following the discovery of Odontochelys in marine rocks, some paleontologists argued that turtles originally evolved in water. This could explain the half shell protecting the underside of Odontochelys: many aquatic predators attack their prey from below. However, Eunotosaurus and Pappochelys were land-dwelling animals with their undersides close to the ground.

In discussing the origin of broadened ribs in the turtle lineage, Tyler Lyson noted that Eunotosaurus has hands that are larger than the feet and bear large claws. The robust arm bones have large attachment points for powerful muscles. These muscles could have forcefully pulled the arms back. Together, these features indicate that Eunotosaurus was a capable digger. Its broad, partially overlapping ribs would have stabilized its trunk to assist the arms during digging. However, an inflexible trunk would have slowed the animal down while moving, making it vulnerable to predators. Further expansion of the ribs and bony outgrowths from parts of the backbone would have eventually fully encased the trunk.

These recent fossil discoveries beautifully illustrate major steps in the evolution of the turtle shell. The initial step, the broadening of the ribs, was apparently not related to protection. It formed a rigid trunk region for digging. Later, additional expansion of the ribs into bony plates would have transformed the developing shell for increased protection.

Hermes’ curse proved to be an evolutionary advantage for turtles.

Hans-Dieter (Hans) Sues, senior scientist and curator of fossil vertebrates in the department of paleobiology at the Smithsonian’s National Museum of Natural History, wrote The Rise of Reptiles (2019), co-authored Triassic Life on Land (2010), and edited or co-edited several volumes and special issues on vertebrate paleontology and paleoecology.