How the Block Party Became an Urban Phenomenon On the night of August 11, 1973, Cindy Campbell became the First Lady and Mother of Hip-Hop. It all started in the recreation room she rented inside of her apartment block at 1520 Sedgwick Avenue in the West Bronx, New York.

Campbell and her brother, Clive, an aspiring disc jockey going by the name DJ Kool Herc, threw a "Back-to-School Jam" that lasted into the early morning. The party’s purpose was to help Campbell raise funds for the purchase of a “fresh” back-to-school wardrobe. By the night’s end the brother and sister duo had grossed $300 after charging an entry fee of 25 cents for the ladies and 50 cents for the fellas.

The indoor space, which held only enough room for a few hundred people, was packed tight with high school kids entranced by the soul and funk mixes Herc played over his Kingston, Jamaican-style sound system.

The dance eventually poured outdoors into the neighboring Cedar Playground and that night when the music genre hip-hop was born, simultaneously the historical jam session became the first in a series of popular block parties.

By the following summer, Herc, the burgeoning DJ from Jamaica, who owned the loudest sound system in the neighborhood, had garnered fame and a local and loyal following. So Herc decided to headline a free party on the block.

“After the block party, we couldn’t come back to the rec room,” Herc explained to Jeff Chang, author of the award-winning 2005 book, Can’t Stop Won’t Stop: A History of the Hip-Hop Generation.

On August 13, 2022, the Smithsonian’s National Museum of African American History and Culture (NMAAHC) paid homage to the famous rec room jam session with its own star-studded “Hip-Hop Block Party.” The event celebrated the one-year anniversary of the debut of the Smithsonian Anthology of Hip-Hop and Rap, a multimedia collection exploring the genre’s national and worldwide influence stemming from its early days in the parks of New York City.

Dwandalyn Reece, the museum's associate director for curatorial affairs, says the history of block parties as an urban phenomenon began in Black neighborhoods as a tool to bring people together.

“That spirit of community, which we all talk about as the roots of hip-hop, really originates in that block party concept,” says Reece, who defines block parties as a “community gathering where people come together to hangout, to talk, to celebrate, and just have fun together.” The Smithsonian Anthology of Hip-Hop and Rap is a first-of-its-kind multimedia collection chronicling the growth of the music and culture from the parks of the Bronx to solidifying a reach that spans the globe.

A cultural expression of solidarity

In the 1960s, New York City’s northern-most borough was recovering from the devastating effects of city planner Robert Moses’ Urban Renewal project, which had condemned and then destroyed a vast swath of neighborhoods to make way for the construction of the Cross-Bronx Expressway. The communities calling the area home experienced almost complete obliteration in 1955 as apartment buildings, homes and businesses were demolished. The vacant lots, abandoned apartment buildings, and mass displacement paved the way for poverty, gang violence, turf wars, drugs and arson.

“Post 1968 and all the advances of the civil rights movement,” says Reece, “but there was still a lot of urban poverty and disenfranchisement in the communities.” The South Bronx had been home to a lot of communities and people of color, Latinx, Caribbean, African Americans, she points out. “So the South Bronx was one of those centers where poverty and disenfranchisement loomed really large, and there was also a proliferation of gangs.”

Chang richly details the turf warfare and gang violence that eventually culminated in the death of the 25-year-old peace counselor, Cornell “Black Benjie” Benjamin. Cornell, a leader of the powerful predominantly Puerto Rican Ghetto Brothers gang, was appointed as the third staff leader to head up what the vice president, Benjy “Yellow Benjy” Melendez, named the South Bronx Defensive Unit. Under the leadership of Benjy, the neighborhood gang was transforming into a community organization that spoke out against the area’s poor healthcare system, and hosted local clothing and food drives. Benjy had a passion for community service, but since his real love was music, he also served as the leader of the Ghetto Brothers’ Latin-rock band. Cornell’s death, a horrific beating as he tried to negotiate a gang truce, was pivotal to a reconciliation and peace treaty that the Ghetto Brothers, negotiated, declaring: “If we are to build up our community to be a better place for our families and ourselves we must work together.”

The Ghetto Brothers band played their Latin-funk in neighborhoods on the streets, tapping into city lampposts to power their amps and issuing invitations to all the gangs to join in, redirecting their frustrations of marginalization by creating music that everyone could groove together to at their Friday block parties.

“Gangs were dissolving. The new kids coming up were obsessed with flash, style, sabor,” he wrote. “For them, the block party—not the political party—was the space of possibility.”

Cheryl Keyes, African American studies department chair at the University of California, Los Angeles, and one of the dozens of historians and musicians working as advisors to the Smithsonian’s hip-hop anthology project, says she wants people to understand that the emergence of the genre in the 1970s was all about unity.

“This was a beautiful time and I hope that people understand with hip-hop, really its main purpose was to bring folks together. And the block party happens to be one of the platforms to do this,” Keyes says.

Keyes recalls that growing up in Baton Rouge, Louisiana, she didn’t experience block parties in her town. Instead, she discovered them in 1986 when she started completing field research on the origins of Black Atlantic music and the verbal traditions of rap music. She learned that these urban gatherings served as outdoor conservatories for rookie DJs to practice their skills and promote new music in a safe space that welcomed all ages.

Keyes, who is the author of the first history of rap music, Rap Music and Street Consciousness, says DJ’s she met during her New York field research also told her that block parties became a strategy for controlling the crowd.

“Some of the mobile DJs, the disc jockeys, would set up their sound systems somewhere where you could hear it blasting bringing the people together. And as the DJs would tell me,” she says: “‘This ain't the club,’ because a lot of the gang violence took place in the club, ‘but we take it on the outdoors. Where everybody can be a part of this celebration of life on this particular hot day.’”

Although the geography of New York City’s 120,000 blocks makes it a prime place for an impromptu street party, these sorts of social events can be seen across America in urban cities like Denver, Philadelphia, Detroit, Chicago, Atlanta and Los Angeles.

The age-old Black tradition of meeting outdoors for fun, fellowship, food and music is a rooted in history of the Great Migration. Between the 1910s and 1970s, an estimated six million African Americans left the racial violence of the Jim Crow south, traveling to northern, midwestern, and western states in search of better educational and employment opportunities for their families.

As Black soldiers returned from World War I, they also settled in Northern urban environments. Fath Ruffins, a curator of African American history and culture at the Smithsonian’s National Museum of American History, says this launched the renaissance of a new Black working class culture.

“This is the era in which jazz is becoming a national and international music. This is the era in which a lot of Black firsts are being made, new Black newspapers are being established,” Ruffins says. “In urban areas, particularly where Black people could control, or could dominate segments…it’s in that context that you begin to have rent parties and block parties, because you have to have some density in the block to have a block party.”

In the early 20th century, block and neighborhood parties, usually informal and free to attend, may have been hosted by the local church. Sometimes goods and treats were sold to raise funds for community initiatives. In the 1950s before the wide availability of recorded tracks, a street party was a place to hear live musical performances.

According to Ruffins, as Black populations increased in cities the social events became more structured, with municipalities sometimes requiring a city permit.

A new age of street parties

“Of course, today there are still block parties,” says Ruffins, pointing to the small gatherings that connect neighbors from one city block or another. “But you also have these larger festivals going on and, this hip-hop party that NMAAHC is throwing is very consciously referring to the kind of block parties of the 90s, and 80s because early hip-hop music is a lot based on neighborhood,” she says. “DJs and groups, it's almost analogous to the rock band in the garage. There are a lot of young rappers, and DJs, and dancers who move out of the parties at night that they're having into these kind of block parties.”

Holler has spent nearly two decades hosting parties across the U.S. in places like, Chicago, Los Angeles, Philadelphia, Atlanta, Washington, D.C. and Cleveland. His years of music experience in the party planning and promoting field have included a recent event at The Universal Hip Hop Museum in New York set to fully open in 2024. “I think that this summer I've seen more block parties than I've ever seen…I mean, there's a ton. Every time I look on social media, I see footage from some outdoor event, be it in a park or on the block or something like that,” he says.

“A true distilled spontaneity is just arriving in a park with speakers and pushing play on your music and seeing what happens. I don't know if that happens anymore,” Holler says, but he points out that today’s spontaneous gatherings are made easier with the rise of social media and much more desirable after the confines of the pandemic.

However, the original message and community sense of what he describes as the “purest form of gathering socially with music” remains. “I mean, things are changing, but the spirit of the block party is still the same. Like there's food, there's music, there's family.” 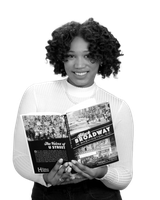 Briana A. Thomas is a Washington, D.C.-based historian, journalist and tour guide who specializes in African American research. She is the author of the Black history book, Black Broadway in Washington, D.C.