The autogiro finds new fans a century after its first liftoff 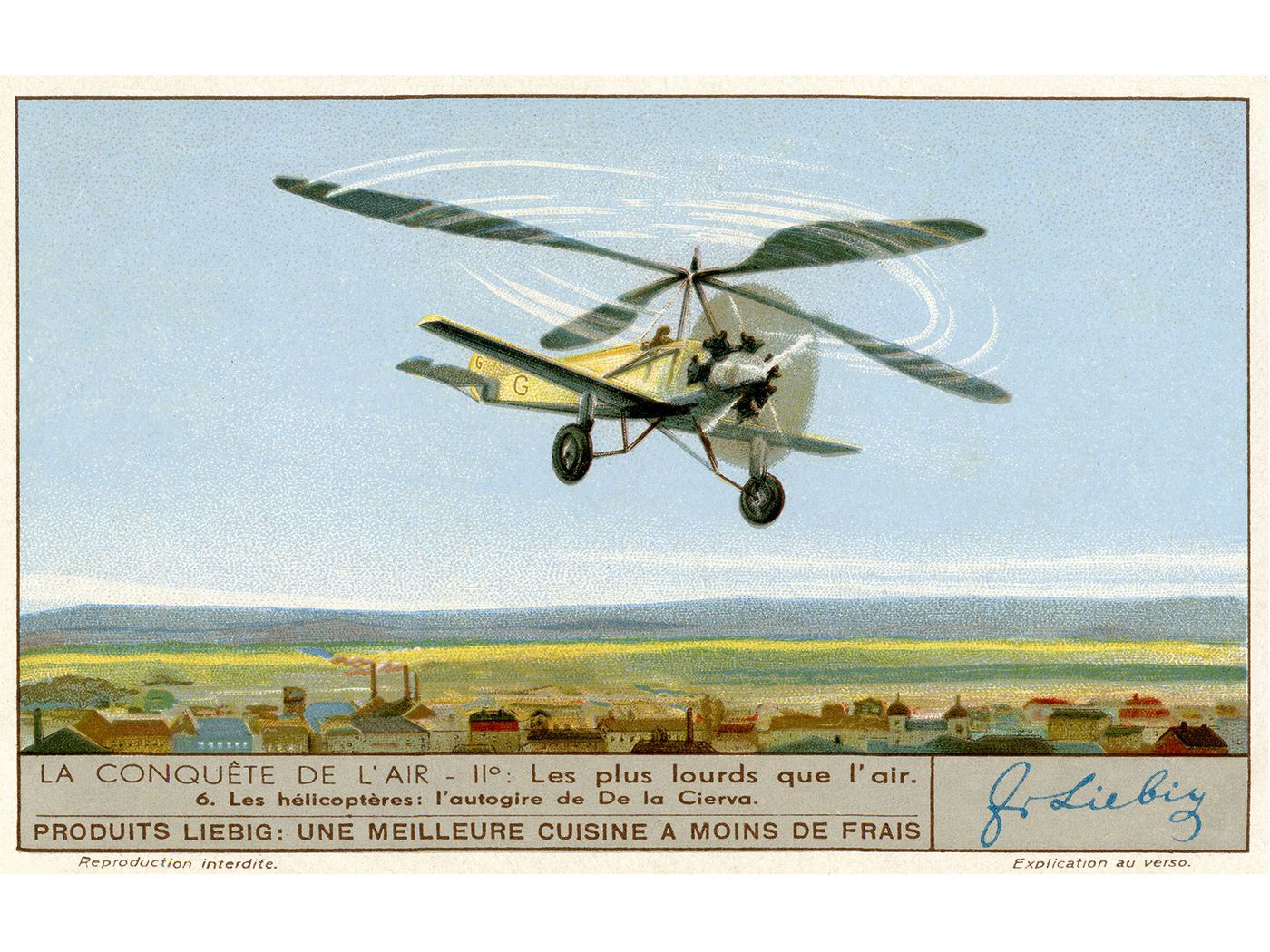 One hundred years ago this month, Spanish aeronautic engineer Juan de la Cierva became the first person to fly an autogiro—a colorful but somewhat creaky limb on the helicopter’s family tree. De la Cierva created the rotor-driven aircraft to provide added safety to fliers after one of his airplanes crashed; however, its ability to take off and land without a long runway became its most notable feature.

The autogiro had a typical propeller for forward flight as well as an un-powered rotor blade to provide lift. Wind drove it in much the same way that windmills work. “The old story is that Cierva came up with the idea because he was watching Don Quixote on the stage, and the windmill going around, and that, and being from Spain, was what caught his attention,” says curator Roger Connor of the Smithsonian’s National Air and Space Museum.

Like Quixote, de la Cierva had a dream, and in his case, the windmill brought it to life. “‘Autorotation’ is the keyword for what happens to make the thing work, and autorotation is essentially what’s occurring with a windmill,” Connor says.

The initial autogiro required a horse or a working group of several people to wrap a rope around the rotor, generating a spin and unpowered lift. Sometimes, the aircraft would have to be taxied for a while before it developed enough speed to lift off the ground. For these reasons, it took several years for de la Cierva’s idea to become commercially viable.

Five years after de la Cierva’s January 9, 1923, flight, American aircraft engineer and manufacturer Harold Pitcairn imported one of de la Cierva’s C.8W Autogiros to use as an experimental laboratory for more advanced aircraft. On December 18, 1928, it flew above the United States for the first time. Pitcairn acquired patent rights to many of de la Cierva’s innovations and made a 1,000-mile round-trip journey in May 1929, drawing crowds wherever he stopped as his travels carried him from Philadelphia to Baltimore, Washington and Richmond.

But it would be three years before the autogiro would have its most historic moment. By then Pitcairn had enjoyed some success in the selling his craft, and in 1931 his first sales model landed on the White House lawn, becoming the first aircraft to do so. That year, a pilot also flew Pitcairn’s C.8W to the National Mall, landing it in front of the Smithsonian Castle, as a donation to the museum. That craft still resides within the Smithsonian’s collections, though it is not on view, because in those early years it was stored improperly without temperature or humidity protections and some of engine hardware was used in 1976 to make another plane ready to go on display. Nevertheless, Connor says the historic relic is probably the best of de la Cierva’s early planes surviving today, while its restoration remains “on the docket.”

Pitcairn, who had spent years studying de la Cierva’s craft, overcame some of the original autogiro’s weaknesses. He equipped the craft with a two-person passenger compartment and replaced the horse with a mechanical starter driven by the engine.

A 1931 British Pathé short film, available on YouTube, explains the workings of an autogiro, showing how an engine starter generates initial power to the plane’s rotors to create the necessary speed for lift, after which the rotors move automatically. “The inventor Juan de la Cierva,” explains the narrator, “discovered that blades of specific design, correctly set and hinged to their central hub, would, under the force of gravity, acting through the weight of the ship, rotate continuously and unfailingly as long as the plane is in the air.” (The film also offers a surprising view of an autogiro on a horse show field, jumping obstacles intended for horseback riders.)

Despite Pitcairn’s innovations, his autogiro was not always easy to sell. It cost five times as much as an airplane with similar capacity and was generally slower. Furthermore, despite its stall-proof design, it experienced difficulties such as vulnerability to crosswinds, causing trouble for pilots.

Amelia Earhart, who set an autogiro altitude record in 1931, was among those who encountered disconcerting problems on multiple occasions. It was “very difficult not to bang these things up,” in Connor’s words, and the craft’s shortcomings quickly overshadowed its advantages.

Two years after the autogiro’s 1931 triumphs, its commercial market collapsed. The Great Depression combined with the craft’s cost transformed it into a vehicle that served mostly as a plaything for the wealthy few.

Pitcairn was among participants in a Department of Commerce competition to build an aerial Model-T, an aircraft that would be affordable for individual purchasers. His autogiro, the AC-35, one of which is also held in the museum’s collections and on view at the Udvar-Hazy Center in Chantilly, Virginia, allowed the pilot to land and then fold the rotors and drive it home as if it were a car. Unfortunately, again its purchase price was too high at $12,500—nearly eight times the 1936 average family income. The prototype worked well, but no others were built.

The U.S. government showed some interest in autogiros as a means of delivering mail or crop dusting, but the idea remained handicapped by the issue of reliability. Among the relatively few commercial buyers of Pitcairn’s craft were marketers seeking to use it as a sales tool. “Companies would put a siren on it and tow a banner behind it,” and the opportunity to see this unconventional vehicle could “empty a school or factory,” says Connor. “Everybody would come rushing out to see what it was that was coming overhead.” While it may have failed as a commercial aircraft, it was “very effective at getting attention. It was that exoticism that was really kind of selling the idea of the autogiro. … From a social standpoint, that was kind of how the autogiro was constructed.”

Ironically, de la Cierva, who pushed for production of autogiros for safety reasons, died in a plane crash in 1936. Until his death, the autogiro pioneer remained outspokenly opposed to development of helicopters, which he believed would be too dangerous.

Connor says helicopters are much more complicated aircraft that require far more maintenance, but autogiros were not effective enough to fill the appetite for vertical vehicles in air transportation: Helicopters ultimately sated that hunger.

In 1938, Congress approved legislation intended to rescue the autogiro industry. However, in the end, the military used that money to build helicopters, Connor says. When Igor Sikorsky created the first mass-produced helicopter in 1942, it quickly made the autogiro seem more like a relic than a vehicle of the future. From a practical perspective, the helicopter, which could hover anywhere, filled a need, while the autogiro, which could only hover when confronted with a strong headwind, became an oddity without a clear purpose.

The autogiro found new life in the 1950s, again with a less-than-practical purpose in mind. At that time, Connor says, people like the Russian American engineer Igor Bensen discovered ways to modify the design to a very basic two-bladed rotor, a very simple mechanism. “Now you have something that could be built in your garage on a shoestring budget,” says Connor. “And in fact, when Benson markets his gyroplanes, which he calls gyrocopters, or gyrogliders, he markets them mainly to teenage boys. So the idea was that you could send off, with a couple hundred bucks, you could get setup plans and some key parts, and then build the rest yourself, and then you’d have something that you could tow behind your car, essentially. And you didn’t need a license for that … it was basically a kite.”

The museum also houses several pieces of Bensen’s work. Ultimately, motorboat engines or even a chainsaw motor could be used to make these mechanisms work.

“So that kicked off the gyroplane sport in aviation, which persists to this day,” says Connor. “It still embodies that eccentric counterculture aspect that was there even in the 1930s. These days it’s less the rich eccentrics that have them, and more just the kind of people that want something that’s really kind of off the beaten path.”

The National Air and Space Museum’s webcast “STEM in 30” debuts Thursday, January 12, with an episode focusing on the craft. On January 13 and 14 at 10 a.m., the museum’s “Flights of Fancy Story Time” spotlights Yellow Copter by Kersten Hamilton. Also on January 14, “Air and Space Adventures,” the museum’s monthly virtual game using the app GooseChase, examines autogiros, helicopters and other vertical flight at 12:30 p.m.