Leonard W. Miller, the founder of Black American Racers Inc. (BAR), says he feels like the other half of Hidden Figures, the Oscar-nominated film about the unsung African-American heroes of the space race. He was speaking during a recent donation ceremony, honoring the arrival of artifacts from the group to the Smithsonian’s National Museum of American History in Washington, D.C.

The donation consisted of ephemera used during the team’s early history, beginning in the early 1970s and ending in 2006. From Miller’s racing awards and trophies to a vibrant, yellow jacket and other memorabilia, the collection holds items that offer an exclusive look at the turbulent and sometimes dangerous path these racers pioneered.

Miller formed the association in 1973 to develop a team of black drivers and engineers to compete in major national and international automotive races. As the first black professional team to receive the backing of a national sponsor and to compete in England, BAR would go on to rank in the top 60 teams worldwide during the mid-1970s. Miller would be inducted into the Black Athletes Hall of Fame in New York City in 1976.

Miller and several former members of BAR, including his wife and son, preside over a display table holding several of the artifacts in the museum’s reception hall. As Miller’s gaze falls on each item, a new story bubbles up.

Growing up in the Main Line of suburban Philadelphia, where his mother worked as a head housekeeper and a cook, Miller would listen to the neighborhood conversations about cars. He likes to say that he learned a lot about racing “through osmosis.”

“Living on those estates when I was real young, they talked about race cars and race horses,” Miller says. “All of these rich, white families had all these rare cars that were beautiful and sounded good. So, I said that was for me. And that’s what started me off to a lifetime of races.”

Jane Rogers, one of the curators in the museum's culture and the arts division and who specializes in sports, says the collection tells an important but little-known story about breaking down barriers.

“I think [audiences] will be definitely surprised that there was an organization for black racers and that it was successful,” Rogers says.

As Miller continues peering over the table, he stares at a picture of himself with BAR driver Tommy Thompson. A small, black steering wheel rests next to the photo. The picture of the two was taken two weeks before the fatal 1978 racing accident in Trenton, New Jersey, that killed Thompson—a reminder of the sport's inherent danger.

“We did lose a driver and that had a very horrific impact on me,” says Rose Miller, Leonard W. Miller’s wife. “At one point, I stopped going to races because I did not want to see the accidents.”

Throughout their time with BAR, Miller and his growing family experienced their fair share of obstacles. They felt pressures from the black community not to engage in what was thought of as a “white man’s sport,” Miller says, and they had to repeatedly work to solidify sponsors so they could compete. After going through several iterations and name changes, it was this lack of sponsorship that would lead to BAR’s end in 2006.

“At times, it became a little frustrating because of the negativity that affected getting sponsorship and just being known as black auto racers for my husband and my son,” Mrs. Miller says.

But even so, the Millers pressed on.

“[Over] the last ten years, we did write two books,” says Leonard T. Miller, Miller’s son and a former BAR member himself. “My father wrote the book Silent Thunder that was published in 2004. I wrote the book Racing While Black, published in 2010. That was our effort to get the word out about our accomplishments. But we never dreamed a museum would be interested.”

The Millers plan to release a documentary titled Silent Thunder, based on Miller’s book, as a continuation of their efforts to inform people about the existence and success of black racers. The film will feature archival footage from five different racetracks. 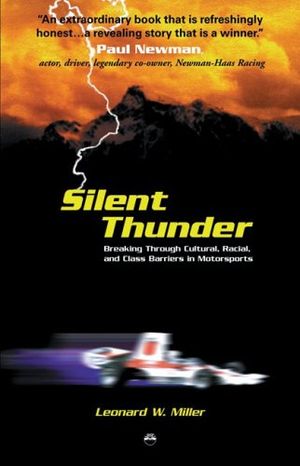 From inside the pits where resourcefulness defines victory or defeat, to behind the wheel with nothing but the smell of adrenaline and fear, to the plush upholstered offices of corporate sponsors where truth can be treacherous, Silent Thunder is an engrossing read that moves at lightening speed.

Back in the reception hall, Leonard watches as his father moves on to tell new guests about another artifact, gesturing broadly towards a small, yellow card marking Miller’s entrance into Formula One racing in Europe. Miller says it’s the one thing that stands out the most to him.

“There are a lot of trials and tribulations throughout auto racing,” Leonard T. remarks. “The recognition of the Smithsonian collecting these artifacts gives us even more motivation to move forward and still try to get the word out to accomplish something in auto racing.” 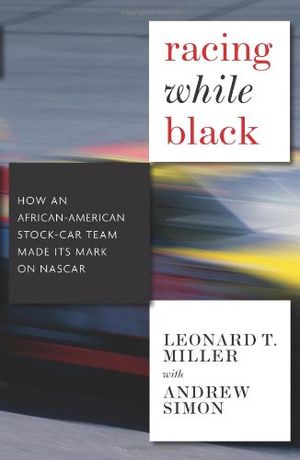 Racing While Black: How an African-American Stock Car Team Made Its Mark on NASCAR

Jesse Sparks is a Chicago-based journalist. He has worked with The New York Times, The Houston Chronicle and the Chicago Sun-Times.