How the First Sports Bra Got Its Stabilizing Start 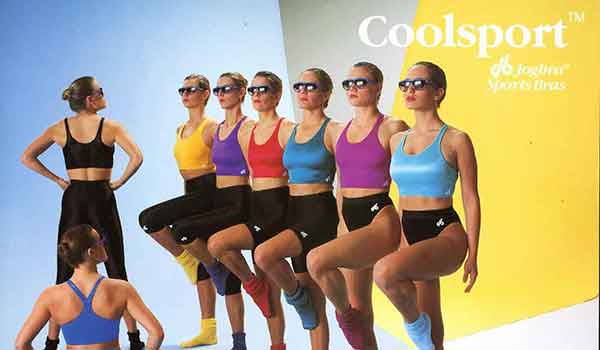 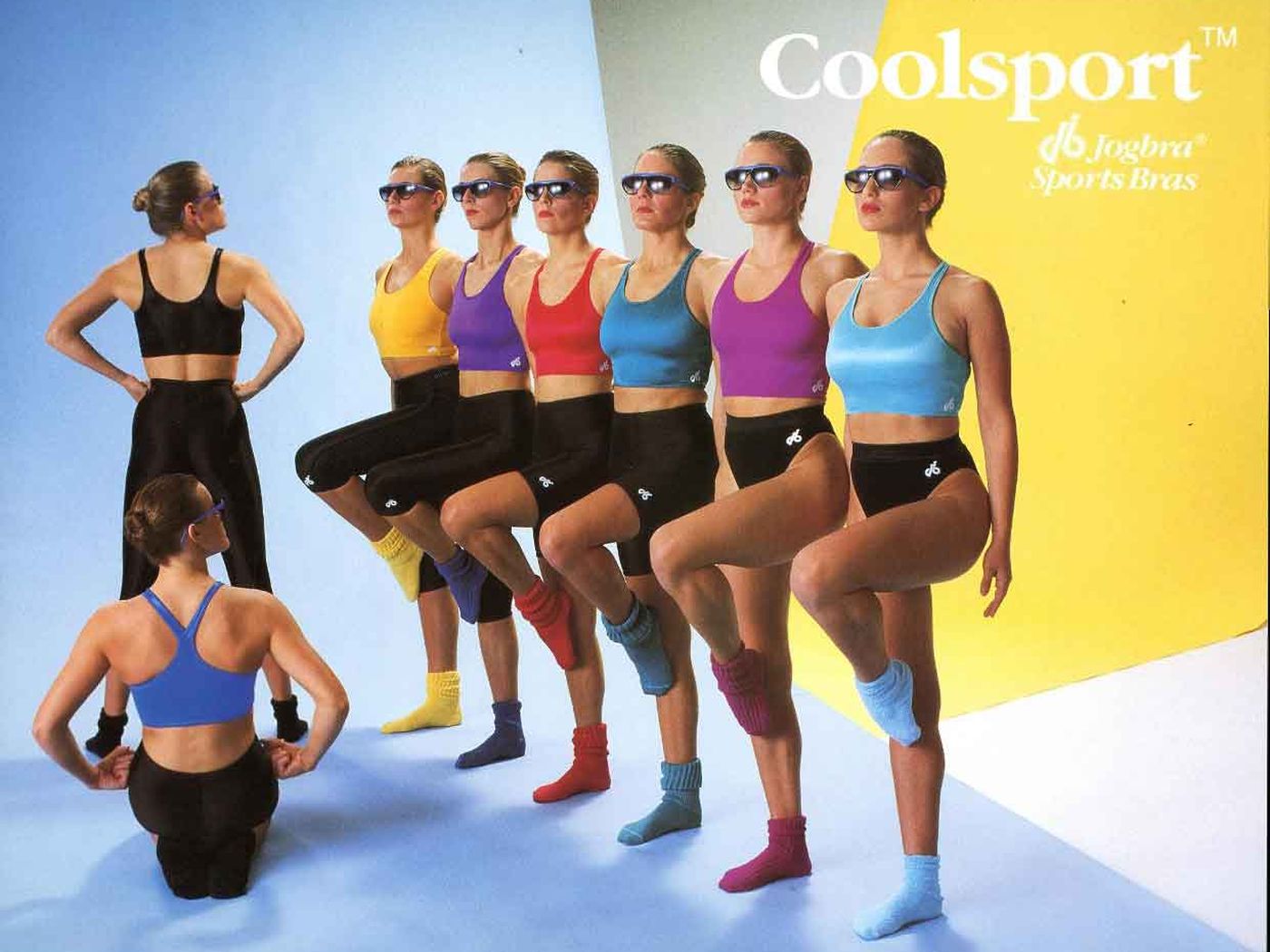 Documents from the Smithsonian's "Jogbra, Inc. Collection" include the company's marketing and advertising materials (above). Archives Center, NMAH

It was 1977, and Hinda Miller, Lisa Lindahl and Polly Smith were doubled over with raucous laughter. They say their very clothing was in jeopardy.

“We were literally peeing in our pants we were laughing so hard,” chuckles Lindahl. The object of their amusement? Lindahl’s then-husband and his shenanigans with his jock strap.

“He put his jock strap on upside down across his chest, and put it on like a one cup bra,” Smith remembers as the others giggle in the background, “and all of a sudden we looked at him and thought, ‘Hmmm.’”

The three told CBS News Radio that they had spent the summer going to a plethora of stores trying on bras. They were looking for comfort in the midst of the jogging craze that struck the nation after the release of incredibly popular book, The Complete Book of Running. If one looks at ads for bras in 1977, one can see there isn’t a lot of construction that would keep a woman’s breasts from bouncing painfully while running. But the jock strap looked like it could work, especially after Lindahl took it from her husband, pulled it over her own head, and pulled the pouch down over her own breast so that it worked like the cup of a brassiere.

“It made sense to me because I said, ‘Oh, that’s something you climb into,’” Smith remembers, seeing through the eyes of the costume designer she was. “It will stretch, it eliminates all the hooks, and it is nice, soft elastic. So, after that, I was on board.”

Miller, who was also a costume designer, says the whole situation was really funny because they knew nothing about bras. “We had no limitations. We didn’t know you couldn’t sew jock straps together because in costume design, creativity is the highest value and you do things out of the box. And as everyone said, that was out of the box,” says Miller.

The whole project got started because Lindahl and her sister, Victoria Woodrow, were among the many women who took up running (they called it jogging then) in the 1970s, and their brassieres were falling down on the job.

“It was a joke during a phone call with my sister, who said, ‘What do you wear when you’re running to make you comfortable and make your breasts not bounce uncomfortably?’” Lindahl recalls. “She said,’ Why isn’t there a jock strap for women? Ha Ha Ha!’ We both laughed . . . and it’s the same idea for a different part of the anatomy.”

Lindahl says she wasn’t a jock herself, nor was she athletic. But she started running to loose weight in an era where Charlie’s Angels was on television, and women wanted to look like the stars of the show.

“And I kept running because it became really my first spiritual practice. It made me feel good. It made me feel empowered, and I came up with the idea for the bra to solve my own personal problem,” Lindahl says. “And then I thought, If I want this, I bet other women do too.”

But first, they needed to come up with a prototype, and the fabric used to make jock straps was not quite right. The garment needed a firmer fabric and a much firmer elastic. So, Smith went to New York City, bought sample yardage, and made a prototype for Lindahl to try out. Lindahl went running, and Miller ran backwards in front of her, to see if the bra worked.

“I’m going, ‘Oh no that’s really going to inhibit my run,’” Lindahl says, laughing. But she says not only did it work, it felt great. “I thought, ‘This really makes a difference.’ . . . And Hinda said, “It looks like your breasts aren’t moving so much.’ And we knew we had a winner!”

Miller adds that the run taught them a lot. For one thing, she says, you can’t stop the breasts from moving. You can only minimize that. “What we figured out that everyone does now, is we pulled the breasts closer to the central line of gravity,” she says, referring to the plethora of products that followed their lead. “When the breasts go up and down without any support, the Cooper’s ligaments stretch, and that’s not good if you want to breastfeed your baby, or all of us are quite vain and we don’t want things to hang. So, we supported the breast by pulling the breast close to the chest wall.”

Smith gave the prototype to Lindahl and went to New York City to mount an off-Broadway play. Miller went to South Carolina to teach costume design. Lindahl formed a corporation and issued shares to the three of them, then sent the garment to Miller. At that time, they were calling it the Jock Bra. Miller showed it to the owner of a small franchise called Phidippides, where the owner’s daughter ran a 5K and offered some suggestions for alterations. Miller hired an unemployed sewing supervisor named Carolyn Morris, who worked out the sizing for what all of the women felt was an athletic garment. But in South Carolina, women didn’t like being called jocks.

“So, I called Lisa, and she said, ‘Well what about Jogbra?’ and that’s how the name came about,” Miller says, adding that her father loaned then $5,000 to get everything started. “Carolyn made 60 dozen bras. I sent half to Lisa, half to myself, and we sold them in these small running stores . . . and that’s how we started our first sales history!”

But there was a lot to learn about the marketing process, even though the Jogbra was so popular they made a profit in their very first year. They say they don’t remember how much. By 1979, they went to their first sporting goods show in Chicago. They had a small booth, and a blow-up photo of a Playboy Bunny wearing the bra. It cost $4 to make, $8 wholesale and $16 retail. Lindahl remembers that there was a line of customers ready to buy it, and a line of sales representatives who wanted to work with them. At the time, she says, they didn’t even know what a ‘rep’ was.

“I came in from a run one day and my phone was ringing. I answered it and a man said, ‘Y’all looking for reps?’ I went, ‘What’s a rep?’” Lindahl laughs. “There’s this long pause and this lovely gentleman said, ‘Y’all new to the sporting goods industry?’ And I said, ‘Yeah.’”

Lindahl says he spent an hour and a half on the phone with her, explaining how the industry worked, what a trade show was, and what they should and should not do. She hired him on the spot, and the company did so well they sold it 12 years later to Playtex Apparel. They won’t say for how much. Other sales followed, the brand got subsumed by Champion Sportswear and the rest is history.

The "Jogbra Inc. Records," including biographical materials, business records, photographs, patent records and early advertising and marketing materials, is held in the Archives Center of the Smithsonian’s National Museum of American History. The three women just did a panel discussion sponsored by the museum’s Lemelson Center for the Study of Invention and Innovation, and they have been inducted this year into the National Inventors Hall of Fame. They will also be featured in the museum’s upcoming exhibition “Picturing Women Inventors.”

But all these years later, with women everywhere sporting Jogbras, Polly Smith has to smile at the fact that she created the very first prototype.

“When I’m in the gym,” Smith says, “and these women are strutting around in it and I’m like, laughing to myself.”

The exhibition “Picturing Women Inventors,” sponsored by the Lemelson Center, on view indefinitely at the Smithsonian’s National Museum of American History in Washington, D.C.