The story of how Mary Poppins was made is generating much critical and popular buzz in the new film Saving Mr. Banks. The release comes on the eve of the movie's 50th anniversary next year and the Library of Congress has just announced that Mary Poppins is one of 25 legendary films being added this year to the National Film Registry, a pantheon of films that have cultural, historic, and aesthetic significance and “help define a national patrimony.”

The new movie proclaims it is “based on a true story,” a cheery phrase that cleverly balances truth-telling and let’s-pretend. Saving Mr. Banks is not a documentary, but a highly-entertaining feature film loosely based on the deeply antagonistic collaboration between two very strong-willed artists.

The cast is formidable, starring Emma Thompson as Mary Poppins’ fictional creator P.L. Travers, and Tom Hanks as media mogul Walt Disney. Much of the movie takes place in the rehearsal hall at Disney Studios, and historical documentation for the screenplay was abundant: Mrs. Travers (as she always insisted on being called) demanded that all meetings with the creative team be taped; the Disney Archives also provided Mr. Hanks with a treasure trove of primary material to study as he created his concept of the Disney persona.

But the core of Saving Mr. Banks, and one that relies less strictly on the historical record, is the backstory of how art, ownership, and commerce somehow combine to produce box office success. This is an essentially Disney story, and as such, it’s all about the Mouse.

In the early 1940s, when Walt Disney’s daughters fell in love with the book Mary Poppins, Disney promised them he would adapt the enchanting story into a movie. And of course Walt Disney expected that, because he was Walt Disney, the project would happen in a spit-spot snap. It didn’t. For the next 20 years, Disney tried unsuccessfully to persuade the book’s prickly author, P.L. Travers, to sell him screen rights. Finally in 1961 he managed to lure the intransigent author to Hollywood.

By then, Travers’ Mary Poppins royalties had dwindled and she needed money, so she agreed to spend two weeks working with Disney’s creative team. She fully intended to sabotage the film, though, because she was aghast at the idea of her Mary Poppins being sentimentalized by the "Disney treatment.”

Saving Mr. Banks unfolds in scenes that alternate between Mrs. Travers in storyboard meetings and flashbacks of her hard-scrabble childhood in Australia. As the movie develops, Travers’ traumatic childhood becomes central. Born as Helen Goff, she adored her banker father Travers Goff, a charmer who filled her life with love and story-telling even as he fell into an alcoholic abyss. After her despondent mother attempts suicide, her aunt arrives to take charge of the fractured household. The aunt becomes a physical model for Mary Poppins, replete with a giant carpetbag filled with amazing stuff and an umbrella with a parrot-head handle. Her purpose is to make everything better, and she does except for one impossible hurdle. She cannot save the father.

Emma Thompson captures the flinty Mrs. Travers brilliantly, from her tightly-curled hair to the “No No No” mantra she barks endlessly at the Disney creative team. In a recent interview in More, Thompson talked about how “it was wonderful to play this relationship between two people who’ve been very damaged as children and yet responded to that damage differently. Walt expressed it with a kind of huge, sometimes misplaced optimism and faith in human nature. (Travers believed) that there is great darkness in life and if you want to really serve children, you include the darkness.” Helen Goff never married, and took her father’s name Travers as she invented herself as a children’s books author. 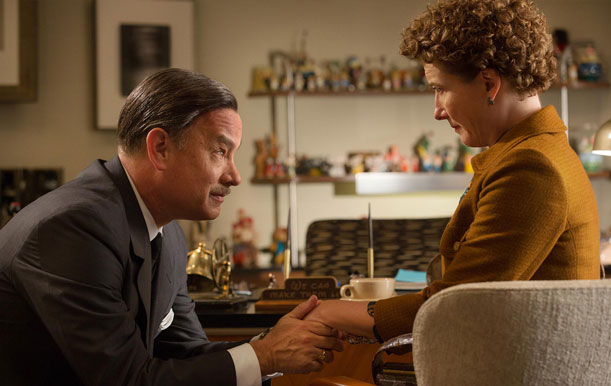 Tom Hanks’ Disney is folksy but shrewd, and clearly baffled by his inability to win over Mrs. Travers. (Courtesy of Disney)

Tom Hanks is a thoroughly likable Walt Disney, portraying the studio head at his media height. In 1961, Disneyland is such a success that Disney World is being planned, and the studio is in full-flight with mega-popular movies and television programs. Walt Disney was part of America’s family: when I was growing up, my family gathered around the television every Sunday night to watch "Walt Disney’s Wonderful World of Color." I felt like I knew Uncle Walt.

Hanks’ Disney is folksy but shrewd, and clearly baffled by his inability to win over Mrs. Travers.In addition to ensconcing her at the Beverly Hills Hotel and providing her with a chauffeured limousine (driven by the engaging Paul Giamatti), he tops the sundae with a personal tour of Disneyland, and gets her to ride his wife’s favorite horse “Jingles” on the carousel. What more could anyone ask of life?!

But Mrs. Travers is adamant, refusing even to call him “Walt.” The backstage scenes in the rehearsal room at Disney Studios are terrifically revealing, showcasing how the songwriting Sherman brothers—Richard and Robert—chisel away Mrs. Travers’ objections to the movie being a musical. The Shermans snag phrases from the book to create such songs as “Spoonful of Sugar” and “Feed the Birds,” but “Supercalifragilisticexpialidocious” is a tougher sell. In a recent interview with the New York Times, surviving brother Richard said “She didn’t care about our feelings, how she chopped us apart.” He also noted how strongly Disney disliked negativity: “If you can’t think of something to improve it, then keep your mouth shut.” 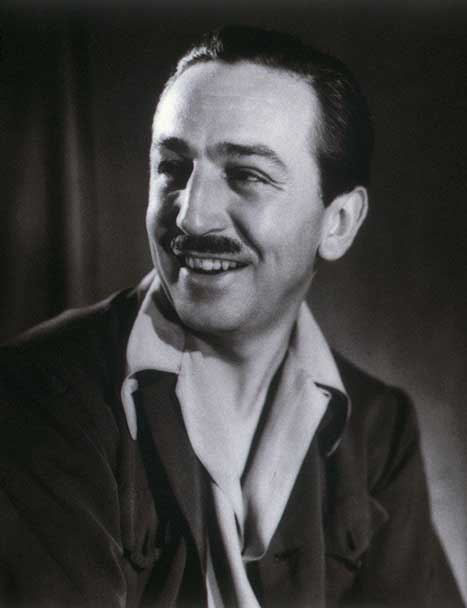 Walt Disney in 1940 by an unidentified artist. (Courtesy of the National Portrait Gallery, Smithsonian Institution)

The film logically ends with a heart-warming finish as we see what finally convinces Travers to sign the movie rights to Disney, but its a scenario schemed out of the blue by screenwriters Kelly Marcel and Sue Smith. There is no hint among the volatile tapes or Disney Archives material, nor in any of Mrs. Travers interviews, that the scene has a single grain of sugar-coated truth. What is true is that Mrs. Travers’ artful Mary translated into commercial success for her: she was paid $100,000 ($750,000 in 2013 money) and received five percent of the movie’s gross earnings. She never embraced the depiction of her Mary on the big screen, however, and refused to work for Disney ever again.

At the end of the movie after the final credits, an excerpt from the original rehearsal hall tapes rolls, allowing audiences to hear the real Mrs. Travers vociferously bleating “No No No.” It’s a purely Hollywood attempt to give this bio-pic a boffo factual finish, but P.L. Travers’ voice makes one ask how this sourpuss could have created the joyful movie musical Mary Poppins. The answer is that she didn’t—Disney did.

Mary Poppins would be the greatest live action success of Walt Disney’s career. It won five Oscars, including two—Best Song (“Chim Chim Cher-ee”) and Best Music, Original Score—for the Sherman brothers, whose music makes the entire production soar. It looks like Saving Mr. Banks will be an award favorite as well. Emma Thompson has just been nominated for a Best Actress Golden Globe, and the season is just beginning. 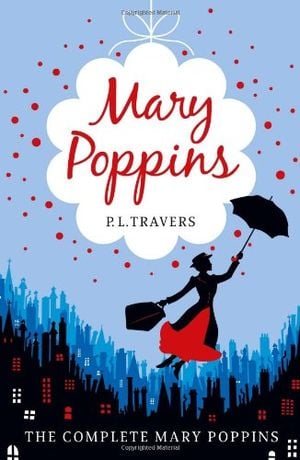 Mary Poppins, She Wrote: The Life of P. L. Travers