How the Camera Introduced Americans to Their Heroines 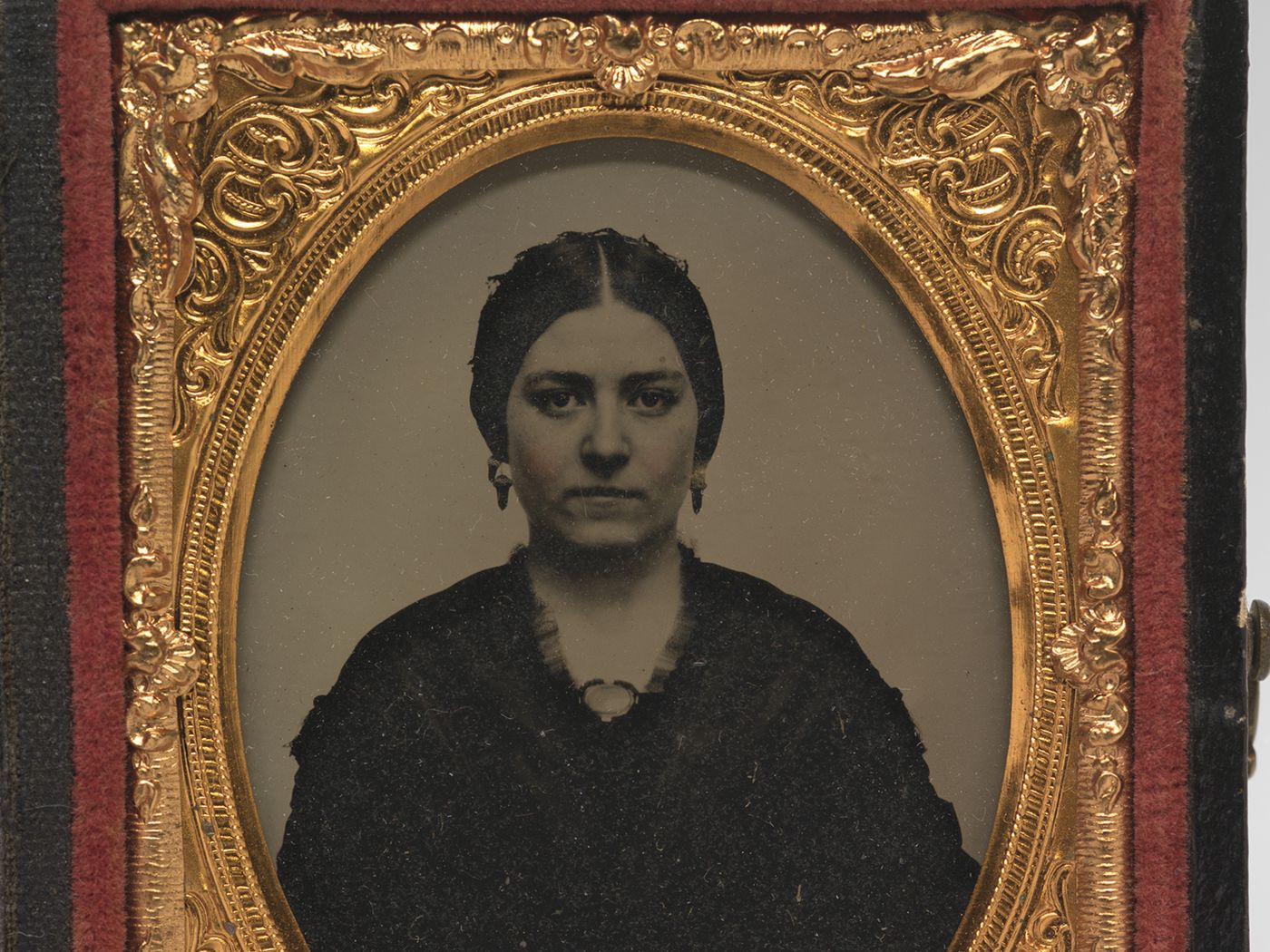 Prior to the advent of photography, the main method of preserving one’s likeness was posing for a painting or sculpture—a decidedly expensive process accessible only to those in the upper echelons of society. But with Louis-Jacques-Mandé Daguerre’s 1839 invention of the daguerreotype and subsequent advances in photographic technology, portraiture became increasingly democratized, enabling those with limited resources to acquire what theorist Roland Barthes once described as an “irrefutable assertion” of one’s own existence.

Compared with inherently interpretive mediums such as painting and sculpture, the camera appears to offer unparalleled objectivity. As Susan Sontag wrote in the seminal text On Photography, “Photographed images do not seem to be statements about the world so much as pieces of it, miniatures of reality that anyone can make or acquire.” Indeed, photography’s claim to authenticity was one of the main attractions of early portraiture; rather than relying on a subjective artist to capture the intricacies of one’s appearance, subjects simply trusted the camera to produce a direct reflection of reality.

This trust, in most instances, was well-earned. Still, the camera remained more susceptible to manipulation than one might initially believe: Ann Shumard, senior curator of photographs at the Smithsonian's National Portrait Gallery, explains that pictures are “always telling the story that the photographer wants to tell.” Even in the medium’s early days, she adds, daguerreotypists could “pose … sitters in such a way that they’re shown to their best advantage.”

Regardless of the medium’s debatable claim to objectivity, 19th-century snapshots serve as a valuable portal for peering into the past, offering a lifelike and arguably more accurate depiction of subjects than paintings and sculptures. The 12 photographs now on view in the exhibition, “Women of Progress: Early Camera Portraits,” at the National Portrait Gallery attest to one of the camera’s greatest strengths: lending visibility to women and other underrepresented groups at a crucial point in the ongoing struggle for equal rights.

In the United States, the rise of studio portrait photography during the 1840s and ‘50s coincided with a period of heightened visibility for women, who were emerging as prominent players in arenas including activism, literature, journalism and theater. Harriet Beecher Stowe’s Uncle Tom’s Cabin, for example, sold 300,000 copies across the nation in the first year following its publication, while in 1855, comedic stage actress Laura Keene became the first female manager of a major New York City theater. These women, as well as others making their mark in antebellum America, increasingly found themselves in front of the camera, posing for portraits to be shared with the public or exchanged among loved ones as tokens of affection.

“Women of Progress” catalogues the stories of 13 such mid-19th century figures through the lens of ten daguerreotypes and two ambrotypes. Some of these individuals remain household names today—Beecher Stowe, Lucretia Mott and Dorothea Dix, for example. Others, including Mary Ann Brown Patten, the first woman to sail a clipper ship around Cape Horn; Charlotte Cushman, a popular actress who played both male and female parts; and Mary Ann Meade, a daguerreotypist in her own right—are lesser known. Regardless, the women are united by both their progressive bent and the fact that their camera likenesses survive as a direct result of the burgeoning popularity of photography.

An 1846 photograph of journalist Margaret Fuller falls into the first of these categories: In a letter to her brother, the writer explains that photographer John Plumbe Jr. asked her to pose for a portrait. The resulting image, a sixth-plate daguerreotype, depicts its sitter reading a hefty tome, seemingly so engrossed in the text that she remains unaware of the camera’s presence. The image was later displayed in Plumbe’s studio to attract future clientele.

The circumstances surrounding the production of an 1851 half-plate daguerreotype of abolitionist and women’s rights advocate Lucretia Mott are far hazier. Taken by photographer Marcus Aurelius Root, the portrait served as the basis for a widely circulated lithographic print by Boston-based artist Leopold Grozelier. Unlike daguerreotypes, lithographic prints could be produced in multiple copies. Lithographs also conveyed a greater variety of tones than earlier printing methods, allowing for more accurate copies of original works such as daguerreotypes and paintings.

Shumard says it’s possible Root’s photograph was taken with the direct intention of serving as the basis for Grozelier’s print. Whereas a daguerreotype sitting typically produced just one plate, lithographs could be easily mass-produced for public purchase.

The majority of photographs featured in the show are daguerreotypes, or silver-coated copper plates treated with iodine and bromine vapor to make them light sensitive. Early daguerreotypists captured images on these plates by posing subjects in front of a camera, making the exposure, developing with mercury vapor, and, finally, stabilizing or fixing by immersing in a special solution. (Ambrotypes, comparatively, are underexposed photographic negatives on glass that appear positive when viewed against a dark background.) Although sitting for a studio portrait was a relatively lengthy process, the amount of effort required paled in comparison to posing for a painting or sculpture.

In addition to saving subjects’ time, daguerreotypes offered affordability and accuracy. As Shumard explains, portraits could be purchased in a variety of sizes, from petite sixteenth-plates to full-size ones measuring around 6.5 by 8.5 inches. Prices rose in accordance with size, beginning as low as 50 cents and reaching a premium of roughly $15. The most popular option—a sixth plate that measured 2.75 by 3.25 inches—cost between $3 to $3.50 at a time when a family’s weekly rent was likely upwards of $5.

“It’s not as though they’re giving these daguerreotypes away,” Shumard says, “but it’s so much cheaper than having a painted likeness made.”

The images on view were produced for a wide range of purposes. “Sometimes we know specifically why,” the curator notes, but with “others, we just have to make an assumption.”

To make copies of daguerreotypes, photographers placed original plates on specialized copy stands and then reshot the image—a process known as redaguerreotyping. Although these copies often lacked the level of contrast and subtle gradation seen in the original daguerreotypes, they were more accurate than lithographs and could be circulated on a smaller scale. “Women in Progress” features two copies—an 1852 picture of Beecher Stowe and a half-plate depicting sisters Mary and Emily Catherine Edmonson in a group photograph taken at an 1850 gathering of abolitionists protesting the impending passage of the new federal Fugitive Slave Law. The Edmonsons earned their freedom from slavery with the help of the Uncle Tom’s Cabin author’s brother, Henry Ward Beecher.

Shumard notes that the group portrait had previously been exhibited in relation to two of its better-known sitters, abolitionists Frederick Douglass and Gerrit Smith. Now, however, the scene’s female subjects are the ones commanding visitors’ attention. “In this instance,” she says, “it’s really nice to be able to highlight the Edmonson sisters.” The Beecher Stowe copy, Shumard says, stems from one of several studio sittings that yielded multiple plates ready for reproduction and distribution to an eager public.

The majority of daguerreotypes produced in mid-19th century America were designed for private rather than public consumption. “They are very intimate objects, [made] to be held in your hand and looked at,” says Shumard, or perhaps gifted to a loved one as a personal memento.

The medium’s capacity for conveying familiarity is apparent in an 1855 half-plate of abolitionist and women’s rights advocate Lucy Stone, who took the then-unheard of step of keeping her maiden name upon marrying husband Henry Blackwell. In the portrait, Stone’s features and clothing—including hand-colored peach-tinted flesh and a pink pigmented skirt—are accentuated in an attempt to make the keepsake image look more lifelike.

Other notable images not to be missed include an 1850 quarter-plate daguerreotype of poet Sarah T. Bolton, who urged readers to “Battle for the right. / And break the chains that bind / the mighty to the few,” and a sixth-plate ambrotype of Olive Oatman, a young woman who was abducted by Native Americans and spent five years in captivity, first as a slave of the tribe that murdered most of her family and later as an adopted member of the Mohave people.

Oatman’s 1856 return attracted national attention. She was the subject of an exaggerated 1857 account, Life Among the Indians: Captivity of the Oatman Girls, and traveled the country on a publicity lecture circuit. Her likeness, meanwhile, was cemented in the public’s imagination by blue markings tattooed across the length of her chin. This facial tattoo, applied with cactus ink, is just discernible in the exhibition ambrotype, which is among the National Portrait Gallery’s most recent acquisitions.

Referencing the Oatman and Brown Patten ambrotypes, Shumard concludes, “I’m so excited that we have these ambrotypes of [women] who are not household names but. . . who experienced such trying circumstances and managed to survive.”

“Women of Progress: Early Camera Portraits,” a project of the Smithsonian American Women’s History Initiative, Because of Her Story, is on view at the National Portrait Gallery on the museum's first floor through May 31, 2020.