In This Historical Moment, Here’s How to Collect Your Thoughts 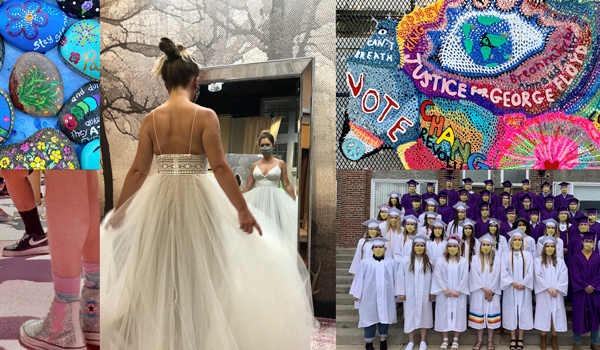 The Anacostia Community Museum wants to know not just how you’re surviving this moment, but how you’re being resilient. Photo collage by Meilan Solly

Twenty years from now, even ten, will we remember the bravery this pandemic required of us? Will you be able to recall on-demand the lessons this moment is revealing about your family, your community, your country, yourself? Will you recollect the un-routine routine of sheltering in place every day and arming yourself with a mask and sanitizer to venture into public spaces? Will you remember what the experience brought out of you?

Chances are you won’t, at least not with complete accuracy. A 2001 study by Danish psychologist Dorthe Berntsen found our brains process and retain traumatic and non‐traumatic events differently and the bad typically stands out much more vibrantly than the good. We’ve experienced one collectively shared emotional shock after another in the past five months, from a coronavirus death toll that has never stopped rising to witnessing the recorded footage of the life being deliberately choked from another black citizen. This year, for all of its catchphrases about 20/20 vision, has offered more to mourn than celebrate en masse.

Still, there’s something precious and valuable in the daily living of everything that’s going on around us. Melanie Adams, director of the Smithsonian’s Anacostia Community Museum (ACM) in one of southeast Washington, D.C.’s most historic neighborhoods—Frederick Douglass’ estate sits just a mile away atop a hill overlooking the city—is eager to document how residents in the District and states nationwide are navigating these experiences. In May, the ACM launched #Moments of Resilience, an online diary series and exhibition about life during the pandemic. When protests about George Floyd’s murder erupted and overlapped into two tandem, pivotal moments, Adams invited the local and online community to share personal perspectives about the revolution for racial justice, as well.

“Resilience to me is the ability to come through on the other side, the ability to take a situation that may not be the best and find the good in it, find a way to work through it. Communities of color have been resilient since we were brought to these shores,” Adams explained. “So it was really important for us to be able to talk about the resilience of the community during this time and not just all of the horrible things that were happening.”

In one post, a bride-to-be in North Carolina admires the reflection of her gauzy, ethereal wedding gown in a full-length mirror. The face mask she’s wearing isn’t a typical accessory but it’s an indicator of an exceptional life moment encapsulated in a larger pandemic moment.

“I was supposed to have a big wedding on June 20th, 2020 in Asheville, NC. I am now exchanging vows with my future husband with our parents as the audience instead of the original 200 guests. We are excited for this intimate experience,” she wrote.


In another entry, a UPS driver in Atlanta shares a masked selfie in her delivery truck alongside. “Although the days can be stressful, the volume is steadily increasing, and moments with my family are shortened,” she writes, “I wouldn't change my position of being on the frontline, serving others who are in need.”

When the Anacostia Community Museum was founded in 1967, the demand for racial justice was boiling over then too. The “long, hot summer” that year, as it was eventually nicknamed, saw riots explode in black neighborhoods across more than 150 U.S. cities and unrest in dozens more, including D.C. Because of the COVID-19 outbreak, the museum’s physical building—fresh off a seven-month, $4.5 million renovation project completed last year—has been closed to visitors since March 14. But Adams says #Moments of Resilience is a pivot to continue the work the ACM has always done, even as physical distancing has been new.

She estimates the site receives five to seven submissions a week, some from people who prefer to remain anonymous, others from folks who don’t want their entry to be publicly shared at all. Regardless, every #Moments of Resilience post will be documented as part of the ongoing project and eventually reviewed to be included in the final collection. This month, ACM partnered with AARP to offer an interactive, two-part workshop to help people of all ages, especially those over 50, tell their stories of perseverance. Participants were encouraged to submit their recollections to the #Moments of Resilience project. Adams hopes to create diversity in age range to ensure multigenerational voices and perspectives are represented.

“When all of this is said and done, whether it's COVID-19 or the demonstrations, we'll have the facts and figures. What we want are the stories that talk about a wide swath of the human experience,” she explained of her idea. “A lot of organizations have been rolling out initiatives related to COVID-19. I really wanted to make sure ours was different. I wanted to make sure we weren't just talking about how people were surviving but how they were being resilient. What were the small things they did on a daily basis that got them through? Whether that was writing in their journal or taking a walk around their neighborhood, what were they doing to feed their soul?”

Adams, who is the daughter of two teacher parents who fortified her 25-year career in higher education and community engagement at Midwest institutions including the Missouri Historical Society, feels like the majority of her career has been leading to this powerful, change-making moment. It feels different, she says, even from the protests and collective outrage that have torn through the country in the recent past.

“I was in St. Louis for Mike Brown, I arrived in Minneapolis a couple of months after Philando Castile. I feel like those protests were in larger cities: Chicago, L.A., New York. Here you're seeing protests in small towns, even if it's just one woman with a sign walking down the middle of Main Street saying, ‘Black Lives Matter.’ These are not one-off incidents anymore,” she said. “People are really seeing a larger picture of racial inequality that has been embedded in this country since its founding and everyone is now coming together to recognize this as a problem.”

As the pandemic and the fight for racial justice continues, #Moments of Resisilence will remain available with no hard end date planned yet, Adams assures. There are too many experiences, especially the seemingly ordinary, common, real-life experiences of people living in a moment that is as extraordinary as it is uncertain, that deserve to be documented, and she wants the Anacostia Community Museum to be a leading organization doing the work. Eventually, she says, she’ll follow her own advice and contribute her own mini-memoir to the project.

“One of the things that's really important is to remember that your story matters. So many people think, ‘why would anyone care that I kept a journal during this time or I did daily blogging or videos?’ But you're going to want to look back and think about what happened in 2020. You want to be able to reflect back on them and remember what was happening during that time beyond what you were seeing in the news media and statistics, but personally what you were doing,” said Adams. “So even if people don't want to share their stories with #Moments of Resilience, though we hope they would, I would still encourage people to take pictures, write diary entries, keep their child's artwork from this time, really just capture these moments.”

#Moments of Resilience, an online archive from the Smithsonian's Anacostia Community Museum, can be accessed online or by telephone 202-335-7288.