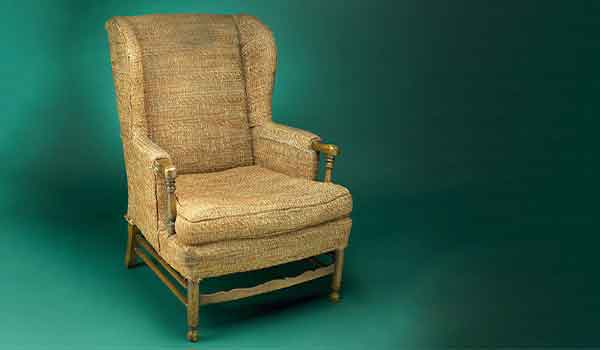 The TV sitcom “All in the Family” began airing January 12, 1971 and became a cultural phenomenon throughout its nine-year run. At the Smithsonian Archie Bunker's chair is a visitor favorite. NMAH

The two rickety pieces of furniture were well-worn even before they were bought at a secondhand store for less than $10 for use in a television pilot. They became iconic representations of one of TV’s most revolutionary shows, “All in the Family,” which premiered 50 years ago.

Whatever their appearance, the chairs of Archie and Edith Bunker may as well have been thrones for the working-class family from Queens. His was a wing chair in faded brown upholstery denoting his reigning place in the household as a bigoted patriarch. Hers was smaller with wooden arms that would help propel her up to fetch Archie another beer on demand. Edith (played by Jean Stapleton) kept the peace between her husband (played by Carroll O’Connor) and the couple’s feminist live-in daughter Gloria (Sally Struthers) and her liberal husband Michael Stivic (Rob Reiner).

The household’s many generational clashes that defined the series over its nine seasons in the 1970s, both mirrored and made mirth from the myriad political and social divisions in American at the end of the 1960s. Produced by Norman Lear and Bud Yorkin, the show boldly addressed topical conversations of the day and meet head on the divisions festering in American families.

“When you look at television history, you can divide it in two eras, before Norman and after Norman,” says Jim Colucci, who is co-author with Lear on the forthcoming All in the Family Book.

“The show changed everything,” he says.

As modest as they may look, the chairs, standing stoically behind plexiglass in the Smithsonian’s National Museum of American History, are second only to Judy Garland’s ruby slippers from the 1939 film The Wizard of Oz as its pop culture must-see. “It’s one of the things people know we have—even more so than Abraham Lincoln’s hat or George Washington’s uniform,” says Ryan Lintelman, the museum’s curator of entertainment curator.

And just as the show was a groundbreaker in reflecting American culture—and ushering in a string of other TV hits from creator Norman Lear, from “The Jeffersons,” “Sanford and Son” and “Maude” to “Good Times” and “One Day at a Time” (a current remake of which is ending with its fourth season)—the arrival of the chairs to the museum also helped change the course of collecting at the American History Museum from strictly historical artifacts to iconic cultural touchstones.

“This is one of the first accessions related to popular culture and entertainment” to a museum that was then named the National Museum of History and Technology, Lintelman says. “It was very focused on industrial history, . . showing off American innovation,” Lintelman says.

The museum’s new Bicentennial exhibition, “A Nation of Nations,” reflected on social and cultural history including entertainment. “This was the first television acquisition that we made, so it was a big deal,” says Lintelman. “It was a watershed moment in the history of the Smithsonian, to take this really seriously and put these alongside the military and political history of this nation.”

It’s very in line with what the Smithsonian collects today, Lintelman says. “We’re not just collecting things that were popular or were nostalgic,” he says, “but the fact that entertainment actually shapes the conversations that we have in the moment. So this show that was tackling race and culture and society and all these issues that were happening in politics at that moment, brought those to people’s living rooms in a new way, through entertainment.”

And when “All in the Family” began in 1971, the show reflected the cultural divide that came out of the 1960s, and was quite different from anything else on TV. So much so that the first episode on January 12, 1971 was prefaced with a disclaimer, warning that the show “seeks to throw a humorous spotlight on our frailties, prejudices and concerns. By making them a source of laughter we hope to show—in mature fashion—just how absurd they are.”

From the very first episode, “you have Archie using all kinds of stereotypes,” says, Colucci. The show was wildly inappropriate by today’s standards with Archie voicing racist epithets in his frequent name calling, especially for his son-in-law Michael, who he often referred to as Meathead and by another slur for his Polish heritage. “It was the kitchen sink of testing boundaries,” says Colucci, adding that no topic—from menopause and impotence to rape and sexual assault—was off the table.

“In just that first season, the show went on to bring in one of TV’s first gay characters,” Colucci says. “They fought to get storylines about all these topics on the air, on this daring new show.”

“All of these racial slurs and socially inappropriate epithets were spewing out of Archie’s mouth, and I’d never even heard these words,” says the actor Sally Struthers, who won two Emmy awards for her portrayal as Gloria Stivic. “I kept having to ask what they meant.”

When the show premiered, nobody was quite sure how all of this would be received. “We were told that all of the CBS affiliates around the country had been manned with extra operators to take all the angry phone calls.” says Struthers. If they were overwhelmingly negative, she says, the cast would be quickly disbanded.

“We were all very nervous when we arrived for rehearsal the next day. We were told, yes, the affiliates did receive many phone calls—more than they’d ever received about anything. They were swarmed with phone calls from every region of the U.S. But fortunately for us, 90 percent or more were excited,” says Struthers.

The callers seemed happy, asking ‘What was that?’ and ‘Is it going to be on again next week?’”

But the initial reviews were mixed and the ratings would build slowly. Still, the show’s stars Carroll O’Connor and Jean Stapleton were chosen to open that year’s Emmy broadcast with Archie sniping about “all them Hollywood liberals and Commies,” and the new show picked up three awards.

From then on, “All in the Family” would become a cultural phenomenon and a ratings leader throughout its nine-year run, changing the notion of what a TV sitcom could be or comment upon. Earlier sitcoms of the era were rural based amusements like the three previous CBS shows—“The Beverly Hillbillies,” “Green Acres” and “Hee Haw.” But Lear's daring new show, says Colucci, “brought on a liberation of television in the 70s.”

Struthers remembers the director of the show gathering the mostly little-known cast together when the buzz started climbing. “He told us, ‘I want you to know and be prepared, all of you, that your lives are going to change.’”

Indeed, Struthers says that while she and her co-star Rob Reiner, the “Meathead” who Archie kept kicking out of his favorite chair, could no longer pop over to the nearby Farmers’ Market without getting mobbed. “Life changed,” she says. “It turned upside down.”

Pamela Putch, daughter of Jean Stapleton, who died in 2013 at age 90, recalls being on a trip to Hawaii where fans mobbed her mother at a gas station. “All of a sudden, the doors flew open and this family piled into the car, hugging my mother, kissing her, telling her how much they loved her. If it was today, we would have been terrified. But back then it was this incredible outpouring of love and appreciation,” Putch says. “To come from having a normal life and going into that was pretty shocking.”

Yet it provided long careers for each of the cast members. “It was the launching pad that gave me a career that goes on and on,” says Struthers.

It seemed natural that the central set of the drab living room design—the two Bunker chairs—were worthy of the Smithsonian when they were given with much ceremony to the Institution in 1978.

As Lear recalls in his 2014 memoir, “President Carter invited us all to the White House and it was a thrill to stand there in the Oval Office listening to our president talk about episodes he and Rosalyn had seen and remembered.” All of this took place immediately after the weekend of the 1978 Camp David Accords.

“That was a day to remember,” Stapleton said in a 2000 interview. After Stapleton died, her family donated to the Smithsonian her papers and other artifacts, including her Emmy Award for Outstanding Actress in a Comedy Series and Edith’s apron to join Archie’s hat, on an end table with one of his beer cans.

The event involved celebrity visits to Congress and the White House, a ceremony hosted by Bette Davis and a big dinner at the famous Washington D.C. restaurant, the Old Ebbitt Grill. Struthers also remembers a wild afterparty at a Washington socialite’s home that featured an impromptu bump and grind from no less than Walter Cronkite.

“It was the best night of our lives,” she says.

But despite all the celebration, there was a hitch with the chair donation. Though they were given at the end of the eighth season, when everyone thought the show would end, the network ordered up a ninth season and asked if the donation could be deferred.

Because that would be against Smithsonian protocol, replicas of the chairs had to be specially built for the final season.

“They had to go to a mill in England that specialized in custom textiles to have the fabric handmade to match the original fabric, then they were artificially aged to look like the ones that had been on set before,” says Lintelman. “Over $15,000 was spent to recreate the chairs for the final season.”

Only once have the chairs been lent from the Smithsonian collections—when Norman Lear won the Kennedy Center Honors in 2017 and they were part of the set decoration of the telecast. When Reiner tried to sit in Archie’s chair during rehearsal, he was yelled at once more—just as Meathead had been in the show decades earlier.

The National Museum of American History is currently closed due to Covid-19 concerns. The All in the Family chairs will be part of the upcoming exhibition there, “Entertaining America,” scheduled to open in 2022.

Editor’s Note, January 13, 2021: In a previous version of this story, an interview with Jean Stapleton conducted in 2000 was originally reported to have taken place in 2015. We regret the error.