In 1923, when the Freer Gallery of Art became the first art museum to open on the National Mall in Washington, D.C, one room was devoted to the watercolors of the American artist James McNeill Whistler. The museum held one of the largest collections of such works in the world. The delicate works in gold wooden frames, despite being highly sensitive to light, were on view for about a decade before they were removed. But time had taken its toll on the works.

The artworks in the Freer collection cannot be loaned to other museums because of restrictions dictated by the founder's will, so for more than 80 years, Whistler’s delicate watercolor gems were rarely seen. After much scholarship and conservation, the current exhibition, “Whistler in Watercolor,” brings the works once again to the public eye.

The delicacy and subtlety of the Whistler watercolors are in contrast to a bigger, splashier new Whistler exhibition at the Freer—“The Peacock Room in Blue and White,” in which the famous room-sized work is newly decorated as it was originally in the 1870s, with the blue and white Chinese ceramics of the original patron Frederick Leyland in London.

When Detroit industrialist Charles Lang Freer first met Whistler in his London home in 1890 to look into collecting more of his art, the painter had been including watercolors in his repertoire for a decade.

“This was a period in Whistler’s career when he urgently needed to reinvent himself, both financially and professionally,” says Lee Glazer, the Freer|Sackler’s former curator of American Art, who is now director of the Lunder Institute for American Art at Colby College.

This was not a good period for Whistler. In 1878, he had lost a libel suit against the art critic John Ruskin, a year after losing his patron Frederick Leyland over a financial dispute regarding the very Peacock Room now in the Freer. By 1879, Whistler had declared bankruptcy.

Born in Lowell, Massachusetts, Whistler studied in Paris and eventually moved to London. He learned watercolor technique as a boy and occasionally used it for preparatory studies early in his career, Glazer says. “But despite the tremendous popularity of watercolor in the British art world, and Whistler’s ultimate desire for success within that art world, he never seriously embraced watercolor until the 1880s.”

“Whistler rediscovered watercolor,” Glazer says, “during a sojourn in Venice between 1879 and 1880 and upon his return to London he created in his next step a prodigious number of these seemingly effortless works, depicting all manner of subjects.”

In his own writings, Whistler described his watercolors of figures, landscapes, interiors and nocturnes as “dainty,” “beautiful” and “portable.” He called them “delightful little things” and “amazing little beauties” but also “a wonderful game”—a scheme to bolster sales alongside similarly muted oil paintings and pastels in what Glazer calls “very carefully orchestrated solo exhibitions in both London and New York between 1884 and 1889.”

The watercolors, she says, “were intended to expand his market base to include what he described as rich Americans, shopping for art. But they were also, for the artist, a new way to demonstrate certain deeply held avant-garde aesthetic principals regarding finish, the value of artistic labor and verisimilitude.”

They were also a handy way to further his complicated and controversial ideas of art, conveying emotion through tone and color, through a more accessible medium.

Despite their big ambition, Glazer notes that the watercolors are “quite tiny. They’re itty bitty. None of them are bigger than a sheet of typing paper, and many of them are no bigger than an index card.”

But framed in the same kind of gold frame he used for his paintings and with no further matting to distinguish them as lesser than oils—he meant for them to have greater presence than mere sketches.

He tried variations of his nighttime “nocturnes” in watercolor, and lent his light touch to waterscapes such as The Ocean Wave and Blue and Silver-Chippy Channel.

There are landscapes, too, as the green-field dominated Green and Silver—Beaulieu, Touraine and the waterfront scenes of St. Ives: Cornwall and Southend Pier.

But his vivid portrait of Molly Finch is comparable to the oils he was commissioned to do. Further, reflected infrared images taken in the Freer’s lab shows how it had been reworked like an oil, reducing the width of the subject’s violet skirt.

And while there was some restoration as well as a study of the watercolors, some of their colors simply didn’t survive their long exhibition decades earlier. The only evidence of the “blazing yellow background” on Milly Finch described when it was first unveiled, was tucked in the edges hidden by the frame from light.

Light, of course, is also an issue in displaying The Peacock Room, whose shutters are flung open just once a month, on the third Thursday, to help preserve what Glazer calls “not only the most valuable piece of art in the Smithsonian collection, but also the most popular work of art in the Freer Gallery.”

Whistler’s interior mural, whose full title is Harmony in Blue and Gold: The Peacock Room, was completed when Leyland, the owner was out of town, to pair his portrait The Princess from the Land of Porcelain with a giant decorative peacock on the opposite wall. It was also intended to better show off Leyland’s collection of blue and white Kangxi-era (1662-1722) ceramics that were at the time the rage of Victorian England.

By the time Charles Lang Freer saw the room in 1904, a year after Whistler’s death, the room with its painted ceiling and walls and its lattice of golden shelves had been emptied of the blue and white porcelains, which had been long since dispersed in estate sales following Leyland’s death in 1892. As big a collector of Whistler as Freer was, he wasn’t sure he wanted the room at all.

Glazer says Freer was “uncertain how an extravagant dining room fit into his growing collection of Asian antiquities and what at the time were cutting-edge contemporary American paintings.” (It had been Whistler who had nudged Freer into the world of Asian art).

In the end, Freer did buy the Peacock Room and installed it in his Detroit mansion, filling the 187 shelf nooks with his own collection of Asian ceramics. And when Freer’s vast collection was donated to the nation for the Smithsonian’s first art museum following his death in 1919, the gift included the Peacock Room, which was a hit from the moment of the museum’s first opening in 1923.

In Washington, the Peacock Room reflected Freer’s tastes and vision, with the monochrome glazes of Asian ceramics tucked into the shelves rather than Leyland’s blue and white Kangxi, which was at the turn of the 20th century was considered “something of an old fashioned Victorian taste,” Glazer says.

Taking a cue from period photographs of Leyland’s room, the London incarnation of the room was recreated with authentic 17th and 18th century Chinese vessels in the museum’s collection, along with some 120 newly commissioned pieces made in Jingdezhen, China. Rather than reproductions, the commissioned pieces reflect the continuity of the 1,500-year old tradition of making and decorating porcelain in that region. 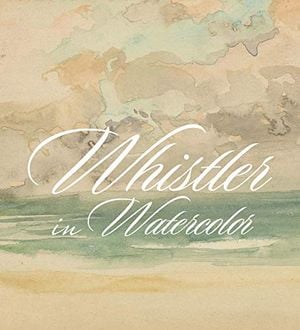 The first systematic study of Freer’s amazing treasure trove of more than 50 watercolors by James McNeill Whistler and includes figures, landscapes, nocturnes and interiors. Providing both an art-historical context that looks into the contemporary reception of the works, as well as rigorous scientific analysis of Whistler’s materials and techniques, this volume offers a groundbreaking look into an overlooked segment of the celebrated artist’s oeuvre.

The pieces from the museum collection are on the east and north walls of the room; the newly commissioned pieces in the Kangxi style are on the west and south walls.

As a result, Robinson says viewers can now see “for the first time in more than 100 years the way the room appeared after Whistler painted the dining room.”

Taken together, Whistler in Watercolor and The Peacock Room in Blue and White help define the eye of the museum’s founder, with viewers able to join what Robinson calls “a collector’s journey.”

“Whistler in Watercolor” continues through October 6, 2019 at the Freer Gallery of Art, in Washington, D.C. “The Peacock Room in Blue and White” will be an ongoing exhibition.