The Stories of D.C.’s Streets

A new exhibition highlights the people behind some of the capital city’s roadways, plazas and parks 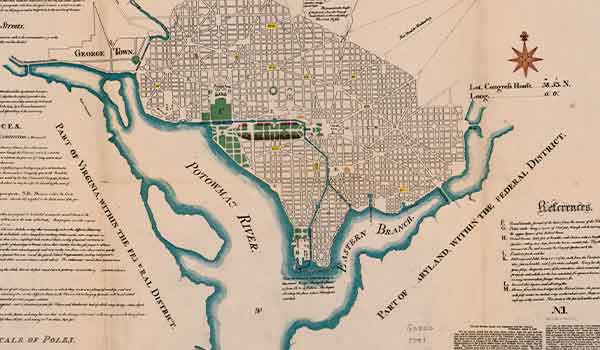 Shaped mostly like a diamond, Washington, D.C. is organized by geographical divides centered on the U.S. Capitol and the White House, using mathematical principles employed by the original designer, Pierre Charles L’Enfant. LOC

Naming a road, park or building might be a way to honor a local or national hero, recognize a a native animal or plant, honor a financial contributor, or mark a geological point of interest. With many areas in the nation re-evaluating the names that have been assigned to highways, streets, squares and schools, the Smithsonian’s National Portrait Gallery is offering a timely and thought-provoking dive into the naming of the streets of Washington, D.C.

The act of naming “has histories woven into it,” whether it is a building, a street or a new baby, says curator Leslie Ureña. A street name may get overlooked, “but when we talk about them or write them down on an envelope, give them to an Uber driver, we’re repeating those names, and in a way we’re invoking that history, as we say them over and over again,” she says. “I hope ‘Block by Block’ prompts visitors to not only see D.C. a little differently, but also to approach the streets and spaces in their own communities with a renewed sense of curiosity,” Ureña says.

Ureña, who has an abiding interest in urban planning, has been keen on how Washington has evolved since it was first authorized as the nation’s capital in 1790 and how some of the streets she passed on a regular basis had gotten their names. She hatched the idea for an exhibition and decided she would see if any of street names matched up with photographs in the Portrait Gallery’s collections. “Matching up the names with our collection was part of the adventure,” says Ureña.

The exhibition examines the lives of individuals that have lived and gave life to the neighborhoods in Washington D.C.’s four quadrants, known as Northwest, Southwest, Southeast and Southwest. The city, which is shaped like a diamond, except where it meets the Potomac River on its southwest side, is organized by geographical divides centered on the U.S. Capitol and the White House, using mathematical principles employed by the original designer, Pierre Charles L’Enfant. The streets that emanate from the Capitol building run in a grid pattern; avenues were placed on angles according to geometric divides. Two sets of streets running north-south are numbered, and two sets of streets running east-west are lettered. One set of numbered streets starts east of the Capitol, and the other to the west. The two sets of lettered streets begin north and south of the Capitol.

The McMillan Commission—chaired by Senator James McMillan of Michigan and including architects Daniel Burnham and Charles McKim, sculptor Augustus St. Gaudens, and landscape architect Frederick Law Olmsted, Jr.—probably made the greatest imprint on the city’s layout. The 1902 report harkened back to the original plan from Pierre L’Enfant, who was commissioned by George Washington to design the capital. It also established the framework for the National Mall and a more orderly design for the city. Ureña says many streets were named or re-named in the wake of the report.

In the Northwest quadrant, Ureña highlighted Clara Barton, the namesake of a scenic parkway that runs along the north shore of the Potomac River for 6.8 miles and connects the Maryland suburbs to the city. Barton, founder of the American Red Cross and a Civil War nurse, had a home in Glen Echo, Maryland, overlooking the city’s famous river that divides it from the state of Virginia. The house was established as a national historic site in 1974. The parkway was renamed in her honor in 1989. It was also a way to eliminate confusion, says Ureña, citing the Congressional Record and other written accounts of the renaming. That stretch of road on the north side of the river was previously called the George Washington Parkway, which was the same name used for the parkway that also ran on the Virginia side of the river, even though the two roadways never connected.

Oliver Otis Howard—a Civil War general whose home is located on Howard Place N.W. on the campus of Howard University—is another figure in the exhibition. A founder of the historically Black university, he has a complicated history. A staunch abolitionist who led the post-War Bureau of Refugees, Freedmen, and Abandoned Lands, which offered relief to newly-freed African Americans, Howard also was the leader of the U.S. Army’s forced removal of the Nez Perce tribe from Oregon.

In the tiny Southwest sector, Ureña highlights Benjamin Banneker, the African American mathematician and astronomer, who was born free in Ellicott’s Mills, Maryland, and who assisted chief surveyor Andrew Ellicott in mapping out the city’s boundaries. Banneker spent almost a year on the survey and then created an almanac of Pennsylvania, Delaware, Maryland and Virginia, which was published in 1792. The city dedicated Benjamin Banneker Park in Southwest in 1971; there’s also a Banneker Drive in Northeast, and Banneker High School in Northwest, among other places named for him.

As in many cities, Washington has a major thoroughfare named for Martin Luther King, Jr. MLK Avenue runs from Southwest D.C. and continues across the Anacostia River into Southeast, where it meets Malcolm X Avenue, a tribute to the Muslim leader. King received his naming honor in 1971—not long after his murder in 1968. Malcolm X Avenue was named in 1982, says Ureña, who notes that the activist’s name also was bestowed upon a park in Northwest D.C., which is also known as Meridian Hill Park.

Frederick Douglass has several streets and a bridge named for him in Southeast, where he bought a home and land, becoming one of the first African Americans in Washington to break a covenant. The deed of the estate, which is now a national historic site, prohibited Black people from owning the home. Douglass was appointed in 1874 as the president of the Freedman’s Savings and Trust Company, chartered by Congress to guard Black Civil War veterans’ and the savings of the enslaved. The bank eventually failed, but in 1877, President Rutherford Hayes appointed Douglass to be the U.S. Marshal for the District of Columbia, a position that required U.S. Senate confirmation. Later, Douglass served as Minister to Haiti from 1889 to 1891.

Most Washington D.C. subway commuters are familiar with Fort Totten—a stop on the Metro system’s red line before it crosses into Maryland. The station's provenance is likely less well known. The fort, completed in 1863, near the Soldiers’ Home where President Lincoln had a summer home close to Silver Spring, Maryland, was part of Washington’s Civil War defenses—a system of fortifications and artillery batteries that ringed the city’s northwest, northeast and southeastern quadrants. On the southern side of the Potomac (the southwestern area of the District at the time) fortifications were built on the hills above the river in and around what is now Arlington, Virginia. Fort Totten was named for Joseph Gilbert Totten, a Brigadier General who was the U.S. Army’s chief engineer. Totten, a Smithsonian Regent, and member of the National Academy of Sciences, developed ways to make stronger, thinner walls for fortifications, and was a scholar studying how coastlines were impacted by environmental change, says Ureña.

Other Washington locations named for the general include Fort Totten Park, Fort Totten Drive, Totten Mews and Totten Place N.E. The Totten name can be found on forts and parks all over America. The exhibition features a portrait of Totten in uniform, reproduced from a glass plate negative of a photograph taken by Matthew Brady’s studio in 1863, about a year before Totten’s death. The portrait is one of several photographs in the show that came from the Portrait Gallery’s Frederick Hill Meserve collection, a holding of some 5,400 glass plate negatives that were digitized in 2018, says Ureña.

The name Porter is also familiar to many Washingtonians as Porter Court in Northeast and Porter Streets in Northeast and Northwest are named for various Porter family members, who had careers in the U.S. Navy. David Dixon Porter fought alongside his father Commodore David Porter in the West Indies in 1824, when he was 11 years old. David also was with Admiral David Farragut at the 1862 Battle of New Orleans, and from 1865 to 1869, was superintendent of the U.S. Naval Academy in Annapolis, Maryland. Farragut Street runs between New Hampshire Avenue and 14th Street in Northwest.

Washingtonians have long fought for their own voice—without congressional interference—and naming streets is just one aspect of asserting that independence.

A year later it had stuck in Washington. The city in July 2021 began construction to make the plaza a permanent part of Washington’s streetscape, with a pedestrian walkway, new landscaping and attractive lighting.

“Block by Block: Naming Washington,” is on view at the Smithsonian's National Portrait Gallery through January 2023. The photographs in the show are reproductions, as the light cannot be controlled in that particular gallery.