In some respects, Washington, D.C., in the 1850s was an unlikely place to usher in a golden age of American natural history. Philadelphia and Boston had long been the traditional centers of American science, with the founding of the Academy of Natural Sciences of Philadelphia in 1812 and the Boston Society of Natural History in 1830. The nation’s capital was still viewed as a provincial Southern town. The Smithsonian Institution, founded in 1846 after a bequest by British chemist and mineralogist James Smithson, was tasked with “the increase and diffusion of knowledge.” But, cut off from the rest of the city by the foul-smelling Washington City Canal, its isolated grounds attracted muggers and other scoundrels looking for easy prey.

Under the leadership of Joseph Henry and his assistant secretary, Spencer F. Baird, by the mid-1850s the Smithsonian became the nexus for an exuberant and ever-changing gathering of brilliant, young naturalists. This group—part sober research collective, part Animal House shenanigans—called itself the Megatherium Club. Collectively its members were devoted to advancing the cause of American science in a time when American naturalists were fighting for respect from more established European science. Their goal was to find, describe and classify every known animal and plant on Earth, and they were audacious enough to believe such a goal was within their grasp. Often risking their lives, they embarked on arduous collecting expeditions, facing the dangers and discomforts of nature to bring back creatures that had never been formally described by science. 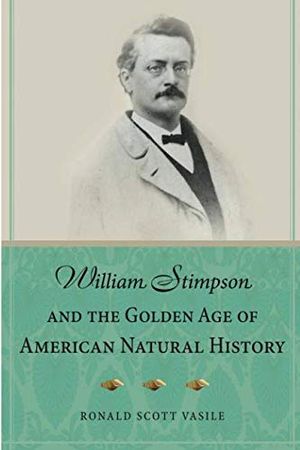 William Stimpson and the Golden Age of American Natural History

This first-ever biography of William Stimpson situates his work in the context of his time. As one of few to collaborate with both Louis Agassiz and Spencer F. Baird, Stimpson's life provides insight into the men who shaped a generation of naturalists―the last before intense specialization caused naturalists to give way to biologists.

The club’s ringleader was a Boston-born zoologist named William Stimpson. Only 24 when he arrived in Washington, D.C., in late 1856, Stimpson had already established himself as one of the leading naturalists of his generation—an expert in the study of marine invertebrates, especially crustaceans and mollusks. While still a teenager he had studied with Harvard’s Louis Agassiz, the most famous and flamboyant naturalist in the country. Subsequently, Stimpson was appointed zoologist on the U.S.’s North Pacific Exploring Expedition, which traveled from Australia to China and Japan, and finally to the North Pacific Ocean, between 1853 and 1856. The expedition sought to both explore the North Pacific Ocean and to reinforce America’s commitment to trade with Asia. Stimpson's experiences as its explorer-naturalist shaped the rest of his career. He collected more than 10,000 specimens during the journey—everything from fish that walked up waterfalls to tiny crabs that exhibited all of the colors of the rainbow.

When the expedition returned, the specimens were housed at the Smithsonian. It would take Stimpson several years to describe and classify the marine invertebrates, so the gregarious naturalist, starved for scientific companionship after three years of isolation, rented a house near the institution and offered rooms to naturalists, artists and other “conducive” personalities. Each evening he presided over raucous dinner parties, fueled by copious amounts of alcohol. One resident recalled, “We have the highest kind of times at dinner every evening … we six are all naturalists & Geologists, and after working all day spend an hour in eating, drinking, & laughing immensely … we had a very jolly dinner last P.M. and a grand inauguration of a barrel of Ale, each one solemnly assisting to drive the spigot to the sound of martial music. . . So you perceive we continue as dissipated as usual.”

The group soon dubbed the house the Stimpsonian Institution and began calling themselves the Megatherium Club. The name was probably inspired by paleontologist Joseph Leidy’s paper on the extinct sloths of North America, which had been published by the Smithsonian in 1855. Leidy's reconstructions of Megatherium fossils, some of them quite fanciful, fostered the impression of an ungainly and almost comical looking American creature—a fitting mascot for Stimpson's crew.

There were precedents for such a club of brash, young naturalists. As an admirer of the late English naturalist Edward Forbes, Stimpson had no doubt heard of the uproarious dinners of the Red Lion Club, a similarly irreverent group that had coalesced around Forbes, whose members, including Thomas Huxley and Richard Owen, became the leaders of the English natural history community by the 1850s.

Like their English counterparts, the members of the Megatherium Club were united by youth, ambition, intelligence and a deep and abiding love of the natural world. Their days were spent in the bowels of the Smithsonian, hunched over jars of marine worms in alcohol or endless trays of fossils. Thanks to Baird, who was known as a “collector of collectors,” specimens arrived at the Smithsonian from all over the world. Stimpson and the other taxonomic zoologists sorted, described and classified this avalanche of specimens. Their work provided a solid foundation for future biologists by updating and standardizing the classification of flora and fauna.

At night they were ready to cut loose—drinking until dawn. Then they’d recover from their revelries with long walks on Sunday mornings, "the true Church for sedentary men," Stimpson said, when a friend wondered if perhaps they should attend church instead. Courting young ladies, especially with picnics along scenic Rock Creek, was another favorite leisure activity. “Spring is coming fast, glorious season which gives us new life while nature lures us to her arms," Stimpson wrote, in a letter to the geologist Ferdinand Hayden. “I shall now have more time and take more out-door recreation especially in the form of picnics with the girls, the dear angels some of whom I should certainly try to marry were it not for the pain of leaving the others.”

The Megatherium Club functioned as a needed mutual support system for the young American naturalists, whose work was often regarded with suspicion. The situation was particularly precarious in early 1858, when members of Congress denounced federal expenditures for natural history publications, leading Robert Kennicott, Stimpson’s closest friend in the group, to write a sibling that “Naturalists are going up! We have even gotten to be abused in Congress and if that ain't encouraging I don’t know what is.” Criticism flared again after the publication of Charles Darwin’s On the Origin of Species in 1859, when naturalists who accepted evolution were accused of denying God.

Stimpson's brash, party-dude ways provided encouragement that he and his fellow naturalists sorely needed. In 1857, when Hayden was exploring in the Black Hills region of South Dakota, Stimpson wrote: “I think you are all right and making your way and mark in the world in a firm and manly manner. You have certainly as good a chance in sensible minds as the papilionaceous [relating to butterflies] squirts of fashionable life who buzz about this place.” “Keep up a good heart and prove yourself a staunch Megatherium. Vid Megather By Laws XI.2.”

Stimpson knew better than most the importance of receiving encouraging letters from friends while in the field. While on the Jesup North Pacific Expedition, he had faced hostility from most of the crew, who resented a civilian naturalist in their midst, and he later likened his time aboard ship to being in a prison. His letters to Hayden provide further examples of his efforts to cheer up a fellow naturalist in the field—and the importance of the club as a motivator. “[D]epend upon it I will have a warm snug place for you a good fire in the grate and a barrel of beer in the cellar and a warm welcome on the lips,” he wrote Hayden, “and then we will go somewhere and see some little bodies in the evening, whose smiles will melt the ice in our hearts which may have been engendered by the cold contact with the world.”

The Megatherium Club had always been transitory. Its members usually came to Washington, D.C., for a few months to work up their specimens and confer with Baird before heading right back to the field, and Stimpson was the only constant, swinging from having a full house to enduring an empty one. “I am living a terribly lonely life,” he wrote despondently to one friend. On another occasion he told Hayden, “I shall miss you much this winter old fellow, in fact W.[ashington] seems lonely to me—all the club gone, the Meg.[atherium] broken up.”

When scientists were in town, the club's loud antics annoyed its neighbors, who eventually complained to Henry and Baird at the Smithsonian. Not wanting to tarnish Baird’s or the Smithsonian’s reputation, Stimpson announced in 1858 that the Megatherium Club would disband. This particular “species” of Megatherium did not become extinct however, but instead evolved into a more formal (and hence respectable) beast, known as the Potomac-Side Naturalists’ Club. Stimpson invited older and more respected scholars in Washington, D.C., to join as its founders. In early 1863, at the height of the Civil War, the original Megatherium Club coalesced again around Stimpson and Kennicott. This time, though, they now all lived in the Smithsonian building and the partying was more subdued, given the terrible death toll of the war.

Ironically, Stimpson and Kennicott’s close friendship hastened the final demise of the Megatherium Club. In 1865 Kennicott asked Stimpson to take his place as curator of the Chicago Academy of Sciences while Kennicott served as naturalist on the Russian-American Telegraph Expedition, an ambitious plan to connect Europe and America via telegraph. When Kennicott died suddenly the next year, at the age of 30, while exploring what is now Alaska, Stimpson stayed on in Chicago. He helped build the Academy into one of the largest and most respected natural history museums in the country, only to see his life’s work destroyed in the Great Chicago Fire of 1871.

Without either man, the Megatherium Club ceased to exist. But the work of its members showed that American science had finally caught up with that of Europe and indeed in some areas had even surpassed it. Above all else, Stimpson saw the study of nature as the ideal way to spend one’s time in an often confusing and wicked world. He summed up his view of life in 1857, “What more noble pursuit for immortal souls? Riches? War and Butchery? Political chicanery? Superstition? Pleasure? What we seek is TRUTH!!”

Ron Vasile is a history teacher at Lockport Township High School in Lockport, Illinois, and the author of William Stimpson and the Golden Age of American Natural History.