These Are the New Faces of American Portraiture

In its 16th year, the Outwin Portrait Competition reflects the stunning vision of contemporary portrait-based art 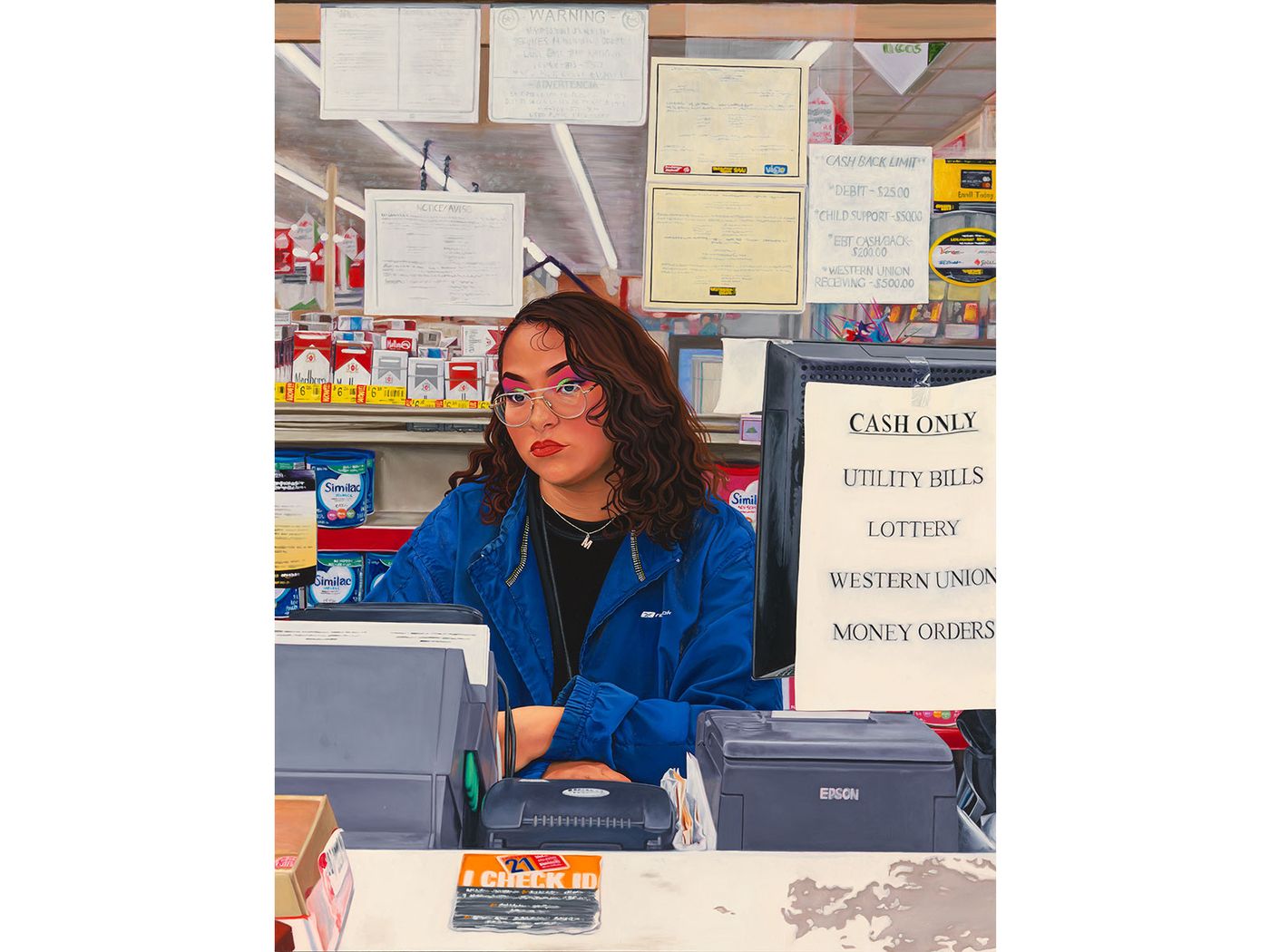 Many of this year’s 42 finalists (above: Customer Service Representative by Marianna Olague, 2020) delve into the American psyche, depicting life during the Covid era.

A Latina woman daydreams behind the counter of a check-cashing store. An ash-filled urn lies in state beneath a clouded sky surrounded by lily pads. An African American man tipping his hat is rendered with a black hole in his chest. These are faces of our times rendered by portrait artists pushing the boundaries of portraiture thanks to a benefactor, Virginia Outwin Boochever, a National Portrait Gallery docent who died in 2005 and left an endowment to the museum that made the competition possible.

The Outwin Boochever Portrait Competition “is a very high-profile way of bringing continued attention to portrait-based art in this country,” says past juror and artist Dawoud Bey, “even as it simultaneously has been ambitious enough to continually expand the definition of what that is.” The museum's triennial competition, now in its 16th year, says Bey, has become a force in the art world for expanding representation, giving emphasis to the portrayal of marginalized communities.

This year’s $25,000 first prize winner, Alison Elizabeth Taylor, crafted the exquisite Anthony Cuts under the Williamsburg Bridge, Morning, using a term she coined “marquetry hybrid,” for her unique blend of paints, inkjet prints and wood veneers. Taylor’s portrait of hair stylist Anthony Payne along with the competition’s others winners are currently on view at the Smithsonian’s National Portrait Gallery through late February.

Outwin Boochever was a formidable woman, according to her son, John Boochever. After attending Smith College as a French major, she became one of the first female commissioned officers in the Navy WAVES, he says. In 1945 she married Louis Boochever, a U.S. Foreign Services officer, and until the mid-1970s the family lived abroad, where she collected art and visited world-renowned museums.

In 1974, the family moved to Washington, D.C. where Outwin Boochever became a popular docent at the Portrait Gallery; she especially adored the museum's official presidential portraits, Boochever says.

Recognizing that other countries held portrait competitions, including England and Australia, Outwin Boochever foresaw that a U.S.-based equivalent would give rise to a new generation of American portrait painters dedicated to challenging the genre.

Without the Outwin, which this year had more than 2,700 entries, the world might have taken a bit longer to recognize the talents of Baltimore painter Amy Sherald, who in the 2016 competition took first place with Miss Everything (Unsuppressed Deliverance) for her innovative grayscale technique to express Black identity. Sherald would go on to paint First Lady Michelle Obama’s wildly popular portrait in a commission from the museum, another benefit that goes to the competition’s first-place prize holder.

This year’s 42 finalists delve even further into the American psyche, depicting life during the Covid era. Themes of isolation, loneliness, mourning and family ties are all conceptualized here. Content often matches the subjects, as artists turned to a range of materials from canvas to fabric, to metal, wood and cardboard when art stores closed during the pandemic.

Marianna Olague’s, Customer Service Representative, is a dazzling tribute to essential workers who kept the economy running during the pandemic’s lockdowns. Seated behind a check cashing desk, a young Latina woman stares distantly under harsh fluorescent lights: Olague’s stepsister at her job in El Paso, Texas. She is framed by the detailed likenesses of cigarette packs, baby formula and signs for “Cash Only,” “Utility bills,” and an “I Check ID” sticker.

“Every small detail is essential to the story,” says Olague. “She’s surrounded by an overwhelming amount of information, it’s almost like she’s silenced by it,” the El Paso-based artist says, adding that she used a photograph taken in 2019 of her subject for the oil painting, which was completed a year later during the height of the pandemic.

“After I completed the painting, it seemed perfect for the Outwin’s pandemic theme,” Olague says, with its emphasis on frontline workers, many of whom, like her stepsister, had to maintain their jobs, despite the health risks, or else go without during the long months of the pandemic.

Echoing the Outwin’s themes of bringing society’s hidden faces to the forefront, Olague wanted to show her stepsister’s full face, instead of hidden behind a face mask, because she wanted to emphasize how she brings her individuality to the job even though she wears a uniform and is supposed to blend in.

“She’s got this bright eyeshadow, bright makeup and a necklace with her initial on it,” she adds. “She’s trying her best to maintain her sense of self in an anonymous role.”

There’s something uniquely American and uniquely Latina about the painting reflecting the Covid conversations over who is considered an essential worker. “We all realized that it’s the people who work the hardest in our society, and they’re often least acknowledged,” says Olague.

The Outwin has helped make portraiture more popular again, she notes. “Portraiture is having a resurgence and painting people of color is especially important right now,” she says. “It’s incredible how many other Latinx finalists there were at the competition.”

Many of the Outwin 2022 artists are using portraiture to bring to light stories and life experiences that have not had the visibility they deserve,” says Taína Caragol, curator and director of the Outwin at the National Portrait Gallery.

“This is not the contemporary elite, which helps expand the democratic notion of portraiture,” she adds.

Take, for example, the unstretched piece of canvas depicting a woman in flight with her flowing garments rendered in embroidery, ink and other fabrics. The figure’s silkscreened face with chin thrust forward captures a fierce determination. This is Puerto Rican artist Elsa María Meléndez’s self-portrait, Milk—its creamy materials and luscious folds bring to life dynamic draperies first found in early Renaissance paintings. The bumps and ridges formed by the embroidery are like a relief map of a battered woman’s soul.

Meléndez says the self-portrait was made in response to the rise of violence against women in Puerto Rico during the pandemic. Feminist groups took to the streets to demand the government declare a state of emergency and the portrait criticizes expectations of female beauty that keep women oppressed. Shimmery milk drips from her breasts symbolizing a woman’s power to nourish society.

“I recycle textiles that have had other lives,” Meléndez says. “I use embroidery, sewing and different textile techniques that represent the docile elements identified with femininity and the domestic space, to criticize that and transform it into an act of rebellion.”

Much as Milk represents Puerto Rican women’s fight to be seen and heard, so too does the portrait Killed Negative #13/After Arthur Rothstein address history’s overlooked and obscured.

The collaboration between the first-rate draftsman Joel Daniel Phillips and poet Quraysh Ali Lansana gives voice to an African American gentleman whose photo was taken at the height of the Great Depression.

At that time, the New Deal’s Farm Security Administration (FSA) sent a pool of photographers—among them were prominent stars like Dorthea Lange and Walker Evans—across the country to capture on film the nation’s struggles. While searching the Library of Congress’s website, Phillips says he came across a slew of photograph negatives marred by a black hole punch, he says. “The first hole-punched photo I came across I thought was a contemporary intervention art piece,” Phillips says. “And then I zoomed into the photograph and realized it was a hole punch. And that led me down a rabbit hole.” These were the rejected images, or the “killed negatives,” that the FSA leaders pulled from the documentary visual record.

Phillip’s Killed Negative is a charcoal and graphite rendering of a rejected photograph taken by Arthur Rothstein. With every line in the subject’s face, from his furrowed brow, to his dark skin and whiskered chin to his rumpled jacket and the band on his bowler, Phillips breathes new life into a hidden figure. Lansana’s verse which accompanies the drawing, reimagines the thoughts racing through the mind of this Black man as he encounters a white photographer:

I am this moment, this life

who are you to pause my sunup

with your whiteness & picturebox

to demand stillness in a land

Phillips found more than 5,000 killed negatives in the FSA archive and has drawn more than 60 of them. He’s planning a traveling museum show of his works for some time next year, pairing them with Lansana’s verse.

Distinctive representation of a person is also at play in David Hilliard’s gripping portrait, Dad, at Manmade Pond, also drawing on the competition’s theme of family ties and intergenerational relationships, which were intensified during the pandemic.

In Hilliard’s triptych of photographs, we see a gorgeous, serene pond with lily pads and leaves scattered on top. The center panel shows a plain antique table with a small urn on top, filled with the ashes of Hilliard’s father, Raymond, at one of his favorite places in Southern New Hampshire.

For years Hilliard photographed his father and their close relationship, Hilliard says. “My dad was a character, a Navy guy, a little rough and tumble around the edges. He’s a universal character, the under acknowledged working-class guy.”

Raymond collaborated with Hilliard on many of the images and as he aged, they even planned out the last shot of the series, which would be when his father passed away.

“He wanted a full funeral and my image was to be an open casket shot of him with a copy of Henry David Thoreau’s book Walden in his hand,” he says, to show his father’s love of nature, birds and being outdoors.

“I was not looking forward to making that picture,” Hilliard says, and seeing the end of their very close relationship. “My father was the love of my life.”

In 2020, Covid hit the nursing home where Raymond was living, and he died in April of that year on Good Friday. Like many people Hilliard had to say goodbye over the phone to his father.

“I was yelling into the phone, ‘you’ve got to let go. I love you, you’re a great dad,’ and the nurse on the other end was crying because tears were running down my dad’s face as I told him I loved him.”

Because of the pandemic, Hilliard was forced to cremate his father and could no longer take the long-planned final casket photograph. So with his father’s ashes stored in a casket-like urn he decided to photograph the container in all of his father’s favorite places. The portrait, Dad, at Manmade Pond, doesn’t show a human face. But set in nature with its lush green background and clouds reflected in the water, the image undeniably brings to life his father’s love of the natural world, photography and art. The artwork represents how far the Outwin competition has taken the idea of what defines a portrait.

“My dad loved the Smithsonian museums and would have been so proud that this was accepted,” Hilliard says.

Dad, at Manmade Pond preserves memories in portraitraiture as as homage to the many losses Americans felt during Covid and decidedly breaks with the genre’s every tradition—a fitting tribute to the competition’s benefactor, says John Boochoever

Outwin Boochever would be glad to see the range and diversity of portraiture, and the diversity of Americans represented on the gallery’s walls, her son says. With the Outwin 2022 competition, she lives on in all the finalist’s depictions, forever expanding the idea of portraiture.

“The Outwin 2022: American Portraiture Today” is on view at the Smithsonian’s National Portrait Gallery through February 26, 2023. Voting continues online for the “People’s Choice Award” through October 16, 2022.

Diane Bernard is a freelance journalist based in the Washington, D.C. area. Her work has appeared in The Washington Post Retropolis history section, BBC.com, Wilmington Star-News and NPR.