From an ancient Egyptian plaque to a Ming dynasty scroll, explore the central role that falcons and hawks play across cultures and millennia 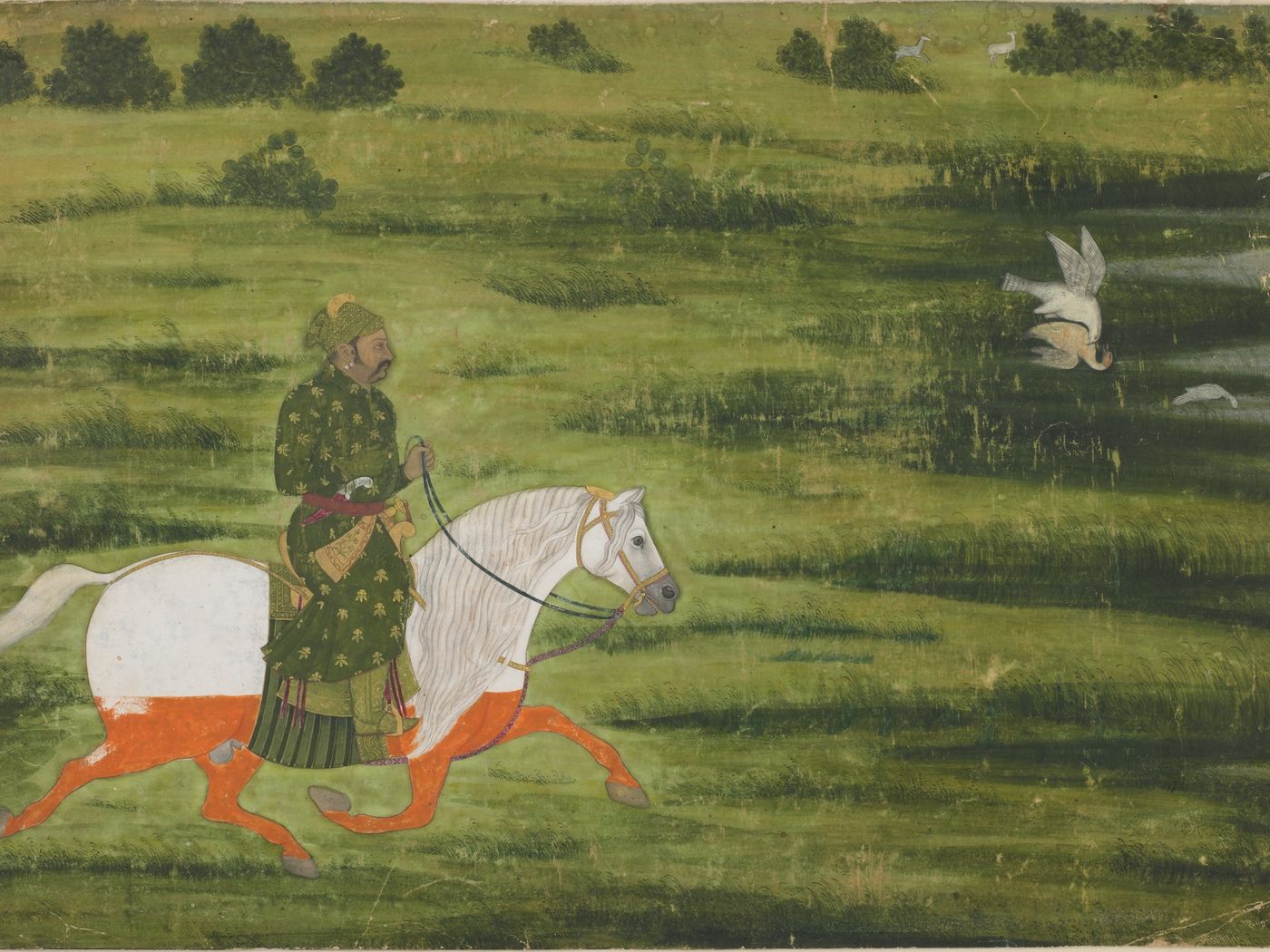 Just as the majesty of soaring falcons and hawks inspire awe today, so have they for centuries across different cultures around the globe.

Falconry—the sport of training the bird to capture prey and return it to human trainers—may date to 2,000 B.C.E. Scholars disagree where falconry first originated; some argue the practice began in ancient Mesopotamia, others say ancient Iran. By the time of the first Islamic dynasty, established by the Umayyads in Damascus around 661-750, falconry had become a ubiquitous practice of the ruling elite. It traveled west from Syria, across the Islamic world to the Byzantine empire, and east to China. In Egypt, one of the oldest gods, Horus, sported the head of the falcon, and is commemorated in statue, jewelry and hundreds of hieroglyphs. Falconry would also became popular among the royalty of medieval Europe.

A new exhibition at the Freer Gallery of Art, part of the Smithsonian’s National Museum of Asian Art in Washington, D.C. explores the central role birds of prey played in a variety of cultures. “Falcons: The Art of the Hunt” includes objects as old as an Egyptian limestone plaque depicting a falcon that dates from 664-525 B.C.E., to an early 18th-century Indian watercolor of a mounted hunter keeping an eye on a bird at the moment of an attack. The show features a Ming dynasty hanging scroll from the late 15th century of a hawk pursuing water birds, and from Iran, a drawing from the 1640s of two horsemen hunting with their birds.

Massumeh Farhad, the museum's chief curator and a scholar of Islamic art, says the collection was originally organized in 2020 prior to the Covid pandemic to complement the outdoor showcase by the Smithsonian Folklife Festival that would spotlight the United Arab Emirates, where falconry is especially cherished, and has evolved to a innovative practice of conservation. (The Festival is scheduled to return this summer with  "United Arab Emirates, Living Landscape | Living Memory," spotlighting the Emirati cultures of the UAE.)

“In our permanent galleries there are even more objects with depictions of falcons,” Farhad says. “Clearly it is an important part of the Islamic world, as well as Asia, so we decided it would be a nice exhibition and to also include works from ancient Egypt.”

There, birds of prey were not so much used by humans for hunting as they were worshipped for the protection they provided under their widespread wings, says Antonietta Catanzariti, the museum’s assistant curator for the ancient Near East.

“They have a very symbolic and religious importance in ancient culture,” Catanzariti says, adding ancient Egyptians “saw birds as powerful creatures flying over the skies, often represented with their wings open,” demonstrating their protection over the realm.

As such the two largest pieces in the exhibition are a pair of statues from the Ptolemaic dynasty of 305 to 30 B.C.E., standing nearly two-feet tall—although the crowns once on their heads have long since been removed. “The reason why we know that is that we have similar stones at the temple at Edfu, which is clearly a temple dedicated to Horus,” Catanzariti says.

One of the most significant ancient Egyptian deities, Horus is depicted either as a man with a falcon head, or as a falcon itself, and is seen in jewelry and the kind of relief that is on display, but also in hieroglyphs.

“Common in hieroglyphics, common in sculptures, common in paintings, falcons were really present everywhere in Egyptian culture,” Catanzaniti says, “and they had different meanings according to the use of how they were implemented in art, or used in burial practices, for example, in religious arts, in amulets.”

In the exhibition, a Horus falcon stands on a small shrine-shaped coffin. Qebehsenuef, the falcon-headed son of Horus, is depicted in a glass inlay figure.

“Freer actually collected these pieces while he was traveling in Egypt between 1906 and 1909,” she says, referring to the gallery’s namesake benefactor Charles Lang Freer, whose 8,000-piece collection of Eastern and American art provided the basis of the first art gallery on the National Mall, which opened nearly 100 years ago.

Many of the paintings in the exhibition, however, were purchased with Freer’s endowment following his death. The museum didn’t go out of its way to acquire images of falcons, Farhad says, “We have one of the finest collections in the United States and happen to have images of falcons. It was one way to show the richness of our holdings.”

The history of falconry has uncertain origins. “Whether it started in Iran, or whether it started further west in the Arab world. Most scholars believe that by the 8th century, at the very beginning of Islam we have evidence of falconry becoming part of courtly and royal traditions,” Farhad says. “That’s where we are in firm ground.”

Rulers were traditionally keen on hunting, she says. “When you weren’t on the battlefield, in order to show your skills and hone them, you would be out hunting—and falconry was certainly part of that tradition. And being out in the open, you were visible to your people as you showed off your skills.”

Beyond that, it was just too expensive and time consuming for anyone but royals to take part.

“Falconry is a highly specialized skill,” Farhad says. “It’s quite expensive and very time consuming. Even so today. In order to be able to indulge, or to have falcons or train falcons, you really need to be of a certain social status or have means. Even today, falcons can go for hundreds of thousands of dollars.”

When it works, it creates a bond between trainer and creature that’s different from others.

“A beautiful painting [shows] a young man sitting and reading and there is a falcon perched next to him,” Farhad says. “It is an example of manning, of creating that bond with the falcon and the owner. Bonds can take years and years and years to cultivate.

"And even at the end, when there’s a hunter and he, or she—there are women who now hunt and also hunted in early times—when you let go of the bird of prey, you’re never guaranteed that it will come back. That’s always a challenge. It sets up a very interesting relationship between the owner and the bird of prey, which is in many ways unique. You train a dog, or a horse, it creates a different bond between you and the animal, whereas with the falcon it’s different.”

The bird in the painting she references, in the Indian watercolor A Youth Reading, from about 1630, the falcon is featured prominently, tethered but looking away.

But in some of the other paintings, it may take an eagle eye to find some of the birds of prey depicted.

A falcon as a rejected gift is one of the many scenes in a colorful and highly populated Iranian manuscript folio from 1556 to1565. Even harder to discern at first are a group of hunters and birds tucked in the corner of the Indian watercolor Maharaja Macho Singh Marches to the Hunt, circa 1775.

But once one becomes accustomed to looking for the birds, though, they suddenly seem to appear everywhere. A prominent pair appears, for example, in portraits featured prominently in the exhibition, “Fashioning an Empire: Safavid Textiles from the Museum of Islamic Art, Doha,” in the neighboring Arthur M. Sackler Gallery.

“These birds of prey were very important to the culture at large, so they’ve been represented over and over again,” Farhad says. “If you go upstairs in our Islamic galleries, we have an early ceramic bowl from the late 9th, early 10th century that has a large and very haughty looking falcon right in the center of it.”

It was never the intent to bring all the falcon depictions together in the exhibition, she says. Rather, “it’s a way to lure people from one gallery to another and explore the museum,” she says, “giving little bread crumbs to guide you through the collections.”

“Falcons: The Art of the Hunt” continues at the Freer Gallery of the Smithsonian’s National Museum of Asian Art through July 17, 2022. The Smithsonian Folklife Festival returns this summer from June 22 to 26 and June 30 to July 4, with its salute to the United Arab Emirates.