Poetry infuses Persian culture, from its religious mysticism to its contemporary cinema. The Iranian-born, New York-based photographer and filmmaker Shirin Neshat believes that Iran’s history of censorship turned people to metaphor because it conveys “what we cannot say overtly.” Women, of course, have felt especially restricted.

In Untitled (Women of Allah), one from a series on view in a retrospective opening this month at the Hirshhorn Museum, Neshat inscribed selections from a poem by Forough Farrokhzad, the celebrated female Iranian poet, onto a hand pressed to gently closed lips. The passage compares a woman’s desires to a garden dying in the summer heat. Because traditional Persian society compels women to passivity, a simple gesture can have expressive power, Neshat explains. “The hand, the gaze, the mouth—the things that are allowed to be seen are very poignant.” 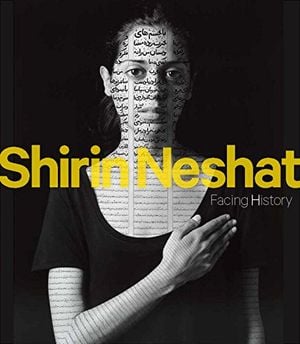 In her mesmerizing films and photographs, Shirin Neshat (Iranian-American, b. 1957, Qazvin) examines the nuances of power and identity in the Islamic world--particularly in her native country of Iran, where she lived until 1975.