How the Crew of the Damaged Apollo 13 Came Home

Using the lunar module as a lifeboat and employing techniques never before considered, the astronauts’ ordeal ended triumphantly 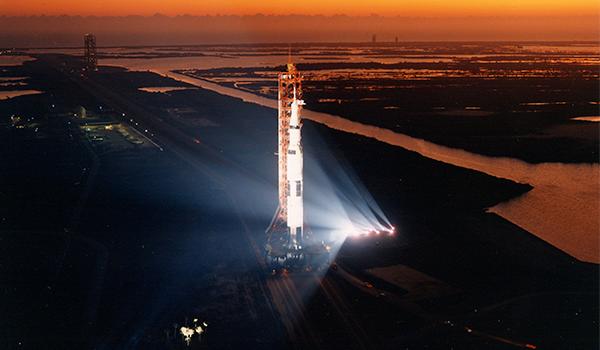 On April 17, 1970, the parachutes carrying the Apollo 13 spacecraft and its crew cleared the clouds and the world breathed a collective sigh of relief.

For most of second week of April in 1970, the whole world watched as the exhausted, underfed and dehydrated Apollo 13 astronauts fought for their lives after an on-board explosion rendered their mission to the Moon unattainable. The heartbeats of earthbound humans quickened listening to broadcasts of the three men as they spoke to Mission Control in their unwavering, matter-of-fact fighter pilot voices. Jim Lovell, Jack Swigert and Fred Haise knew that their chances of returning safely to Earth were poor. For days, they lived in refrigerator-like temperatures with only six ounces of water available for each man per day, and yet, these daring men in their crippled space capsule never gave up.

“It’s one of those stories where they were able to overcome all sorts of odds, and it’s an extraordinary adventure story,” says Smithsonian curator Teasel Muir-Harmony, from the National Air and Space Museum and home of Apollo 13’s command module, now on loan to the Cosmosphere in Hutchinson, Kansas. “It’s hard to believe that they were able to come back from the moon and to continually solve all the different problems that arose . . . . It was just problem after problem after problem.”

Apollo 13 suffered its first unexpected issue two days before liftoff. Command Module Pilot Ken Mattingly was exposed to German measles and grounded. His backup, Swigert, joined the team with little time to work alongside his new crewmates before the mission began. Then, during the liftoff, the center engine of Stage 2 cut off two minutes early. To get the ship into orbit, that stage’s other engines had to burn 34 seconds, while Stage 3 had to fire for nine extra seconds longer. People at Mission Control hoped this would be the mission’s biggest glitch.

However, two days and seven hours later, Apollo 13 suffered a true catastrophe. When the astronauts were about 200,000 miles from Earth, Mission Control asked Swigert to “stir” the cryogenic tanks—a routine task that generated a totally unexpected event: An exposed wire in the second oxygen tank ignited a fire that led to the blast that would rewrite Apollo 13’s mission.

Immediately, alarm lights flared in the command module and at Mission Control. “Nothing remotely like this had ever happened in a simulation,” flight director Gene Kranz wrote later. He looked for help to the men of Mission Control, whose average age was 27. Kranz and his team were determined to bring the astronauts home. “Every person that was in this room lived to flaunt the odds,” he told one interviewer. In this case, they were especially motivated. “Watching and listening to your crew die is something that will impress upon your mind forever.”

At first, some thought that the spacecraft’s instruments might simply be malfunctioning; an idea that would be disproven within minutes. Less than a quarter-hour after the explosion, Lovell saw something frightening outside: “We are venting something out into the—into space. It’s a gas of some sort!” All too soon, it became clear that the gas was oxygen, which produced air and water for the astronauts and power for the engines.

The command module, with its 417 knobs, levers, switches, selectors and buttons, was meant to be the astronauts’ home base during the mission. Nevertheless, after one oxygen tank blew up and caused another to fail, the command module offered minimal supplies of power, water and breathable air. Its only remaining sources of power were three re-entry batteries typically employed only in the flight’s final two hours. Though the problem was diagnosed just minutes after the astronauts heard and felt the explosion, Kranz cursed himself for allowing 15 precious minutes to be wasted on unfounded speculation.

With the men now traveling inside the lunar module, landing on the moon was no longer a possibility, so Mission Control ordered Apollo 13 to swing around the moon and take a return course for Earth. The space travelers would have to make course corrections, but this procedure held the greatest hope for survival. To save power in the lunar module, the temperature had to be lowered to about the level of a meat locker or refrigerator. In the cold, the astronauts reported a loss of appetite and difficulty sleeping.

In addition, rising carbon dioxide levels in the lunar module threatened to poison the astronauts. The currently unused scrubbers in the command module would not connect with the lunar module’s system: They were intended to plug into a square hole, while the lunar module system required a cylindrical hook-up. Using only material available on the spacecraft, Mission Control workers began devising a mechanism that would provide more carbon dioxide buffering. The ultimate solution involved using a piece of cardboard, a plastic bag, a hose from a pressure suit, duct tape and a sock to connect the command module scrubbers. Following instructions from Houston, the astronauts were able to install the new scrubbers and resolve the problem. “Part of what makes it so compelling is how everyone came together and were united around one mission,” Muir-Harmony says.

Relive the Drama of Apollo 13 in Real Time

As the mission neared its end, re-starting the command module for re-entry into Earth’s atmosphere was a challenge never before attempted. Because the command module iced up after powering down, water rained down on the astronauts after they took their seats for re-entry and splashdown. The possibility of a short circuit in the capsule further threatened the crew’s chances of returning safely to Earth.

“There’s one whole side of that spacecraft missing!” Lovell told Mission Control after peering out a window. Based on the rupture’s proximity to the command module’s heatshield, the three astronauts and their colleagues in Houston knew that Apollo 13’s fiery re-entry could destroy the spacecraft—and kill the astronauts if the heatshield had been damaged. Before moving into the re-entry communications blackout, Swigert said a kind of farewell, “I know all of us here want to thank all you guys down there for the very fine job you did!” Lovell seconded his declaration. Then came the static of the ship’s re-entry communications blackout.

The clock in Mission Control counted down the seconds until the moment when the astronauts should be able to report on their status. After the timer reached zero, it continued measuring precious seconds of silence. One minute after the expected communication, the atmosphere in Mission Control became wall-to-wall stress. “A sinking feeling, almost a dread, filled the room,” according to Kranz. At one minute and 28 seconds, an aircraft spotted the capsule. Mission Control reached out again and heard Swigert’s voice.

A later investigation showed that the crew’s technological problems began long before they took flight. A design flaw in the No. 2 tank and mishandling of the equipment, which had originally been assigned to Apollo 10 and later removed to serve Apollo 13, laid the seeds of the spacecraft’s problems. Furthermore, after a pre-flight procedure in which workers tested the oxygen tanks at Kennedy Space Center, there was a problem emptying one tank, so they decided to use an electric heater to “boil off” the rest of the oxygen. It took eight hours to achieve that goal. The process caused significant damage to the electrical systems in the tank, melting away Teflon insulation that protected its inner wiring.

The legacy of Apollo 13 is complicated, says Muir-Harmony. “There was a lot of enthusiasm and pride in how Mission Control and everyone working in the Apollo program was able to bring the astronauts back home.” And yet, the danger of a fatal accident had amplified questions about why additional moon voyages were necessary. NASA had canceled Apollo 20 before Apollo 13 lifted off, and the agency called off Apollo 18 and Apollo 19 after the near-tragedy of Apollo 13. President Richard Nixon was wary of negative voter response to a space disaster, and even some at NASA feared that a more serious accident might adversely affect the agency’s future, Muir-Harmony says.

The mission attracted new attention in 1995 when Ron Howard’s $52 million film, Apollo 13, became a hit and won two Academy Awards. The box office sensation introduced a couple of phrases to American pop culture, and although they seemed factual, both were fictional. The first was: “Houston, we have a problem.” On the big screen, it was Jim Lovell who made this declaration, but in real life, Swigert first said, “Houston, we’ve had a problem,” and Lovell later repeated, “We’ve had a problem.” The film also gave Gene Kranz a memorable moment, saying, “Failure is not an option.” Although Kranz never actually said that, it became so closely tied to his persona that he used the fictional quote as the title of his 2000 memoir.

Read our 2010 article about the white vest Kranz wore during the Apollo 13 mission.

Even more than the film, the actual mission had seized the world’s imagination. Fifty years ago, when the Apollo 13 command module appeared dangling beneath chutes in the skies above the Pacific, millions shared an almost planet-wide sigh of relief. Tears were shed among the steely young men in NASA’s Mission Control, among the families of the astronauts, and in homes and workplaces around the world. “Indeed, for some of the millions,” the New York Times reported, “it was perhaps the single most thrilling moment of the whole space adventure—surpassing even that of Neil A. Armstrong’s first tentative step on the lunar surface.”