Launching his career at a time when modern graphic design was just taking flight, Ivan Chermayeff, who died December 2 at age 85, quickly became one of the field’s most influential voices. Born in London in 1932, he moved to the United States with his family as a teenager. Modern design dwelled in his bones. He was the son of Serge Ivan Chermayeff, the renowned Chechen-born architect and educator. Ivan attended Harvard University and the Institute of Design in Chicago (founded as the New Bauhaus) before attending Yale University School of Art and Architecture. At Yale, he worked with legendary Swiss designer Herbert Matter and American masters Alvin Eisenman and Bradbury Thompson.

In 1957—a few years after graduation—he founded a firm in New York City with his friend and schoolmate Thomas Geismar. Chermayeff & Geismar quickly became one of the nation’s leading design consultancies.

The team created identities for Mobil, Xerox, Pan Am, the Chase Manhattan Bank and other rising giants of corporate America. Chermayeff & Geismar helped forge a sophisticated new approach to business communications within the rising economy of data and services.

In a 1978 opera poster, a jagged piece of cut red paper depicts an explosive burst of baritone. For Winston Churchill: The Wilderness Years, a production of Mobil Masterpiece Theater on PBS, Chermayeff portrayed the oft-depicted statesman in a new way by sandwiching a scribble of white lines between a bowler hat and a lit cigar. Ivan’s crisp, cut-paper style yielded some of the era’s most memorable cultural posters.

The Smithsonian Institution has been a frequent beneficiary of Ivan Chermayeff’s talent and insight. In 1998, he and his colleagues created a comprehensive visual identity system for the Smithsonian.

Here, a simple sunburst symbol and understated typography aim to unify the Institution’s diverse collection of museums and research centers.

For the Smithsonian’s Hirshhorn Museum and Sculpture Garden in 2010, Chermayeff & Geismar created a strong typographic mark that emphasizes the double HH’s in the middle of the museum’s name—creating a bold counterpoint to the Institutional sun. (The Hirshhorn logo functions similarly to Cooper Hewitt’s own proprietary logotype, designed by Pentagram’s Eddie Opara in 2014).

Ivan Chermayeff was at ease with any graphic design problem, from creating a cool, rational solution for a sprawling organization to assembling a playful narrative collage. When Chermayeff was inducted into the Art Directors Club Hall of Fame in 1981, he was quoted as saying, “Design is not art. Design is not terribly significant. Design is not always better than nothing. Design is the solution to problems—real, important or unimportant problems. The problems of design are not designer problems; they are client problems. Design must therefore grow out of a reasonable understanding of those problems, and their goals and aspirations.” Chermayeff earned all the highest honors of his field, including the AIGA Gold Medal and Cooper Hewitt’s 2014 National Design Award for Lifetime Achievement.

In 1970, he created a letterhead and graphic identity for “Cooper-Hewitt Museum of Design.” To mark the museum’s move from our downtown quarters at The Cooper Union to the museum's new uptown location in the Andrew Carnegie Mansion, Ivan placed an architectural blueprint of the Mansion facade on the letterhead, alongside sans-serif type in an asymmetrical arrangement. Printed in a single shade of blue, the letterhead helped give the museum its warm, matter-of-fact voice. While the museum’s graphic identity has changed over the years, our voice has stayed warm.

Chermayeff was a brilliant designer, a gifted artist, and the purveyor of a unique visual language. The Cooper Hewitt National, Smithsonian Design Museum has long regarded Chermayeff as an esteemed colleague and friend. All of us at Cooper Hewitt and the Smithsonian Institution hold dear the memory of this kind and graceful designer, who influenced generations of designers and created unforgettable landmarks in the cultural landscape of our time.

A version of this article originally appeared on the website of the Cooper Hewitt National, Smithsonian Design Museum. 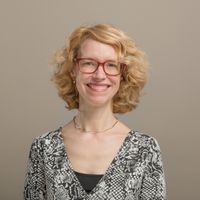 Ellen Lupton is Senior Curator of Contemporary Design at Cooper Hewitt, Smithsonian Design Museum. She is also Director of the Graphic Design MFA program at Maryland Institute College of Art.