Allied pilots were surprised by the aircraft’s speed and armament; but it was a case of too little too late 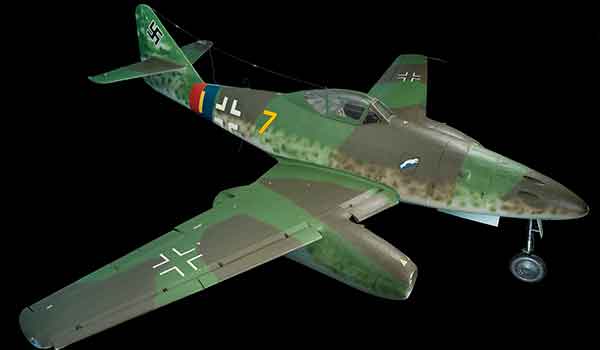 The Messerschmitt Me 262 A-1a Schwalbe, meaning Swallow, held in the Smithsonian's National Air and Space Museum was captured in 1945 by a special U.S. Army Air Force team led by Col. Harold Watson. The Americans and British, who were also developing jet aircraft, used captured Swallows to enhance their own programs. NASM

Stripped down and carrying no weapons to reduce weight and improve speed, the plane flew at about 30,000 feet at more than 400 miles per hour. Few aircraft—German, British, American or otherwise—could keep up with it.

As Wall began his return trip to base in Italy, navigator Albert Lobban noticed an enemy aircraft approaching quickly from the rear. He was puzzled by the interceptor because it had no propellers and left two trails of exhaust behind it.

Wall pushed the throttles of the Mosquito forward all the way and began evasive action. For the next 15 minutes, the RAF crew played a dangerous game of cat and mouse with the much-faster mystery aircraft, which made three attack passes as it zoomed by. Each time, Wall deftly maneuvered his plane to avoid being hit by four 30-mm cannons.

Suddenly, Wall and Lobban heard two loud bangs. As the men prepared to bail out, they opened the cabin door and discovered what had happened: a two-door hatch assembly had blown off the bottom of the plane during the extremely tight G-force turns needed to evade the enemy aircraft. The crew stayed with the Mosquito and managed to make an emergency landing back at the base near Fermo, Italy.

Though the two RAF crewmembers didn’t know it at the time, they had just encountered the latest weapons advancement of Nazi Germany: the Me 262 Swallow. The first operational jet fighter in history had engaged in its first air-to-air combat mission of World War II. Fortunately, the British fliers lived to tell the story.

Built by Messerschmitt, the jet plane was a formidable weapon. With its swept-wing design, it looked unlike any other fighter and was the fastest aircraft of its era. The Swallow was powered by two Juno 004B jet engines and could achieve top speeds in excess of 540 miles per hour—at least 100 miles per hour faster than the era’s premier fighter, the P-51 Mustang.

“The Me 262 was an incredible leap forward in technology,” says Alex Spencer, curator at the Smithsonian’s National Air and Space Museum. “It represents a new beginning in fighter aircraft, so it is historic in that sense. But it had certain drawbacks.”

Despite its great speed advantage, the Me 262 was not as maneuverable as top-of-the-line piston fighters and it had a tendency to stall due to a tricky compressor. The jet engines burned out quickly and were not that reliable. In addition, they also produced a great deal of smoke, leaving a noticeable exhaust trail. This made it easier for Allied pilots to track and then attack as the Swallows were landing—a moment when the German jets were particularly vulnerable.

However, the biggest shortfall was the technology itself. Though the Me 262 was considered a delight to handle by experienced pilots, Luftwaffe airmen had to adjust to a new style of flying. It was so fast that many had difficulty adjusting to this new aircraft. Plus, by the time it was introduced in sufficient numbers at the end of the war, Germany had a serious lack of pilots with the requisite skills to perform in combat.

“Pilots had to learn how to fly again,” Spencer says. “The speed of this aircraft threw their timing off completely. In piston planes, pilots were used to firing at a certain range. With the jets, they were traveling so fast they passed that range very quickly.”

The National Air and Space Museum has an Me 262 in its collections that is slated to go on display at the museum’s Udvar-Hazy Center in Chantilly, Virginia, but no date has yet been announced. The jet was captured in 1945 by a special U.S. Army Air Force team led by Col. Harold Watson. Known as Watson’s Whizzers, this unit was on the lookout for advanced technology to help the American aviation program.

This jet was donated to the Smithsonian in 1950 by the U.S. Air Force. In 1978, the National Air and Space Museum began an extensive restoration project to bring the Me 262 back to the same condition as when it served with the famous JG 7 (Fighter Wing 7), complete with unit insignia and victory markings.

About 1,400 Me 262s were manufactured in the latter stages of World War II. However, it is estimated that only 300 saw combat. By the end of 1944 and through 1945, the Allied assault was so severe that the German jet was incapable of making much of a difference in the war effort.

Still, the Me 262 was a major influence on what was to come. The Americans and British, who were also developing jet aircraft, used captured Swallows to enhance their own programs. Some of the design features incorporated from the Me 262 included the swept wing, wing slots, underslung engine nacelle and heavy cannon armament mounted in the nose.

Like most of the superweapons introduced by the Nazis, the Me 262 Swallow had little impact on the war. Though impressive in design and capabilities, it was an aircraft that was rushed off the drawing board too soon in a desperate attempt to turn the tide of war.

“There is no question that the plane’s performance was absolutely superior to any propeller-driven aircraft of the era by a significant factor,” Spencer said. “It was a really well-armed aircraft and could cause lots of damage to American bombers. Fortunately for the Allies, it was a case of too little too late. The Me 262 was not a significant factor in the outcome of World War II.”