Photographer David Liittschwager slowly snorkeled his way across jagged coral in a shallow lagoon of the island of Mo'ore'a, ten miles from Tahiti. Colorful riots of tropical fish scattered as he approached. Sea anemones bobbed in the current. Liittschwager held a foot-wide cube made from green plastic pipes with open sides. It was a cube of his own invention.

Somewhere in this teeming lagoon he would find exactly the right spot to place his cube. The perfect place where as many species as possible would pass through that single cubic foot in a single day and night.

What if you sifted through every last little organism that lives or passes through a single cubic foot of space in a day? On a coral reef? In a forest? How many species would you find?

This was the question that Liittschwager wanted to answer—and photograph. He came up with the idea of a biocube; his proposed standard for sampling biodiversity. A 12-inch cube that he would set in one place and observe long enough to catalog everything within it. He started on Mo'ore'a, but has since brought his biocube method to many locations around the world.

When hundreds of scientists from around the world had descended on Mo'ore'a to try to document every species that the lush tropical paradise harbored. They spent five years and came up with about 3,500 species in total. But then Liittschwager showed up in 2009 with his first biocube and found 22 more that they had missed—in a single cubic foot of space.

“Yeah, it's actually a lovely little story,” says Liittschwager. “It came out of a conversation between myself and my partner, Suzie Rashkis. Just trying to figure out, if you want to show how much life can occur in a small place, how do you do it? It's an exercise in defining limits.”

He photographed more than 350 unique species from that single cubic foot of space in the lagoon and only stopped because he had run out of time after extending a two-week expedition to a month. “We think it had about a thousand species in it,” he says.

Scientists use many different sampling methods to examine the distribution of life on Earth, but  Liittschwager's approach is unique. By working with Christopher Meyer, a research zoologist at Smithsonian's National Museum of Natural History, he arrived at a method of exploration that serves both art and science while being both dramatically narrow and broad at the same time.

Instead of poking around a large area looking for all of the snails, all of the birds, etc., Liittschwager and Meyer restrict their observations to the cube, photographing, counting and cataloguing every visible life form of any branch of the animal kingdom but only within the limitations of what passes through the single cubic foot within the course of a 24-hour period.

And they still might be missing some of the smallest creatures because microscopes are rarely employed due to the sheer volume of work counting the animals already visible to the naked eye. They have employed their method in locations around the world ranging from South Africa, to Belize, to the National Mall in Washington D.C. Biocubes can be used on land, water or even in the air.

Exact locations for the biocubes are chosen carefully. “If you were an alien looking for life on Earth and this was your one place where you could use it, where would you put it to detect a lot of life forms?” asks Meyer. “But if you were going to do it more statistically, would it be more random? It depends on your goals. David's goal is to capture the most on camera, so we spend time searching for a spot that is going to be astounding.”

The collaborators admit that the size is slightly arbitrary. “One cubic foot came up just because it is a familiar size to Americans,” says Liittschwager, adding that the metric system presented some size issues.

“One cubic meter would be an unmanageable sample size,” he says. The 7.48 gallons of water in a cubic foot is manageable compared to the 220 gallons in a cubic meter. “Seven gallons of water, you can deal with. You can pick it up. In a familiar, recognizable unit of measure.” Surveys of all of a particular category of life in a prescribed area are common. Scientists may index all of the plants or insects within, say, a four-foot circle. But the biocube approach offers the objective of identifying everything.

Liittschwager's photographs are often breathtaking. In many cases, he is probably the first photographer ever to attempt to take an artistic image of his subject species. “He manages to get personality out of these creatures—even a flat worm!” says Meyer. “He puts faces to the names and I put names to the faces. An exhibition, "Life in One Cubic Foot" of Liittschwager's work is on view at the National Museum of Natural History in Washington, D.C. beginning March 4, 2016.

Visitors will see Liittschwager's photographs as well as models of equipment used to set up and analyze biocubes. Videos will demonstrate their processes. 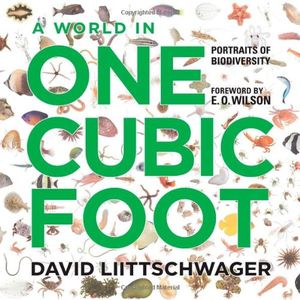 A World in One Cubic Foot: Portraits of Biodiversity

While any wild place probably harbors hundreds of species in a cubic foot, there have been a few disappointments. “A guy had done one in a corn field in the Midwest and only found six species,” says Meyer. Intensive use of herbicides and pesticides deliberately turned the habitat into a wasteland for anything but corn (which may spell trouble for the health of the soil).

“For this exhibit we tried to look around the National Mall to show everyone you don't have to go to these remote tropical places to find biodiversity. . . . so we're on the Mall but everything is so managed here.” Biodiversity was too low to bother photographing.

On the other hand, results weren't so bad in Central Park in New York City. Upstate, they found even higher biodiversity in a river near Rochester. Tennessee's Duck River provided some of the highest biodiversity in North America. You don't need to go all the way to a coral reef or a rainforest to find diversity in one square foot.

Liittschwager and Meyer usually start by observing from a distance (or through a video camera) what easily visible creatures move in and out of a biocube set down on either land or in water—birds, fish, mammals, amphibians. “Vertebrates are very mobile,” says Meyer. Most of them will leave before a sample of soil, coral or bottom substrate from a river can be removed. Examples of those species will be obtained from specialists (like ornithologists who were already banding birds for their own research) to be photographed before their release. Even the diminutive species that remain to be sorted into cups on a table can present enormous challenges as Liittschwager tries to document them.

“I mean you calculate the acceleration, the athleticism of some small creatures, the speed that they can move across the frame [of the camera] far surpasses larger creatures,” says Liittschwager. “A little springtail can move across the frame ten times faster than a cheetah can move. Going one hundred times your body length in a tenth of a second? That's a speed that nothing larger can do.”

Once the collection phase begins, timing becomes essential. The ecosystem doesn't stop working just because it has been transported to a field laboratory. “Usually there's a bunch of cups because you want to get things away from each other so they don't fight,” Meyer says. Many subjects are still trying to eat one another. “On the day that we extract the cubic foot, we know it’s going to be a three- or four-day effort. We know what the different animals need. Are they durable? So you can prioritize which ones need kid gloves and quick attention.” Insects are given a moistened cloth to keep them hydrated. Some crabs, tiny octopuses and aquatic snails may need frequent water changes to keep them healthy.

The biocube methodology may become something more than a vehicle for art. Meyer and the Smithsonian Institution are working to develop an online system for entering, sharing and tracking the contents of biocubes from around the world.

“These are the biological equivalent of weather stations,” Meyer says. “Smithsonian was actually the organization that founded the National Weather Service.” In 1849, Smithsonian began providing weather instruments to telegraph companies to establish an observation network. Reports were sent back to Smithsonian by telegraph, where weather maps were created. “We now have the technology to do the same thing with biological data,” Meyer says. “These biocubes are little biological monitors. In the same way that the Weather Service made this available to the world, we can do the same thing.”

Meanwhile, the Natural History Museum has put together an online experience through Q?rius, an award-winning education program, to encourage teachers, students and curious people of all ages to explore their own biocubes in their own backyards.

“It's really exciting. You never get bored,” says Meyer. Whether your backyard happens to be in Rochester or South Africa. “You're going to see something different every time.”

Instead of future collections at the Museum being based on taxonomic grouping, Meyer envisions building a library of biocube data for future scientists to examine. “We need to re-think how we treat collections. How do we know what past ecosystems looked like? This way we are capturing whole communities. There are big changes on the horizon.”

“Life in One Cubic Foot” is on view at the National Museum of Natural History in Washington, D.C., beginning March 4 and throughout the year. Educators and students can find more information of the Biocube Project at Q?rius.