In the weeks before adding his name to the Declaration of Independence, founding father John Adams posed a perplexing question to a colleague. “It is certain in theory, that the only moral foundation of government is the consent of the people. But to what extent shall we carry this principle?” To put it more bluntly—do we really want to include everyone in the democratic process? Adams didn’t think so.

“It is dangerous to open so fruitful a source of controversy and altercation as would be opened by attempting to alter the qualifications of voters; there will be no end to it. New claims will arise; women will demand the vote; lads from 12 to 21 will think their rights not enough attended to; and every man who has not a farthing, will demand an equal voice with any other, in all acts of state. It tends to confound and destroy all distinctions, and prostrate all ranks to one common level.”

The answer to the question of who to include in the democratic process has changed dramatically since Adams’s time, but those changes have often included violent resistance. In a new exhibition titled “American Democracy: A Great Leap of Faith” the Smithsonian's National Museum of America History hopes visitors will engage with these same ideas, and consider how they have shaped what it means to be part of an ever-changing democracy.

“In that question is the question, how much diversity can the nation sustain to support this democracy?” says curator Harry Rubenstein, one of the organizers of the exhibition. “Democracy means everybody can participate, it means you are sharing power with people you don’t know, don’t understand, might not even like. That’s the bargain. And some people over time have felt very threatened by that notion.”

For Rubenstein, there have been three distinct groups answering this question since the country’s beginning. First are those who believe greater diversity will make for a stronger nation, who want immigrants to come from around the world and retain their cultural identity while also engaging with American values. Then there are the proponents of the “melting pot”: those who accept outsiders, but expect them to conform to certain expectations of being American, be it belonging to a certain religion or speaking a certain language. Finally there are those who oppose any newcomers, who feel threatened by difference. Throughout American history, Rubenstein says, these three groups have been engaged in a philosophical—and sometimes physical—brawl.

“I would say the melting pot idea is probably something most Americans really don’t admit, but probably feel most comfortable with. In the political climate today, you can see the amount of people being threatened by diversity. It’s something that exists,” Rubenstein says. But that doesn’t mean it’s a new phenomenon.

Consider the Ku Klux Klan hood on display in the new show. The KKK arose in the aftermath of the Civil War as a vehicle for white southern resistance to Reconstruction-era policies promoted by Republican politicians from the North. The group terrorized newly emancipated black communities and targeted Republican lawmakers, all in hopes of preventing the overthrow of their society. Although membership ebbed over time, the KKK experienced a surge in membership again in the 1920s during a period of high immigration to the U.S., at which point there were over 4 million members spread across the country. The group was responsible for lynchings, shootings, and other horrific crimes, and overall participation even continues today in 190 active groups.

“Even today, 50 years after the height of the KKK’s civil-rights-era violence, communities where the Klan once thrived exhibit higher rates of violent crime than neighboring areas,” writes sociologist David Cunningham, the author of Klansville, USA.

But African-Americans aren’t the only group who have been targeted for hate crimes and exclusion from participation in democracy. Just look at the anti-Chinese cap pistol also on display in the exhibition, which features the phrase “The Chinese Must Go” and shows a presumably white man kicking a Chinese man. Beginning in the 1850s, Chinese migrants came to the U.S. for jobs in gold mining, agriculture, factories and on railroads. But they faced discrimination all along, receiving lower wages and being forced to acquire special licenses for their businesses. In 1882, Congress passed the Chinese Exclusion Act that prevented Chinese workers from entering the country for 10 years, and required Chinese people already in the U.S. to carry certificates identifying their status.

The act and its subsequent revisions wouldn’t be repealed until 1943, and even in the decades afterwards, racism still plagued the community. In 2012, a Pew Research survey of Chinese Americans found that 72 percent of respondents said discrimination was a problem.

“The anxieties about Asians have never really gone away. Now they’re portrayed as our global competitors,” Ellen Wu told the Washington Post. Wu is the author of The Color of Success, which examines the myth of a model minority for the Asian-American community. 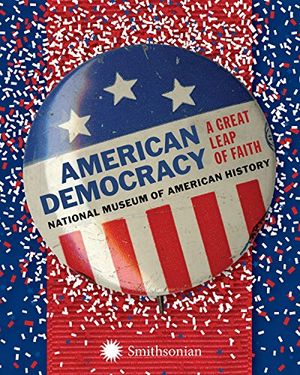 American Democracy: A Great Leap of Faith is the companion volume to an exhibition at the Smithsonian National Museum of American History that celebrates the bold and radical experiment to test a wholly new form of government. Democracy is still a work in progress, but it is at the core of our nation's political, economic, and social life.

And it’s not just anxiety over immigrants and different races or ethnicities that has plagued the citizens of the United States—we’ve also been fearful of each other. Take a final example from the exhibition, this one a bumper sticker with an American flag proclaiming the slogan “America: Love It or Leave It.” The relic of the 1970s reflected a rallying cry of Conservatives, who felt that those protesting the Vietnam War and other policies of the era were threatening the values of the country.

This expansion-contraction battle is ongoing and sometimes frightening, especially when the element of violence is involved (such as when nooses were left on Smithsonian Institution grounds, including one in the National Museum of African American History and Culture). And while there are certainly more people welcome to participate in American public life today than there were at the nation’s start, Rubenstein doesn’t see it as a straightforward arc of progress.

“I don’t think there’s ever been a period in which one of these three viewpoints has disappeared and doesn’t have strong support. That’s the challenge of democracy—how do you work with individuals when you disagree?” Rubenstein says.

It’s a question he doesn’t have an answer to, but he hopes visitors to the museum will ponder it on their own. “We’re hoping people come away with a better understanding of what a democracy is, then find their place in it and want to be engaged.”

The nation’s democratic experiment and other questions of American democracy can be considered in the new permanent exhibition “American Democracy: A Great Leap of Faith” at the Smithsonian's National Museum of American History in Washington, D.C.