Smithsonian photographer Carolyn Russo first found herself drawn to air traffic control towers in 2006 on a flight into LaGuardia when she first studied the architectural details and circular windows of that now inactive structure. Over a span of eight years, often traveling alone and carrying all of her gear, including her 33mm digital camera, she visited 23 countries. Negotiating her way through myriad bureaucratic processes to gain access to restricted areas, she took pictures of hundreds of these towering structures, some built by such renowned architects as Eero Saarinen, César Pelli and Gert Wingårdh. In the preface to her new book, The Art of the Airport Tower (Smithsonian Books, 2015), which features more than 100 of her images, Russo writes:

I viewed each tower as both an essential aviation artifact and a vessel with a powerful presence—watching over the vastness of the airport and sky; a non-judgmental cultural greeter; a choreographer or conductor; a mother bird caring for her flock; an omniscient, intelligent structure keeping humans safe. In the presence of the tower, I sensed the complex orchestration of humans.

With that sentiment in mind, these visible icons of a vast air traffic control system that governs the flights of some 50,000 daily aircraft globally, Russo’s photographs pay homage to their prosaic protective function while highlighting their strange and alluring beauty.

She spoke with Smithsonian.com about her quest to photograph the towers and the exhibition on view at the National Air and Space Museum.

What prompted this idea?

I had been looking at a lot of the work of artist Hiroshi Sugimoto. He did this series of buildings that were out of focus, skyscrapers out of focus, everything as a distortion and refraction. I looked out my plane window at the now-inactive LaGuardia tower, the huge circular, creamy quality of the tower and that’s where the idea sparked.

The Edinburgh tower is. It’s the one that I use on the cover. I had a wish list of those I knew I wanted to include: one was the Dubai tower; also, the one in Sydney, Australia. 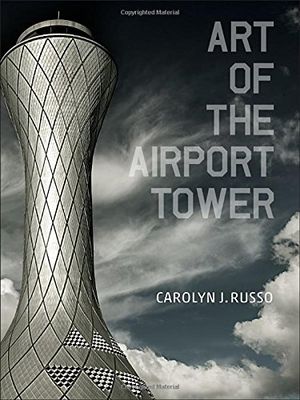 Art of the Airport Tower

Tell me a good story.

Every tower had a story. The Bangkok tower in Thailand: I was going to be in China for a photography festival. So I thought, “Oh God, I should really try to do the Bangkok tower,” because at the time it was the tallest [control] tower in the world. And a four-hour flight away from Thailand doesn’t seem that far away. I wrote and wrote for permission and no one was answering any of my emails and so I was not getting access. But when I was a kid, I had a Thai pen pal. Long story short, I reconnected with him through Facebook because he works for a Thai airline or something like that. He actually put my paperwork in front of the right people and got me official access.

But the funny part of that story is, before going there, I have a friend who travels in Thailand and he said, “Hey stay at this hotel, you have really good access—you have a good view of the tower from the hotel.” Of course I stayed at the hotel.

Funny, I jumped through all these hoops to get access and my hotel had a complete view of the tower. However, I did get official access and I was able to get shots from right underneath the tower and up close.

You were there for the demolition of the Wittman tower in Oshkosh, Wisconsin?

I waited months and months and months. When I finally went out there, it wasn’t a one-day process, so I was there for a couple of days. It was bittersweet because a lot of people from the community—they were used to this tower, this tower was a meeting place for years during the annual air show that they held at Oshkosh. And there was this one couple that said they had had their first date at the tower.

How are inactive airport towers being used?

The Kansas Aviation museum is a former terminal and tower and the Newark administrative building used to be a tower. Yes, a lot of historic ones are turned into office spaces, and that’s always nice to see. Many are put on historic [preservation] records. However, just because something is on a historic record doesn’t naturally mean it will be preserved. They still require a funding source.

Is there an architectural period or a part of the world where you’ve found the towers particularly beautiful or innovative?

In the United Arab Emirates, the Dubai tower there and the Abu Dhabi tower—it’s in the shape of a crescent and to me it looks like a flowing robe. When you see it, it looks like something gliding across the desert.

The ones in Spain are fabulous. At the Barcelona airport, not only do you have their new tower, you have these two towers still standing—it’s great that they haven’t knocked down yet.

I was in Scotland, so I specifically went over to photograph the Edinburgh tower, but on the same property, they had their older tower. And then a car ride away was the very old tower, East Fortune, which is on their aviation museum’s property. Those were like bonuses.

The travel must have been a challenge.

I shot in different seasons in 23 countries. My last tower, in Sweden, I shot in the wintertime, with very little sunlight so that was a challenge. I would plan two big trips or a couple of little trips, so I wasn’t globe trotting constantly. I definitely had my trips planned out and I travelled when time and budget allowed.

How does the exhibition differ from the book?

First of all the book has over a hundred images. For the contemporary towers, I’m really focusing probably on the most abstract views. I threw in a couple of normal looking towers. LAX is a normal one to my eye, but it has a lot of different elements to it. And then I have the historic towers, which were more documentary than abstract. I feel like I photographed the two different types of towers in two different styles. The exhibition differs from the book because it shows just 50 of my photographs. The show was a much tighter edit, in terms of what we chose to display.  For the book, I could have put in 500 pictures, I mean, I could have put in 1,000. It was so hard just getting it down to a hundred pictures.

What was involved in the preparation?

There was a lot that went into each shoot in terms of first researching the towers, finding out who to contact—lots of emails, sometimes it was 10 emails, sometimes it was 40 emails, just the amount of paperwork going back and forth to get permission was interesting.  And then before going out for each shoot, I used to sit down with Google maps and map out the airport. I’d always know sunset and sunrise in terms of trying to figure out what time of day I needed to be there and where I needed to stand. I did love working with airport personnel. They’d pick me up in a truck and I’d get to work out of a their truck. When I wasn’t working out of a truck, first thing I would do was to rent a luggage carrier and put all my junk on it, all my camera stuff, my tripod, and that was always a real luxury for me because I didn’t have to carry my camera equipment, I would just lug it around on a luggage cart.

Are there any other anecdotes from behind the scenes?

I was in the Dubai World Central airport, and I had to go by seven guys with machine guns. That was kind of intimidating.

At another airport, I won’t say which; they said they’d have to review every image I took. I had just kind of showed up on the fly, literally, it was a last minute thing. But it was interesting; they really kind of had their back up when I first got there. But I felt like I was an ambassador for the Smithsonian and I could tell everybody about all of the other towers I was doing, I could tell them about the National Air and Space Museum. I felt like it was really connecting me to the aviation community. And I felt like once they learned about the book and the project, they really wanted to be part of this collective overview of airport towers. So by the time I left, I said you know, “Do you want to check my camera again?” They were totally cool about it. “No, you’re okay.” They were offering me cigarettes; we were talking about home life, kids. . .

Carolyn Russo is a photographer and museum specialist for the National Air and Space Museum in Washington, D.C, where the exhibiiton “Art of the Airport Tower” is on view through November 2016. The accompanying book, published by Smithsonian Books, is available here.