Pauline Cushman, now featured in a Smithsonian photography exhibition, unexpectedly found herself spying for the Union after accepting a dare 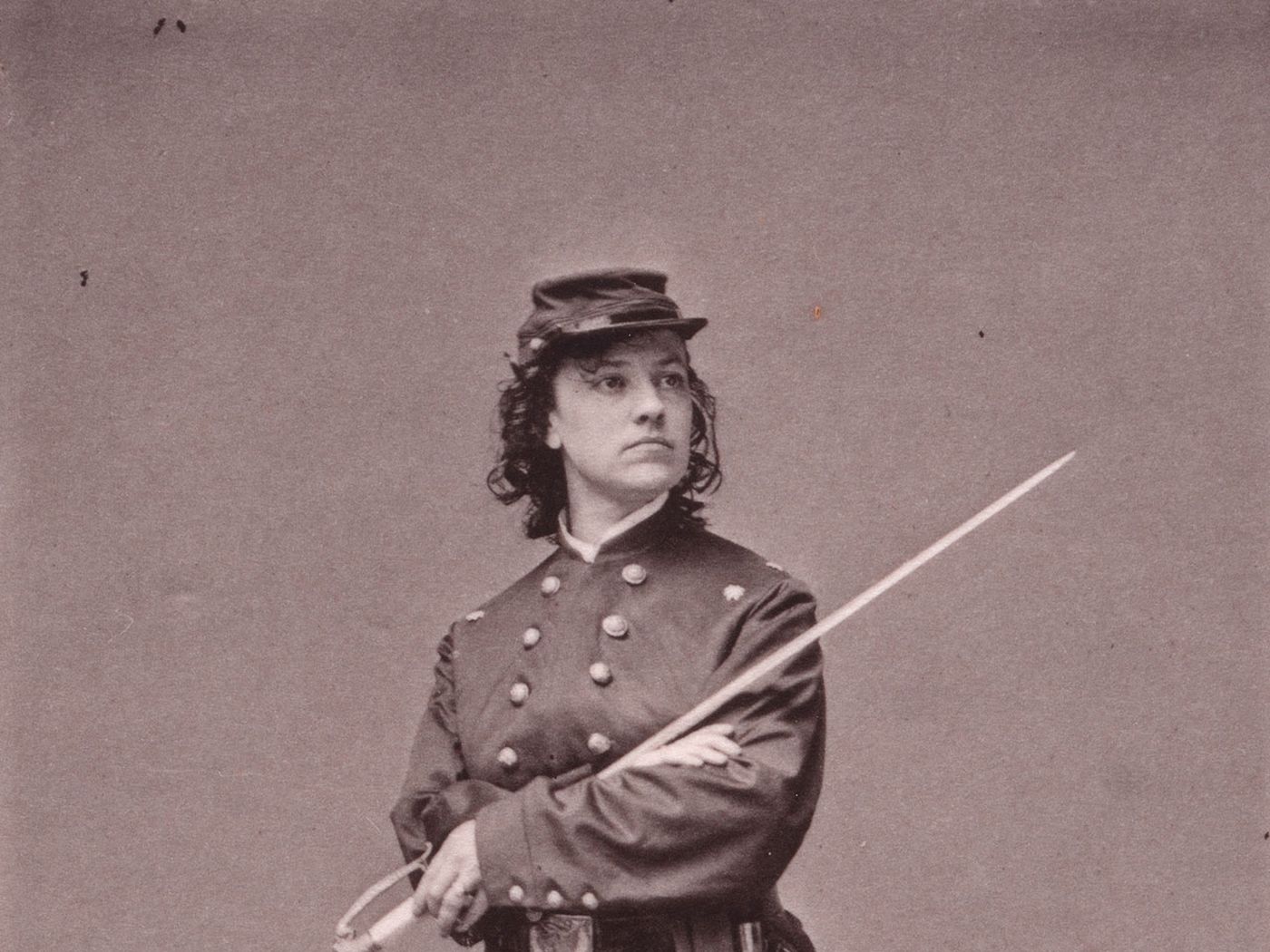 In a photograph no bigger than a playing card, a woman dressed in military costume cradles a sword, staring confidently beyond the frame. Her name is Pauline Cushman, an actress turned Civil War spy whose story dances between the boundary dividing history and fiction.

Born Harriet Wood in 1833, Cushman changed her name when she moved to New York City to pursue acting at age 18. There, she met her first husband, who joined the Union army as a musician, but tragically died in 1862. (Like much of Cushman’s story, the specifics of her husband’s death are unclear, with reported causes varying from dysentery to a head injury). Leaving her two children behind with her in-laws, Cushman relocated to Louisville, a Union-controlled hotbed of contention, to try her hand at acting in Wood’s Theater.

Louisville is where Cushman’s story becomes history, but not as an actress. She was “not necessarily of the first rank,” says the Smithsonian’s Ann Shumard, senior curator of photographs at the National Portrait Gallery. Working as a spy for the Union Army, Louisville is also where the facts of Cushman’s story become entangled with myth as dramatic accounts of her exploits are later romanticized.

“The career of the subject of this work, the beautiful and accomplished Miss Pauline Cushman, or ‘Major’ Cushman, as she is entitled to be called…is one so varied by patriotic incident and stirring adventure, that the ear of young or old can never become satiated by its recital,” states the Life of Pauline Cushman: Celebrated Union Spy and Scout, a biography written by one of Cushman’s acquaintances in 1865. “Since the days of the Maid of Saragossa, no woman has ever lived who has so completely come up to the ideal of a heroine, as Miss Pauline Cushman.”

In a new exhibition, titled “Storied Women of the Civil War Era,” and on view at the National Portrait Gallery, the image of Cushman, dressed in military uniform, is joined by those of 13 other women, with occupations ranging from actresses like Mrs. J.H. Allen, Kate Bateman and Laura Keene, performers like singer Clara Louise Kellogg and pianist Teresa Carreño to First Lady Mary Todd Lincoln and Queen Emma of Hawaii. The show illustrates the variety of spheres that women occupied and influenced during this tense time in America’s past.

“There’s so much history that we’re not always aware of,” says Shumard. “One of the specialties of the Portrait Gallery is using the images in its collections to convey the stories of these fascinating people—some of them very well-known, and others less familiar, but whose stories are certainly worth knowing.”

Shumard hand-picked the subjects from the Frederick Hill Meserve Collection, an archive of more than 5,400 negatives produced in Mathew Brady's studio, which the museum acquired in 1981. The current exhibition displays modern prints that were made from the original negatives, each measuring about 2.5 x 4.5 inches.

Known as cartes de visite, or “calling cards” in French, the small prints gained enormous popularity in the United States during the 1860 presidential election just prior to the start of the Civil War. For the first time, people could acquire multiple images of their own likeness, or those of their friends and family at minimal cost. For only 20 cents per card, one could also buy the portraits of celebrities including theatrical personalities, politicians, or military officers, setting off a card collecting craze that spurred Oliver Wendell Holmes to call these prints the “social currency, the sentimental ‘Green-backs’ of civilization.”

To create a carte de visite, a photographer would insert a glass plate negative into a camera that had four separate lenses, securing a total of eight images if both halves of the plate were exposed. The negatives were turned into prints using paper that was coated with ammonium and fermented egg white, or albumen, and sensitized with silver nitrate. The result was a set of vivid, almost eggplant-toned photographs.

“Of course, in this era there are still a number of women who are principally known to the public because of their careers on the stage,” Shumard explains. Among several actresses, the exhibition displays the photograph of Laura Keene, best known for performing at Ford’s Theatre the night that Abraham Lincoln was shot. Keene, however, also broke boundaries as the first woman to manage a major theater in New York City, and as a result was subject to verbal abuse, vandalism, and the loss of her lease. “But she roared back the next year and was able to open a newly built theater and continued very successfully,” Shumard says. “So, while we might think of her as an actress, there is a richer dimension to her story.”

Cushman’s story is equally rich, although perhaps with muddier details.

As the legend goes, Cushman was set to perform a scene in the play The Seven Sisters in which she proposes a toast. Two rebel officers, Colonel Spear and Captain J. H. Blincoe, offered her money to drink to the Southern Confederacy. After confessing this dare to Union authorities, she was directed to take the bet in order to ingratiate herself with Southern sympathizers and feed information back to the Union.

On the night of her performance, Cushman raised her glass and shouted, “Here’s to Jefferson Davis and the Southern Confederacy. May the South always maintain her honor and her rights!” The audience fell silent, before chaos ensued and Cushman was swiftly fired from the production.

What Cushman lost in roles she gained in Southern approval. According to the 1865 biography, Cushman was embraced by Confederate circles and began spying for the Union, with storied escapades like wearing men’s clothing to intermingle with rebels. One account even reports that she discovered her landlady mixing poison in the coffee of wounded Union soldiers and had her arrested.

Soon after, Cushman moved to Nashville to seek work at a new theater, and was hired by the espionage chief for the commander of the Army of the Cumberland. He asked Cushman to gather information about the confederate General Braxton Bragg, with strict orders not to steal any physical documents. Her alibi was to be that she was searching for her brother, who was a rebel in the Mississippi regiment.

The plot quickly fell apart. While trying to cross back over into Union territory, Cushman was caught with battle plans hidden in the soles of her boots that she had stolen from Bragg’s camp. She was tried in military court and sentenced to death by hanging.

But fate was in Cushman’s favor. After her execution was delayed as a result of her sudden illness, the Union army invaded Shelbyville, Tennessee, where she was being held, and the Confederate forces abandoned her.

Cushman was saved, and soon soared to fame on the nation’s stage.

“She was honored by President Lincoln and given an honorary rank of Major,” says Shumard. “And then P.T. Barnum, who of course was great at capitalizing on any opportunity to exploit fame, enlisted Pauline to appear at his American Museum.” Afterwards, “Miss Major Cushman” (her newly earned nickname) toured the country, giving lectures about her adventures while dressed in a major’s uniform.

Like the cartes de visite of celebrities, Cushman’s story was collected and passed around by the public, thrilling them with tales of risk and patriotic duty. A Nashville Dispatch article from August 1864 reports the arrest of one woman who was particularly inspired: “Fanny Wilson, aged 19 years, and an actress in the Memphis Theatre, was arrested a few days since while attempting to be a soldier…She had heard of major Pauline Cushman and panted for military glory and the romance of a Southern prison.”

Cushman’s notoriety would not last for long. Enthusiasm for wartime stories waned as the country struggled to heal and put itself back together. Cartes de visite, which had been especially popular as mementos for soldiers and their loved ones, also declined in demand as men and women were no longer headed to the battlefield, and a new larger-format print called a cabinet card became the dominant trend.

In 1872, Cushman moved to California in an unsuccessful attempt to rekindle her acting career. She married again and was widowed less than a year later. After working in logging camps in Santa Cruz, she met her third husband and relocated to Arizona to run a hotel. They separated in 1890 after the death of her adopted daughter, forcing her to move back to California, where while suffering from arthritis and rheumatism, she became addicted to pain medication.

Cushman died impoverished and from an opium overdose in 1893 in San Francisco, where she had been working as a seamstress.

She was buried with military honors in the Golden Gate National Cemetery, but her grave is marked with only her name and the label “Union Spy.” At that time, carte de visite portraits were nearing obscurity with the introduction of the Kodak camera in 1888 and the cheaper Brownie camera in 1900, which enabled home photography on an unprecedented scale and reduced the need to visit a professional studio.

“Yes, the deeds of the ‘Scout of Cumberland’…will live as long as American hearts beat, and be related by future historians of our land as the most romantic and most remarkable episode of this fearful rebellion,” Cushman’s 1865 biography prophesized.

Now more than 150 years later, Cushman and the tradition of cartes de visite are preserved behind glass, cast in egg white for contemporary eyes to fall on and to wonder at the stories behind them.

“Storied Women of the Civil War Era,” curated by Ann Shumard, is on view through May 8, 2022 at the Smithsonian’s National Portrait Gallery in Washington, D.C. This exhibition is part of the Smithsonian American Women’s History Initiative, “Because of Her Story.”