SOCOM, the United States Special Operations Command, is building an exoskeleton—a powered set of armor. Known as the Tactical Assault Light Operator Suit (TALOS), the suit is meant for use by U.S. special forces and is designed to “provide operators lighter, more efficient full-body ballistics protection and super-human strength,” says the Department of Defense. “Antennas and computers embedded into the suit will increase the wearer’s situational awareness by providing user-friendly and real-time battlefield information.”

This suit, says Stars and Stripes, is currently in the prototyping and design phase, and is supposed to be out and in working order by 2018. It'll look something like this: 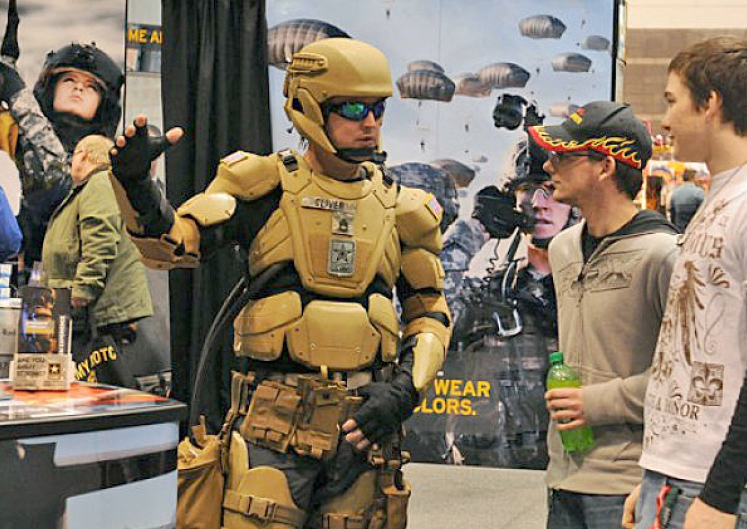 The TALOS battle suit is sort of a scary concept, if you think about it. On the one hand, it will surely do a great job protecting soldiers on the front lines. On the other, supersoldiers.

To get out ahead of any sketchy feelings about the TALOS suit, the military has engaged in a bit of a subtle branding campaign, dubbing TALOS the “Iron Man” suit. Maybe Adm. William McRaven, who heads up SOCOM, is hoping to glean some of Tony Stark's superhero good vibes.

But science fiction is stuffed with stories of characters romping around in battle armor and superpowered exoskeletons. Maybe Iron Man isn't the most appropriate comparison? After all, soldiers wearing TALOS suits will not be able to fly or shoot high-energy beams from their hands.

Star Wars' stormtroopers seem a closer match: no super fancy powers except a nice utility belt. Appearance wise, TALOS looks much closer to a stormtrooper get-up, too. Though, hopefully SOCOM's suit comes without the aim suppressor.

If we're looking for other comparisons, a good place to start is Popular Mechanics' list of the most iconic exoskeletons in science fiction. From Starship Trooper's nuke-toting, rocket-jumping infantry, to Metroid's armadillo-impersonating Power Suit, many of these similarly miss the mark. But there's one that might be a more appropriate comparison for the army's new suit: the Mjolnir Mark V, Master Chief's combat suit from Halo.

...As exciting as an armed Power Loader might seem, a stronger, up-armored soldier, capable of trudging miles through the 100-degree desert without tiring and then jumping into a Humvee without ripping out its suspension, is a more reasonable fantasy.”

​How weapons like drones and powersuits are used in future combat depends, in part, in how they're viewed by the public. And that's why the associations we forge between real tools and beloved science fiction characters matter.