Though there are is an increasing number of women represented in research, the recent round of Nobel Prize winners has highlighted the persistent gender discrepancies in the highest tiers of science. The prestigious awards have come under fire for their exclusion of female recipients in the past, and this year’s all-male lineup for medicine, physics, and chemistry prizes has reignited criticism.

Women have been woefully underrepresented among the list of Nobel winners since the awards began over a century ago—and especially so in science. The Nobel Prizes, named after Swedish chemist Alfred Nobel, are awarded in the fields of physics, chemistry, physiology or medicine, literature, peace, and as of 1968, economic sciences. Though there is only one prize awarded in each category, the honor can go to a maximum of three individuals, based on the rules set by Alfred Nobel. Since the earliest days of the awards, Nobel recipients are overwhelmingly white, male, and American.

Of all 972 Nobel recipients, only 58 women have won the prize. The 118 literature awardees include 16 women, and 17 of the 135 peace prize recipients are women. The Nobel Prize in Physiology or Medicine has gone to 12 women out of the 224 total winners, and the Chemistry Prize includes 7 women of the 188 total laureates. Of the 219 laureates to receive the Nobel Prize in Physics since 1901, just four have been women. Not including this year’s STEM awardees—all of whom were men—women account for three percent of science category winners, but they were almost always awarded jointly with male peers. 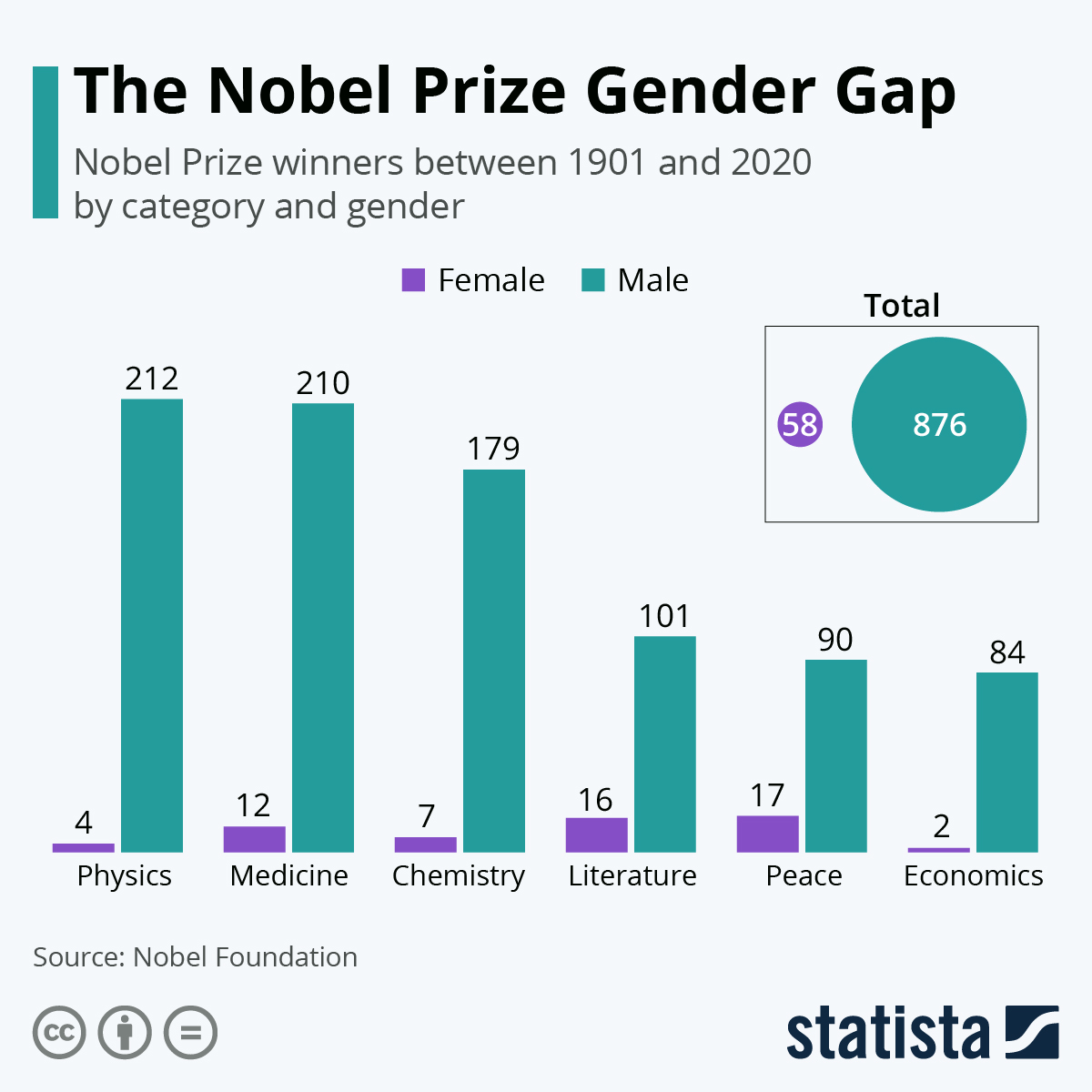 The 2020 Nobels were a comparatively good year for female laureates, who accounted for four of the 11 recipients. When the Nobel Prize in Chemistry was awarded to female scientists Emmanuelle Charpentier and Jennifer A. Doudna, it was the first time that a science award had been given solely to a pair of women since the Nobels began in 1901. The other two prize recipients, poet Louise Glück for literature and astrophysicist Andrea M. Ghez for physics, were just the sixteenth and fourth female winners of their categories, respectively. When women are awarded a Nobel alongside men, they’re likely to get a smaller slice of the prize money as well.

The gap is more severe for people of color: just 16 of the 972 people and organizations who have received Nobels are Black. Never in the Nobel’s 120-year-history has a Black person of any gender been awarded a prize in a science category.

The few women who have managed to secure Nobels in science categories have overcome barriers and sigma in their fields to make some of the most influential discoveries of the past century. The first woman to received a Nobel, Marie Curie, was awarded the physics prize with her husband in 1903 for their study of spontaneous radiation. In 1911, Curie was the sole winner of the chemistry prize for her pioneering work on radioactivity. Only two other women, geneticist Barbara McClintock and chemist Dorothy Crowfoot Hodgkin, have been sole prize-winners. In 2018, Donna Strickland won the Physics prize alongside two men to become the third woman ever to revive the honor.

Since its establishment in 1895, the #NobelPrize has been awarded to less than 60 women.

Unfortunately, the underrepresentation of women Nobel laureates over the years is just another indicator of the slow progress on gender equality. pic.twitter.com/IAtZUJ5Qul

When asked how she felt about being part of an exclusive group of women Strickland said, “Really? Is that all? I thought there might have been more,” to Sarah Kaplan at the Washington Post. “Obviously, we need to celebrate women physicists, because we’re out there. I don’t know what to say. I’m honored to be one of those women.”

Because women have historically occupied fewer positions in academia than men have, one might expect to see fewer female winners. According to the United States Census Bureau, women made up 8 percent of STEM workers in 1970 versus 27 percent in 2019. While women are better-represented in science careers today than a few decades ago, they still face persistent career challenges, receive lower pay, and are awarded fewer prizes than their male peers.

A study published earlier this year analyzed 141 of the top science prizes awarded over the past two decades and found that women are far less likely to win major awards than their male peers regardless of the quantity and quality of their research. In addition to systemic racial and economic barriers that make it more challenging for women and people of color to thrive in STEM fields, a lack of representation in Nobels reaffirms the narrow idea of who scientists are and what they look like. After another year of white male science winners, some are calling on the Nobel committee to increase the diversity of their members and the transparency of their selection system.