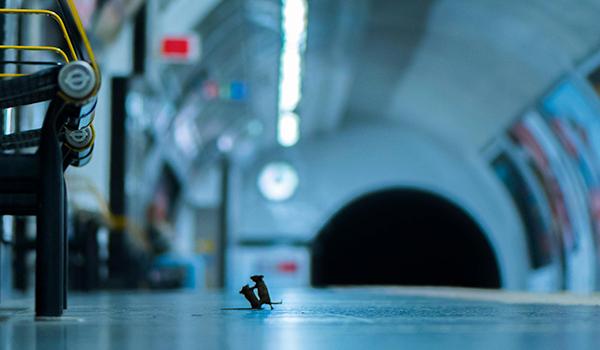 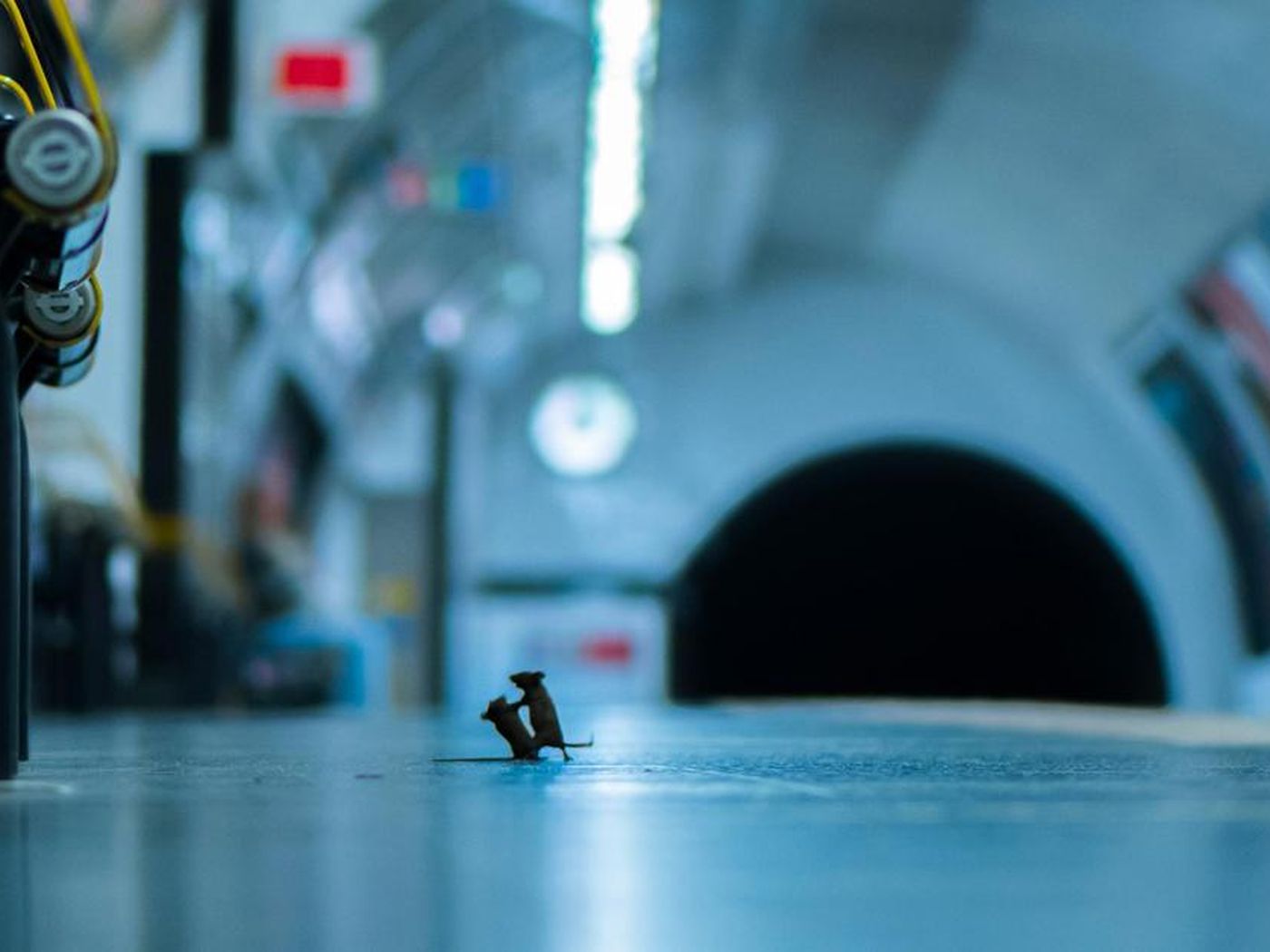 After hours of crouching on the grimy floor of a London tube station, Sam Rowley has been crowned Wildlife Photographer of the Year: LUMIX People’s Choice Award, London’s Natural History Museum announced this week. The competition, which debuted in December, invited the public to play a part in judging a subset of the thousands of snapshots the museum receives each year.

Online voting closed on February 4, prompting the museum to declare this year’s victor: the aptly named Station Squabble, a photo featuring two silhouetted urban mice tussling over a scrap of food. Though no humans are featured, their presence is abundantly apparent in the image’s industrial backdrop, an out-of-focus subway platform set ablaze by artificial lights. Even the rodents’ conflict is person-centric: The morsel that attracted them was once in human hands.

The image offers a rare glimpse into the daily goings-on of a resilient creature that’s become nearly ubiquitous in city environments, provoking everything from disgust to delight amongst those who encounter them.

“With the majority of the world living in urban areas and cities now, you have to tell the story about how people relate to wildlife,” Rowley tells Rob Picheta at CNN. “Wildlife is fantastic and I think we need to appreciate the smaller and supposedly more difficult animals to live with.”

To snap the shot, Rowley spent five nights prostrating himself on the station floor, drawing alarmed looks from passersby—one of whom even jumped on top of him to administer CPR, assuming the photographer was “having a heart attack,” says Rowley in a statement.

Four other photos were listed as “highly commended” in the contest, which asked participants to pick their favorites out of a curated selection of 25 images that didn’t win the museum’s top prizes, announced last October, according to Jonathan Amos at BBC News.

Among them is Aaron Gekoski’s Losing to Fight, an evocative shot of a trained orangutan about to take the stage at Safari World in Bangkok, Thailand. The world-famous tourist attraction has come under international scrutiny for its treatment of animals, including pitting apes against one another in boxing matches and degrading performances. Twice a day, hundreds of people still pay to watch orangutans fight, dance and play the drums.

“Such shows would be incredibly stressful to orangutans, who are gentle and solitary creatures,” wrote Gekoski wrote on Instagram last year, as reported by CNN. “However, until people vote with their feet and don't visit venues that exploit animals in this way, the shows will continue.”

Another notable entry, Matching Outfits, shows a stunning freeze frame of a female jaguar and her cub with a meal of anaconda suspended between them, a la Lady and the Tramp. Captured by Michel Zoghzoghi on the shores of Brazil’s Três Irmãos River, the photo is particularly mesmerizing for its motif of dappled rosettes—a pattern present not just on the big cat duo, but also on the snake that connects them.

Also highlighted is Martin Buzora’s The Surrogate Mother, which captures a tender moment between an orphaned black rhinoceros named Kitui and Lewa Wildlife Conservancy ranger Elias Mugambi. Critically endangered from decades of poaching and habitat loss, black rhinos are considered a global conservation priority as researchers fight to increase their numbers. The intimacy enshrined in Buzora’s shot, taken in northern Kenya, is a reminder that the majestic creatures are more than a statistic.

The final photo honored by the competition, Spot the Reindeer by Francis De Andrés, engages viewers by staring right back. Swaddled in a snowy landscape, eight pearly-flanked arctic reindeer flick their black eyes over the frozen archipelago of Svalbard. In this extreme environment, where temperatures can dip below 0 degrees Fahrenheit, the photo’s seamless composition hints at how millennia of evolution have tailored species to survive in their own unique environments—many of which are now under dire threat from climate change.

Currently in its 56th year, the Wildlife Photographer of the Year competition is now in the midst of another round of judging by an expert panel, with the next grand prize set to be unveiled in October. The top five LUMIX People’s Choice Award images, along with 20 other shortlisted entries, will be on display alongside 100 photos from the main contest at the Natural History Museum until May 31.

Katherine J. Wu is a Boston-based science journalist and Story Collider senior producer whose work has appeared in National Geographic, Undark magazine, Popular Science and more. She holds a Ph.D. in Microbiology and Immunobiology from Harvard University, and was Smithsonian magazine's 2018 AAAS Mass Media Fellow.