Update, July 11, 2017: Since the documentary was aired, military history blogger Kota Yamano has discovered the undated photograph allegedly of Amelia Earhart published in a travel book dated two years before the aviator's ill-fated 1937 mission. Read the full story over at Yamano's blog here.


The fate of Amelia Earhart, the famed aviator who vanished without a trace while attempting to circumnavigate the globe, is one of the greatest mysteries of the 20th century. Most experts believe that Earhart plummeted into the Pacific Ocean in 1937 after failing to locate a refuelling station on Howland Island, a tiny speck of land just north of the equator. But as Tom Costello and Daniel Arkin report for NBC News, a new History Channel special claims to have unearthed evidence to support a different theory, which posits that Earhart crashed onto the Marshall Islands and was captured—alive—by the Japanese.

The special, titled Amelia Earhart: The Lost Evidence, focuses on a decades-old photo that was found in the National Archives by retired federal agent Les Kinney. According to Sarah Pruitt of History.com, the photograph was marked with the stamp of the Office of Naval Intelligence and labeled “Marshall Islands, Jaluit Atoll, Jaluit Island, Jaluit Harbor.” The photo shows a group of people milling on a dock, one of whom sits on the ground with his or her profile facing the camera. That person, according to the documentary, is Earhart.

To reach that conclusion, History consulted two independent forensic analysts, who both identified the missing pilot in the photograph. The experts also noted that one of the other figures has a distinctive hairline resembling that of Fred Noonan, the navigator who accompanied Earhart on her ill-fated journey.  Additionally, as Costello and Arkin report, the photo seems to show the “Japanese ship, Koshu, towing a barge with something that appears to be 38-feet-long—the same length as Earhart's plane.”

The investigative team behind the special consequently theorizes that the photo was snapped shortly after Earhart crashed her plane onto the Marshall Islands, meaning that she had flown far off course from her intended destination of Howland Island. The identity of the photographer is unknown, but History’s experts seem certain about the photo’s subjects. Kent Gibson, one of the forensic analysts featured in the program, says it is “very likely” that the photograph depicts Earhart and Noonan, according to Pruitt.

Dorothy Cochrane, a curator at the aeronautics department at the National Air and Space Museum, isn’t so sure. “I can't really comment definitively on the photograph, and I don't think [History investigators] can either,” she says, noting that the image is “kind of a blurry photograph.”

More convincing evidence, Cochrane says, points to Earhart getting close to Howland Island before her disappearance. The pilot put in a number of radio calls to the U.S. Coast Guard cutter Itasca, which was stationed near the island, and the signals were “very strong,” according to Cochrane.

“We really have to be sure of what we're saying is evidence, and saying what is real,” she adds. “We have to go with what we see the facts are, and that's what the Coast Guard reported.”

But Cochrane stopped short of dismissing History’s findings outright, saying that the photograph adds “another layer, another page in the search for Amelia, and especially in this particular theory.”

The idea that Earhart may have crash-landed on the Marshall Islands first gained traction in the 1960s, after CBS correspondent Fred Goerner published an investigative work titled The Search for Amelia Earhart. According to Kirstin Fawcett of Mental Floss, the book claimed that Earhart and Noonan were captured by the Japanese, who had been extending their influence into the Pacific, and died as prisoners on the island of Saipan. Some have posited that Earhart was in fact a spy, sent by the U.S. government to conduct surveillance on Japanese activity in the Pacific.

Other theories have proliferated in the 80 years since Earhart’s disappearance, which continues to be a point of fascination for both expert and amateur sleuths. Just last month, The International Group for Historic Aircraft Recovery (TIGHAR) brought a team of forensic dogs to the uninhabited Nikumaroro Island, hoping to find evidence that Earhart and Noonan landed there.

Despite such fervent efforts to unlock the mystery of Earhart’s fate, no confirmed trace of the pilot, Noonan, or their Lockheed Electra plane have ever been found. Cochrane understands the impulse to continue to search for answers. “[Earhart] was a very famous person who literally disappeared off the face of the Earth,” she says. “We all would like to know, ultimately, what happened to her.” 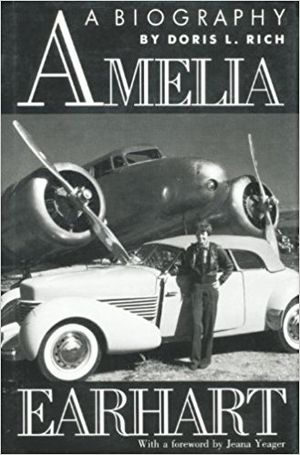 Doris L. Rich's exhaustively researched biography downplays the “What Happened to Amelia Earhart?” myth by disclosing who Amelia Earhart really was: a woman of three centuries, born in the nineteenth, pioneering in the twentieth, and advocating ideals and dreams relevant to the twenty-first.