See Birds Dive, Splash and Play in These Prize-Winning Photos 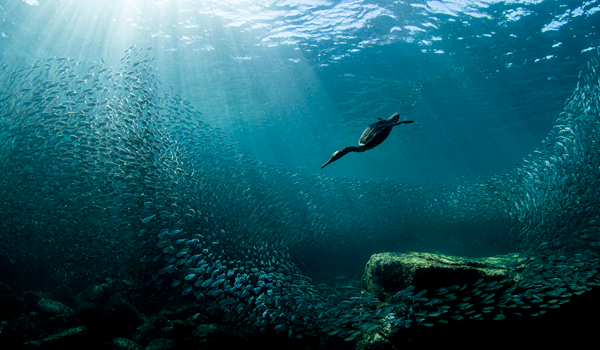 To select the winners of this year’s Audubon Photography Awards, judges sorted through more than 6,000 images of sandpipers, ravens, albatrosses, woodpeckers and other avian creatures—a task both “unenviable and inspiring,” they write in a statement. The panel ultimately settled on 6 winners, 4 honorable mentions and 100 additional top-tier picks. Showcasing birds of all species in funny, surprising and spectacular ways, selections range from a roadrunner feasting on a cobalt-striped lizard to a curious cohort of burrowing owls. Nearly 1,800 youth, amateur and professional photographers from the United States and Canada submitted photos to this year’s contest, per the statement.

Andrew Lee snapped this fortuitous shot of a burrowing owl mother and her owlets peering in the same direction in Ontario, Canada. He says he’d been tracking the family for days when “suddenly, they all turned and looked toward me, and I quickly snapped an image of the precious moment.”

Piping plovers, like this one photographed in the Parker River National Wildlife Refuge in Ipswich, Massachusetts, are small birds that scamper along the shoreline. Babies are capable of leaving the nest just a few hours after hatching but often remain with their parents for a few days, according to the Cornell Lab of Ornithology. Here, Matt Filosa captures a snapshot of a parent and child caught off guard—and looking a bit disheveled.

“While watching this behavior, I noticed there’s sometimes a bit of chaos when the parent decides they’ve had enough,” says Filosa. “I wanted to try and capture that moment, and I especially like this shot—it reminds me of a busy parent dropping off the kids at school.”

Joanna Lentini took home this year’s Grand Prize for her snapshot of a double-crested cormorant diving headlong into blue waters and a cloud of sardines. Lentini had been photographing a California sea lion rookery in the bay of La Paz, Mexico, when the diving birds caught her attention.

“I watched in awe as the cormorants plunged beak-first into the sea to snap at the sardines swimming by,” she says. “Although I spent a long time admiring these birds, I didn’t see a single one catch a fish. Adding insult to injury, curious sea lion pups would zip by the hunting birds and nip at them from behind.”

Christopher Smith heard this bird before seeing it.

“I heard a roadrunner cooing to its mate,” he recalls. “I followed the sound to find the bird clutching a gift for its partner: a really big fence lizard!”

The photographer, who was walking through the San Joaquin River Parkway in Fresno, California, when he took the picture, earned an honorable mention in the youth category for this shot, which features the impressive greater roadrunner clutching the blue-striped lizard in its beak. According to Audobon.org, male roadrunners often give potential mates gifts ranging from snacks to nesting material during courtship.

Other times, males will “go through the motions of bestowing a gift with nothing at all. Apparently, it’s the thought that counts.”

Gail Bisson came face-to-face with a bare-throated tiger heron on the banks of the Tárcoles River, Costa Rica, right after a torrential rainstorm.

“I raised my camera and quickly switched to a portrait orientation to capture the beautiful post-storm sky behind it,” she says.

Travis Bonovsky earned top honors in the “Plants for Birds” category, an award introduced in 2019 for images that highlight the relationship between native plants and birds. As Adam Cohen wrote for Smithsonian magazine last year, native plants provide crucial support for the insect populations that native birds feed on to survive.

In this shot, an American goldfinch in Minneapolis, Minnesota, dips her beak into the bowl of the cup flower, a native plant species that collects rainwater in its uniquely shaped leaves, creating a kind of watering hole for the brightly colored birds.

A tree swallow in Fredericksburg, Virginia, popped her head out of her tree nest just long enough for Edward Episcopo to snap this picture.

Episcopo says he sat and waited for the right moment to click the shutter after noticing a male swallow carrying goose feathers to the hole.

“After half an hour, the female swallow peeked out of the hole and cocked her head, as if wondering what was taking so long,” he adds.

Jocelyn Anderson captured this unlikely family arrangement at Kensington Metropark in Milford, Michigan. Last spring, a Canada goose laid her eggs in a sandhill crane’s nest but was chased away before her eggs hatched, as Amelia Langas reported for Audubon magazine at the time. The cranes seemed to have “adopted” the newly hatched gosling and raised it alongside their own colt.

“While this is not the ending we hoped for, this family brought smiles to many and captured hearts with its unconditional love,” the photographer wrote on Twitter in July 2019.

This stunning composition of a northern jacana peering into a white water lily earned Vayun Tiwari the top prize in the youth category. Tiwari spotted the bird and its distinctive orange head markings while on a boat ride along the New River in Belize.

“I couldn’t believe my luck,” he says.

Marlee Fuller-Morris earned the Fisher Prize—an award that recognizes “an image that is as artistic as it is revealing,” per the statement—for her photo of an American dipper in Yosemite National Park. The petite bird is pictured at the very moment it splashed its head into a river’s surface in search of food.

“The bird kept getting closer and closer as I sat snapping ­hundreds of shots of that splash,” recounts Fuller-Morris.

The clear water, captured as it splashes in a dramatic arc around the bird’s body, conveys the excitement of the moment.

Bibek Gosh snapped this shot of an Anna’s hummingbird engaged in a peculiar activity around a water fountain near Fremont, California.

“It swooped in for a drink and then stuck around to play in the water, as if trying to catch a droplet,” he says. “After several frames, I finally captured the bird succeeding at its game.”