In 1883, the great artist Pierre-August Renoir painted an impressionistic oil-on-canvas portrait of Valentine Clapisson, the wife of stockbroker Léon Clapisson. The painting, above, shows Mme. Clapisson dressed in a gown, “set against an abstract background that picks up the reds from her chair, blues from her dress, and yellows from her gloves,” says the Art Institute of Chicago. As it turns out, the background of Renoir's painting didn't just allude to the red chair: as Renoir originally painted it, the background was a fiery deep red, a mix of blues and pinks that changes the whole tone of the work.

Over time, Renoir's red paint has broken down and degraded. But a team including Richard Van Duyne, a chemist at Northwestern University, used a technique called Raman spectroscopy to analyze the painting, reconstructing the original from the traces of the decayed paint, says Chemistry World. 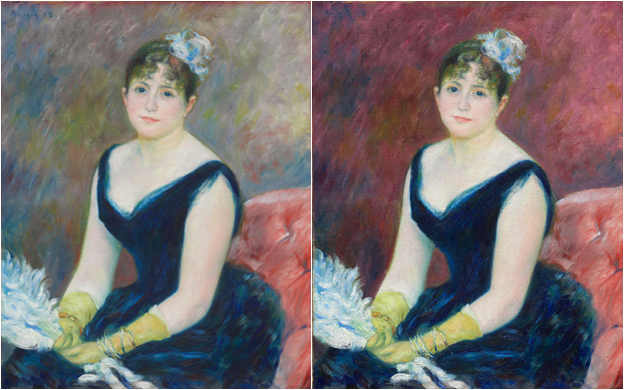 Art Institute of Chicago via BBC
Unlike many paints, which are made using colors derived from metals or minerals, Renoir's red paint got its hue from an organic compound extracted from bugs, specifically, Dactylopius coccus, a type of cochineal. “These dyes are based on the highly light-sensitive molecule anthroquinone, so over the years the strong red colour disappeared from exposed parts of the painting,” says Chemistry World.

That the color faded, though, would not have been a surprise to Renoir, says the Art Institute of Chicago's Francesca Casadio to the BBC.

"The manuals from 19th Century were already warning artists that carmine lake was a 'fugitive pigment'; it wasn't a permanent colour. And yet, the artists clearly loved it because they continued to use it over and over again even though they had more stable options available to them," Dr Casadio explained.