The Women Behind the Pre-Raphaelite Brotherhood 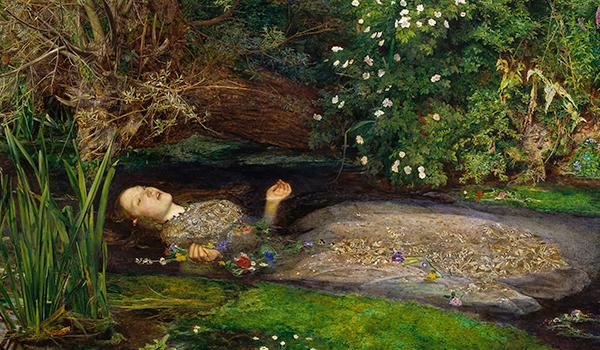 The women of the Pre-Raphaelite sisterhood have gone down in history as muses. Despite being artists in their own right, they are remembered as symbols, rather than creators, of beauty. Now, an ongoing exhibition at the National Portrait Gallery in London gives these long-overlooked figures a space of their own, sharing their stories through works of art, poems and embroidery.

On view through January 26, “Pre-Raphaelite Sisters” centers on 12 women—among others, the roster includes Christina Rossetti, Effie Millais and Elizabeth Siddal—and their contributions to the male-dominated narrative of the Pre-Raphaelite Brotherhood, a circle of artists active between 1850 and 1900. The show draws on unseen works from both public and private collections around the world to reshape perceptions of these individuals as creative artists and poets who advocated for their own stories to be told rather than simply objectified muses.

“Visitors see these women’s own art, and their roles as collaborators and business partners, not just as lovers and wives,” writes the Atlantic’s Helen Lewis. “The captions restore names to the faces gazing placidly from postcards and posters.”

In 1848, then-students Dante Gabriel Rossetti, William Holman Hunt and John Everett Millais founded the Pre-Raphaelite Brotherhood in opposition to the more traditional art espoused by the Royal Academy. The original founders, all of whom were under the age of 25, soon invited four other male painters, sculptors and critics to join their secret society. Members heavily rejected the Academy’s promotion of Renaissance master Raphael, as well as the genre painting popular at the time.

Per Encyclopedia Britannica, the Brotherhood’s work focused on religious and medieval themes. Painted with maximum realism inspired by 15th-century Florentine and Sienese paintings, the young artists’ naturalistic creations were populated by beautiful women. The cryptic initials “PRB” appeared in the bottom corner of early Pre-Raphaelite works.

Simply put, the Brotherhood was a boys’ club that intentionally excluded women.

“Though its goals were ‘serious and heartfelt,’” explains Dinah Roe, a senior lecturer at Oxford Brookes University, for the British Library, “the PRB was founded in a spirit of waggish male camaraderie which expressed itself in pranks, late-night smoking sessions and midnight jaunts around London’s streets and pleasure gardens.”

The Brotherhood’s models, who often doubled as the artists’ lovers, were usually at the center of their creations. But some, like Siddal, used their seemingly passive roles as models to fund their own artistic careers alongside their elite husbands.

Siddal is among the Pre-Raphaelite women painted over by history. She started modeling not to gain the attention of men, but to fund her own artistic practice. Initially working part time at her parents’ hat shop while modeling on the side, Siddal gained an unprecedented amount of popularity in the Pre-Raphaelite circle, with her likeness becoming a symbol of feminine beauty.

Lying motionless, with her pale, delicate face encircled by a fiery halo of red hair, Siddal is the subject of one of the movement’s most famous paintings, Millais’ Ophelia. Following the success of this piece, Siddal became perhaps the face of the Pre-Raphaelite movement. She later married artist and Brotherhood member Dante Gabriel Rossetti, who drew and painted her “thousands” of times, according to the BBC’s Lucinda Hawksley.

Siddal’s own artistic journey was far more extensive than previously believed. As seen in the exhibition, she created paintings with archetypal Pre-Raphaelite qualities, including detailed medieval scenes and precise figures. She wrote haunting poetry, drawing on her experiences with drug addiction, an unfaithful husband and a stillborn daughter, but didn’t live to see them in print; the verses were only published after her death in 1862.

“Far from passive mannequins, […] these women actively helped form the Pre-Raphaelite movement as we know it,” says curator Jan Marsh in a statement. “It is time to acknowledge their agency and explore their contributions.”

The exhibit, described by Lewis as “revelatory,” includes more examples of the Brotherhood’s depictions of its 12 subjects than works by the women artists themselves. This dynamic offers visitors a sharp contrast—one can see the Brotherhood’s interpretation of the models next to works that envision them as more than muses.

The Pre-Raphaelite sister who perhaps best exemplifies this dichotomy is Jane Morris. With her full lips and strong features, Morris caught the attention of several Pre-Raphaelite men eager to capture her beauty through art. Yet it was a portrait drawn by another woman, Evelyn De Morgan, in 1904, that depicted a more authentic version of Morris’ feminine beauty by showing her signature raven-colored hair turning grey with age.

In many ways, the work completed by these women can be seen as a rare act of feminism for the time period. By shedding light on these objectified women, “Pre-Raphaelite Sisters” gives visitors the opportunity to gain a holistic view of the groundbreaking sisterhood.

“It is not sufficient to merely add some women to the Pre-Raphaelite canon,” writes Elizabeth Prettejohn in The Art of the Pre-Raphaelites. “Instead, it is a matter of writing a wholly new, and different, story about Pre-Raphaelitism—a story in which the activities of women are no longer incidental, but necessary to the plot.”

“Pre-Raphaelite Sisters” is on view at the National Gallery in London through January 26.