The first Smokey Bear poster shows a brown-coated bear wearing jeans. He's peering shyly up from under a campaign hat as he pours a bucket of water over a campfire."SMOKEY SAYS," the poster reads, "Care will prevent 9 out of 10 forest fires!"

Albert Staehle, the illustrator, might have chosen a bear (over the suggested raccoon) because he wanted Smokey to look like the father of the forest, as his wife later recalled. But many will forever associate the cartoon with a real bear cub, whose paws and belly were singed in a 1950 spring wildfire.

In a new biography—"Smokey Bear: The Cub Who Left His Pawprints on History"—the "real" Smokey is getting a proper tribute, reports the Sun-Sentinel. The book's author, Karen Signell, first met Smokey when he was a cub, living at the National Zoo in Washington, D.C.

The cub had been rescued by a game warden, Ray Bell, fighting a fire in New Mexico’s Capitan mountains. Don Bell was 15 when his father came home with the five-pound bear. The Sun Sentinel's Brittany Shammas reports:

The Bell family was constantly taking in wild animals, so Don Bell didn't think much of the "cute little guy" who slept in a rabbit cage on the back porch. But the story of the rescued cub would become a national phenomenon. Smokey's arrival at the capital airport drew hundreds of reporters, photographers and onlookers, and he appeared in newspapers across the country.

At the zoo, Smokey drew millions of visitors during his 26 years in residence. Having a living animal symbol helped make the wildfire-safety campaign more visible, Signell writes in Smokey's biography. The Smokey ads were also a far better choice, at least to modern eyes, than the racial caricatures that populated the previous campaign. (The obsession with forest fire prevention kicked off during World War II after a Japanese submarine fired shells into an oil field in Southern California, very close to Los Padres National Forest.)

Signell visited the cub not long after he reached the zoo, and she writes Smokey’s story from his perspective. Don Bell told the Sun-Sentinel he feared it might be "hokey" but that "[a]fter she got it all put together and everything and finished it up, I read it and I think she did a pretty damn good job."

On her site, Signell writes:

I thought of the book as a fictionalized historical biography. And, from the beginning, I wrote it mainly for adults, but also youngsters. I chose to write the novel from the bear’s point of view (but in the third person), in my respect for the wild animal’s intelligence and my empathy for his emotions. It was not easy to write this way. I had to imagine how he smelled his world, what sounds he made... But I was greatly helped by naturalists’ books with vivid descriptions of cubs and bears they knew well.

Other famous National Zoo residents during Smokey’s life also make appearances in the novel. Expect to hear about the Ling-Ling and Hsing-Hsing, the two Giant Panda gifted from China after President Richard Nixon’s 1972 visit and space-chimp Ham’s retirement. 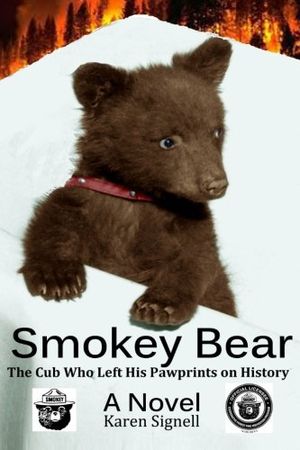 Smokey Bear: The Cub Who Left his Pawprints on History