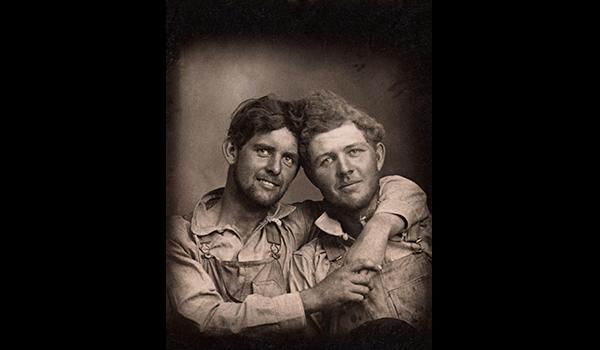 This photo, like some others in the collection, was taken in a photo booth, eliminating the need for a photographer. Courtesy of the Nini-Treadwell Collection © “Loving" by 5 Continents Editions

When Texas couple Hugh Nini and Neal Treadwell stumbled onto a 1920s-era photograph in a Dallas antiques shop some 20 years ago, they were startled to see a relationship that looked much like theirs: two men, embracing and clearly in love.

As Dee Swann writes for the Washington Post, the image spoke to the couple about the history of love between men.

“The open expression of the love that they shared also revealed a moment of determination,” Nini and Treadwell tell the Post. “Taking such a photo, during a time when they would have been less understood than they would be today, was not without risk. We were intrigued that a photo like this could have survived into the [21st] century. Who were they?”

In the decades that followed this initial discovery, the pair came across more than 2,800 photos of men in love—at first accidentally and later on purpose. The result of their trips to flea markets, shops, estate sales and family archives across Europe, Canada and the United States is a tome titled Loving: A Photographic History of Men in Love 1850s to 1950s. Featuring around 300 photos spanning more than a century, the volume is available through Italian publisher 5 Continents Editions.

According to Vice’s Vincenzo Ligresti, Nini and Treadwell gradually developed ideas about recurring motifs in the photos. They suggest that between the 1880s and 1920s, posing under an umbrella symbolized a romantic union. Over time, the couple posits, jewelry like wedding rings and bracelets became more popular, peaking among sailors and soldiers during World War II.

Some of the earliest images in the collection are daguerreotypes, the first popular type of photographs, which were commonly used to create portraits in the mid-19th century. Others are glass negatives, tin types and photo postcards.

Vice notes that some of the pictures were taken in photo booths, which first appeared in the U.S. in 1924. These devices allowed couples to capture their likenesses without exposing their relationship to anyone else. Other images in the collection were apparently taken by friends and family. In some cases, outside individuals appear alongside the couples, reflecting the fact that their relationships weren’t kept secret from everyone.

Jerry Portwood of Rolling Stone notes that some readers may question whether all the pictures really reflect same-sex romantic relationships.

“You may scoff and think: Maybe it’s just guys horsing around (despite the kissing and legs wrapped around in intimate bedroom or picnic scenes) or that we’re unfairly placing our contemporary notions upon innocent, youthful friendships,” he writes.

But, Portwood adds, this is something the collectors have considered. Nini and Treadwell acknowledge the existence of historical “friendship photos” that might look romantic to modern eyes. But they developed rules to exclude pictures depicting platonic relationships.

“We look into their eyes,” the couple writes in the book. “There is an unmistakable look that two people have when they are in love. You can’t manufacture it. And if you’re experiencing it, you can’t hide it.”

When Nini and Treadwell found that first photo for the collection, they were unofficially married. At the time, they couldn’t get legally married anywhere in the country. In 2006, reports Vice, they married in Massachusetts—the first state to legalize same-sex marriage.

Tremendous changes in U.S. culture’s attitude toward LGBTQ people has taken place in the years since the couple’s initial discovery—and even more since the last of the photos in the collection were taken in the 1950s. Yet some readers say the photo book provides a sense of the continuity in men’s same-sex romances over the past 170 years.

“Flipping through the book, it wasn’t that I felt that I learned a great deal about being LGBTQ, but what gave me comfort was the feeling that we’re not going anywhere,” writes Hrag Vartanian for Hyperallergic. “Seeing ourselves in the past is as much about being certain of our present and, dare I say, our future. When we see them as connected, we feel more whole, and that’s what love is about for many of us anyway.”

Editor’s Note, October 29, 2020: This article previously stated that Loving featured 2,800 images from Nini and Treadwell’s collection. The collection as a whole contains more than 2,800 images, but just 300 or so are included in the book.