Closed due to COVID-19, the Museum Hotel Antakya looks forward to welcoming guests with its blend of luxury and history once restrictions are lifted 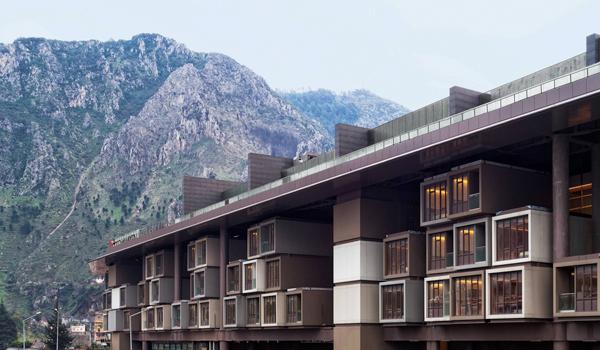 In 2009, the Asfuroğlu family began constructing what was supposed to be a new luxury hotel in Antakya, Turkey. But when workers broke ground, they discovered ancient ruins from Antioch, an important Roman city that once stood near the center of modern Antakya, reports Maureen O’Hare for CNN.

Many developers would have abandoned the project then and there. But the family decided to preserve the archaeological treasures by integrating them into the luxury hotel.

Eleven years later, the 200-room Museum Hotel Antakya finally opened its doors—only to be shuttered shortly thereafter by the novel coronavirus pandemic. The hotel is accepting bookings for June onward but will remain closed until restrictions on travel and nonessential businesses are lifted.

To achieve the lofty goal of constructing a luxury hotel atop priceless artifacts, the Asfuroğlu family collaborated with the Antakya Municipality, the Hatay Archaeology Museum, and the Adana Conservation Council for Cultural and Natural Assets to conduct the largest archaeological excavation in Turkey since the 1930s.

A team of 200, including 35 archaeologists and five restorers, worked for 18 months to complete the excavation and restoration, according to Architectural Digest.

The team’s work yielded superlative finds, including the world’s largest single-piece floor mosaic (more than 11,000 square feet) and the first intact marble statue of the Greek god Eros. All told, the researchers unearthed 35,000 artifacts representing 13 civilizations dating back to the third century B.C.

Enumerating the precious artifacts found as archaeologists dug deeper only served to underscore the project’s central dilemma: how to build a luxury hotel on top of fragile ruins.

Award-winning Turkish architect Emre Arolat devised the winning solution, opting to loft the hotel’s entire edifice on steel columns floating above what is now the publicly owned and operated Necmi Asfuroğlu Archaeology Museum. The project included 66 columns and roughly 20,000 tons of hand-welded structural steel—quadruple the amount used in the Eiffel Tower, per CNN.

As the building morphed to accommodate its antique understory, construction costs ballooned to more than four times their original estimate, totaling some $120 million. In all, more than six million hours of labor went into the hotel and museum’s creation.

The architects strategically planted the building’s steel columns in areas of the site that would not disturb any relics, reports Architectural Digest. Arolat and his associates also utilized modular construction to minimize potential construction impacts, slotting in prefabricated guest rooms much like Legos. Even larger public spaces such as the lobby, bar and restaurant were constructed off-site and inserted in this manner.

The Asfuroğlu family’s final product affords guests an aerial perspective of the fully excavated, 2,300-year-old ruins, as well as a view of the nearby Saint Pierre, a church impressively built inside a cave that represents one of Christianity’s oldest places of worship.

Though the hotel, with its unique combination of history and luxury, opened at an admittedly “difficult and unprecedented time,” a spokesperson for the museum tells CNN it has “been keeping all our guests informed and … taking the necessary steps, and implementing measures in preparation for the future.”

The spokesperson adds that staff will monitor the situation with COVID-19 closely, and “as things hopefully begin to normalize we anticipate a very busy last quarter of 2020.”