Early Monday morning, NASA's Mars Helicopter Ingenuity became the first aircraft to attempt and successfully complete the first powered, controlled flight on another planet. The flight took place at 3:34 a.m. EDT where Ingenuity whirled ten feet into Mars's thin atmosphere, hovered for 39.1 seconds, and then safely touched back down onto the planet's dusty surface, reports Steve Gorman for Reuters.

The historic flight is an impressive proof-of-concept test that confirms helicopters could be beneficial in future interplanetary missions, reports Max G. Levy for Wired. The flying spacecraft could provide aerial views to guide future rovers and astronauts in areas that are difficult to maneuver, reports Marcia Dunn for the Associated Press.

The Martian flight is significantly more complex than on Earth because of the differences in the two planets' atmospheres. The Martian atmosphere is only one percent as dense as Earth's atmosphere, so Ingenuity had to spin its rotor blades at 2,500 revolutions per minute to achieve aerodynamic lift—that's five times faster than needed on Earth, Reuters reports.

Ingenuity's flight was fully autonomous, guided only by on-board navigation and control systems, each running an algorithm developed previously by JPL, NASA explains in a statement. Because of the distance, communications from the helicopter and Perseverance to Earth occur through orbiting satellites and NASA's Deep Space Network, so the four-pound chopper's flight could not be observed in real-time.

Ingenuity's team had to wait more than three hours before they could confirm if the pre-programmed flight, more than 170 million miles away, was successful, reports the AP. Once they confirmed Ingenuity rose into the Red Planet's skies, mission control burst with cheers, applause, and laughter. 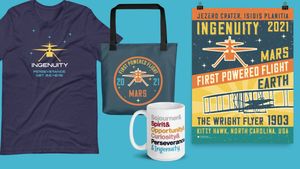 "We can now say that human beings have flown a rotorcraft on another planet," says MiMi Aung, Ingenuity project manager at JPL, to Ashley Strickland for CNN. "We've been talking about our Wright Brothers moment on another planet for so long. And now, here it is."

Before its successful flight, Ingenuity had a series of obstacles to overcome. First, the tiny robotic flyer had to survive subzero temperatures on its first night alone without Perseverance. Then, its initially scheduled flight on April 11 was delayed after a software glitch in the helicopter's command sequence was detected during preflight checks, reports CNN. Once NASA tweaked the command sequence, they received data on April 16 that Ingenuity completed the rapid spin test of its rotors and was ready for flight, CNN reports.

Soon after Ingenuity's lift-off and landing, the drone sent a black and white photo of its shadow during the flight back to engineers on Earth through communication with the Perseverance rover. Perseverance also sent high-resolution snaps of the helicopter's flight and landing from 200 feet away, reports Reuters. To navigate the 33-by-33-foot airfield during the flight, the chopper used its camera to capture snapshots 30 times per second, CNN reports. That small plot of Martian airspace was ceremoniously dubbed Wright Brothers Field by NASA's associate administrator for science Thomas Zurbuchen, NASA reports in a statement. As another tribute, Ingenuity also has a swatch of fabric from the Wright Brother's plane, Flyer I, affixed underneath its solar panels.

NASA plans on testing Ingenuity's flight skills five more times, with the next flight scheduled no earlier than April 22, reports CNN. Each flight will push Ingenuity's limits to increasingly fly higher with less time in between.

"Once we get to the fourth and fifth flights, we'll have fun," Aung said to CNN. "We really want to push the limits. It's not every day that you get to test a rotorcraft on Mars. So we want to be very adventurous."

Elizabeth Gamillo is a daily correspondent for Smithsonian and a science journalist based in Milwaukee, Wisconsin. She has written for Science magazine as their 2018 AAAS Diverse Voices in Science Journalism Intern.