In 2016, historian Tiya Miles was visiting the Smithsonian’s newly opened National Museum of African American History and Culture (NMAAHC) when she encountered an astonishing item: a simple cotton sack, stained and yellowed over time. The item’s lower third bears a message beautifully stitched in red, brown and green thread:

mother of Ashley gave her this sack when

she was sold at age 9 in South Carolina

it held a tattered dress 3 handfulls of

pecans a braid of Roses hair. Told her

It be filled with my Love always

She never saw her again

Ashley is my grandmother

Told in just ten lines, Ruth’s embroidered story offers a brief, powerful glimpse into the brutality of child separation under chattel slavery. Her story also prompts strong emotion: When the pouch, now known simply as “Ashley’s sack,” went on view at Middleton Place, a plantation-turned-museum in South Carolina, in 2011, so many onlookers were brought to tears that curators placed a box of tissues nearby, according to a statement.

Inspired by Ruth’s words, Miles, a historian at Harvard University’s Radcliffe Institute for Advanced Study, tells Slate’s Rebecca Onion that she embarked on a “deeply exploratory and experimental project” to learn as much as she could about the satchel and its owners. Her research has now culminated in a newly published book—All That She Carried: The Journey of Ashley’s Sack, a Black Family Keepsake—that places the artifact at the center of an epic American narrative.

After Ruth adorned the fabric with her message in 1921, its journey remains mostly shrouded in mystery, writes critic Jennifer Szalai for the New York Times. As Miles explains to WBUR, a white woman accidentally discovered the 33- by 16-inch bag in a bin of rags at a Tennessee open-air flea market in 2007.

Assuming that Ruth may have had ties to Middleton Place, the woman eventually donated the item to the historic landmark. (The former plantation was once occupied by the prosperous Middleton family, who enslaved hundreds of people in the 19th century.) In 2016, Middleton Place loaned the satchel to NMAAHC, where it remained on view until earlier this year. Per the statement, the artifact will eventually go on display at the International African American Museum in Charleston, which is slated to open in early 2022. 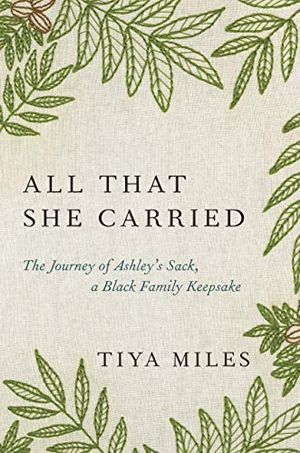 All That She Carried: The Journey of Ashley's Sack, a Black Family Keepsake

A renowned historian traces the life of a single object handed down through three generations of Black women to craft an extraordinary testament to people who are left out of the archives.

Despite the connection suggested by Ruth’s last name, extensive research conducted by Miles and cultural anthropologist Mark Auslander of Central Washington University suggests that Rose and Ashley were actually enslaved by one Robert Martin, also of South Carolina. Both women’s names appear in records of enslaved people written shortly after Martin’s death in 1852.

During that period of instability, as family finances were reshuffled and liquidated, it’s possible that Martin’s relatives sold 9-year-old Ashley away from her mother. Still, Miles notes in the book, the odds that the names listed on these records correspond to Ruth’s ancestors are “surer but not absolute.”

Faced with a dearth of sources, Miles weaves Ashley’s sack into a larger discussion about the lives of enslaved Black women and their descendants. Knowing what challenges her daughter would likely undergo, Rose packed Ashley an “emergency kit for the future”—the dress, pecans and lock of hair referenced in the embroidered message, as Miles explains in an excerpt published by the Atlantic earlier this month.

“These items show us what women in bondage deemed essential, what they were capable of getting their hands on, and what they were determined to salvage,” the historian adds.

When Ruth embroidered her foremothers’ history into this cloth sack in 1921, she also enshrined her family’s legacy. Throughout the book, Miles examines how scholars can creatively contend with gaps in the historical record—especially when most sources about enslaved people in American history originate from the enslavers themselves, per the Times.