A new show at the Met features 100 of the American artist’s paintings, drawings and watercolors 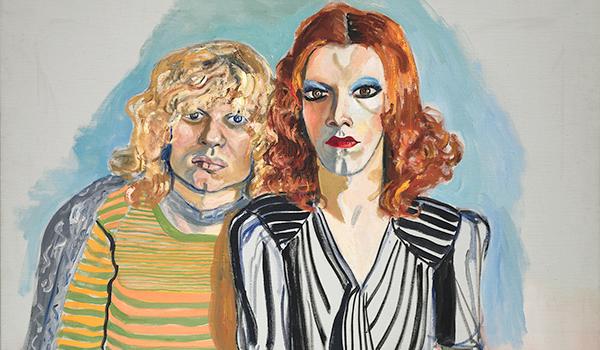 In 1970, artist Alice Neel created a stunning portrait of Andy Warhol. The painting—created two years after radical feminist Valerie Solanas attempted to assassinate the Pop Art icon—depicts its blue-tinged, shirtless subject in an uncharacteristically vulnerable position: Sitting with his eyes closed and his hands clasped in front of him, Warhol’s scarred chest is on full display.

“This picture of Andy Warhol is important because this image isn’t the Andy Warhol that we know in 2021, nor do I think that it’s the image that most people would have known in 1970,” says Kelly Baum, a curator at the Metropolitan Museum of Art, in a virtual tour of the Manhattan institution’s latest exhibition, “Alice Neel: People Come First.”

Baum adds, “Andy Warhol was known for very carefully managing his self-image, and that self-image was always based on control … but here, Warhol seems to submit entirely to Neel and he relinquishes that sense of stagecraft for which he is so famous.”

Warhol’s 1970 portrait is one of approximately 100 paintings, drawings and watercolors included in the Met’s newly opened retrospective, reports Chloë Ashby for the Art Newspaper. Per a statement, many of the works featured in the exhibition portray Neel’s subjects—who ranged from fellow artists to immigrants to political activists—in a raw, intimate light.

“There’s a real connection between the sitters and also between them and the artist, who feels closer, both psychologically and physically, than she often is,” Sarah Roberts, a curator at the San Francisco Museum of Modern Art (SFMOMA) who was not involved in the Met exhibition, tells the Art Newspaper.

One such portrait, Pregnant Woman (1971), shows Neel’s daughter-in-law Nancy during the late stages of pregnancy. As art historian Cindy Nemser once observed, per the Met’s website, the unidealized nude “[defies] the comforting mystique of childbearing” and “[dwells] on the very unnaturalness [of] incipient motherhood.”

Pregnant Woman heightens this “unnaturalness” by focusing on Nancy: Though she is portrayed delicately, the rest of the canvas is largely left blank, with Neel using quick, abstract marks, rather than tight, detailed brushwork, to render her subject’s surroundings, writes Susan Delson for the Wall Street Journal.

Other works in the show, like Self-Portrait (1980), are more introspective. This image—painted four years before the artist’s death at age 84—shows a nude Neel sitting on a blue-striped chair while holding a brush in her right hand. As the Met’s catalog listing points out, the self-portrait is “aimed squarely at an ageist, sexist society unused to seeing bodies like hers represented in fine art and popular culture.”

Born in Pennsylvania in 1900, Neel was the fourth of five children. She trained at the Philadelphia School of Design for Women before moving to Greenwich Village.

Throughout her career, the artist fought against social discrimination, strove to represent women realistically, advocated for gay rights and spoke out against racial oppression.

“She painted people of color, the poor, the elderly, children, immigrants, gay and transgender people, workers, artists and political activists,” writes Smee. “She painted them naked and clothed, ailing and healthy, in Greenwich Village in the 1930s and later in Spanish Harlem and, from 1962 on, in West Harlem. She paid attention to them in ways that felt—and still feel—connected to love.”

Though Neel painted for most of her life, she only began to gain widespread acclaim in the 1970s, when she created a cover of writer Kate Millett for Time magazine and headlined a retrospective at the Whitney Museum of American Art.

“Neel’s portraits are deeply human: [H]er empathy for the people in her community resulted in paintings of such unflinching intensity it is as if past and present—their time and ours—are brought together in a single moment,” says curator Sheena Wagstaff in the statement. “Now, when personal histories are crucial to establishing self-identity, Neel’s world tells the stories of human beings from all walks of life in the city she called home.”

“Alice Neel: People Come First” is on view at the Metropolitan Museum of Art in New York City through August 1.