How Artists Are Responding to the Killing of George Floyd 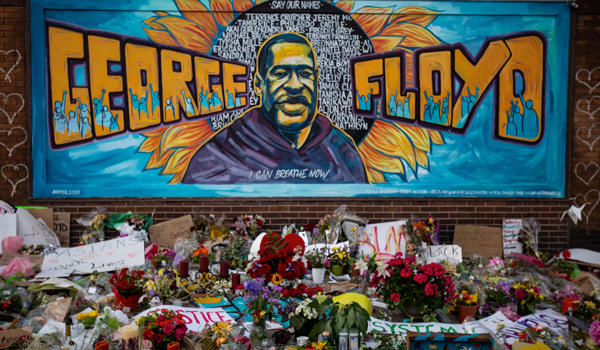 A makeshift memorial and mural outside Cup Foods, where George Floyd was killed by a Minneapolis police officer on Sunday, May 31 Jason Armond / Los Angeles Times via Getty Images

Throughout modern history, art and protest have often gone hand in hand. From the incarceration of Japanese Americans during World War II to the Vietnam War, the civil rights movement and the AIDS crisis, examples of American artists’ creative responses to tragedy and injustice abound.

In recent days, large-scale protests sparked by the killing of George Floyd have erupted in every state in America, as well as around the world. Per the New York Times, Minneapolis police officer Derek Chauvin knelt on the 46-year-old black man’s neck for eight minutes and 46 seconds, even as Floyd repeatedly stated that he couldn’t breathe. Now, those outraged by yet another senseless tragedy are rising up in protest of systemic racial injustice and the continued use of deadly force against black people.

As protests and rallies continue, artists in the U.S. and around the world are creating works that memorialize Floyd’s death and respond to the present moment. From viral social media illustrations to street art and planes flying banners over protesters’ heads, these are some of their creations.

George Floyd’s life mattered. His killer, Derek Chauvin has just been arrested as he should’ve been days ago. Chauvin’s arrest is not justice, and his conviction will only be a fraction of justice. Black lives in this country are being destroyed by a virus of racism, fear, and hatred. It is up to everyone to take a stand and actively work to tear down this centuries-old pandemic. NOW. Art for @blklivesmatter #BlackLivesMatter #JusticeForGeorgeFloyd #JusticeForGeorge #Justice #JusticeForFloyd #GeorgeFloyd

Michelle Obama was one of many Instagram users who reposted Los Angeles-based artist Nikkolas Smith’s portrait of Floyd. Smith chose to depict Floyd in a suit and bowtie rendered in thick, Impressionist-style brushstrokes.

“I don’t like clean lines,” the artist tells Time magazine. “That’s a parallel to all these lives. They did not have a chance to see their end. They should still be living.”

Houston street artist Donkeeboy and his mother, who goes by Donkeemom, painted this mural in the city’s Third Ward. The mural, which features the text “Forever breathing in our hearts,” depicts Floyd as an angel framed by a bright blue background. It’s painted on the side of Scott Street Food Mart, in the neighborhood where Floyd grew up.

“I really wanted to do this so I could highlight the life of George Floyd,” Donkeeboy tells local broadcast station KHOU 11.

“The wall is located across the street from where George Floyd grew up,” the artist wrote in an Instagram post. “I must admit, this was the first time painting where I felt sad and honored at the same time.”

Shirien Damra, a freelance graphic designer based in Chicago, created portraits of Breonna Taylor, Ahmaud Arbery and Floyd surrounded by wreaths of colorful flowers. She then posted them on Instagram, where they garnered millions of likes and thousands of reposts.

“I wanted these pieces to be a gesture of solidarity with black communities in their time of grieving,” Damra tells CNN. “I noticed a lot of people sharing the videos of Ahmaud and George’s deaths, so I wanted to create an alternative. These videos are very traumatic and triggering.”

This week, Dallas-based artist Jammie Holmes created an “aerial demonstration” to protest Floyd’s killing, reports Gabriella Angeleti for the Art Newspaper. As part of the project, planes bearing banners with the words Floyd spoke as he pleaded with police officers to stop suffocating him—“PLEASE I CAN’T BREATHE,” “MY STOMACH HURTS,” “MY NECK HURTS,” “EVERYTHING HURTS” and “THEY’RE GOING TO KILL ME”—flew over protests in cities including Detroit, Dallas, Los Angeles and New York City.

“The deployment of Floyd’s last words in parts of its whole across the country underlines a need for unity and the conviction that what happened to Floyd is happening all over America,” says Holmes in an artist statement. “With this demonstration, I hope that people across the United States will use the outlets available to them to continue to demand change.”

New York-based visual artist Kambui Olujimi posted a series of ink on paper works on Instagram. This one, titled The 3rd Precinct Burns in Minneapolis, was inspired by videos of the Minneapolis Police Department’s Third Precinct station being set on fire during protests.

“There’s a popular notion that riots are just spontaneous outbursts of emotion, a visceral response to a single incident, but they are not,” Olujimi tells the Guardian’s Nadja Sayej. “These actions are the result of persistent and untenable conditions that are willfully ignored, what I call the ‘silent-state riot.’ I wanted to make something that will not allow us to forget this moment, and the countless lives that have led to this.”

Minneapolis illustrator Andres Guzman posted this portrait of Floyd on his Instagram page, where it quickly went viral. He specified in his post that he hoped people reused the image for protest in whatever way they saw fit.

“I really just wanted to make graphic resources available to people to make posters, shirts,” Guzman tells Makeda Easter of the Los Angeles Times. “From past experience, graphics are always needed in the aftermath of unjust systemic attacks on the public.”

A group of Minnesota artists painted this 20-by-6.5-foot mural outside the grocery store Cup Foods. On May 25, a Cup Foods clerk called the police and accused Floyd of buying cigarettes with a counterfeit $20 bill. Artists Xena Goldman, Cadex Herrera, Greta McLain, Niko Alexander and Pablo Hernandez painted this mural in 12 hours, reports Hakim Bishara for Hyperallergic. In the last week, protesters and those wishing to pay their respects have placed flowers and other votives next to the mural, which also includes the names of other black Americans killed by the police.

“It’s comforting and incredibly hopeful to us that the mural is being appreciated by the community,” Herrera tells Hyperallergic. “Our idea was to depict Floyd not as a martyr but as a social justice hero.”

Italian street artist Tvboy created this graffiti mural on the Centre of Culture and Memory in Barcelona, Spain. “STOP RACISM!” the artist posted on his Instagram.

Street artist Emmalene Blake paid tribute to Floyd with this mural on her estate in Dublin, Ireland.

“It’s all of society’s responsibility to stand against inequality and injustice,” she says to RTÉ News.

Graffiti artist EME Freethinker created this mural in Mauerpark, a state park in Berlin, Germany. The portrait bears the phrase “I can’t breathe”—one of the last things Floyd told Minnesota police officers before he died. The Afro-Carribbean artist posted photos of his creation on Instagram and Facebook alongside the caption, “No words…”

Syrian artists Aziz Asmar and Anis Hamdoun painted this tribute to Floyd on the ruins of buildings in the Binnish district of the Idlib province, which is among the regions most affected by Syria’s ongoing civil war. The artists painted the mural to “call for peace and love,” according to an Arab News report. Asmar tells local news outlets that Floyd’s death reminded him of the Syrian civilians who were “killed by suffocation after the Syrian regime hit them with chemical weapons,” according to Arab News.

Street artists Mr. Detail Seven and Bankslave collaborated on this mural in Kibera, a neighborhood in Nairobi, Kenya.