In the 1980s, while conducting research at a courthouse in Louisiana, Gwendolyn Midlo Hall discovered a book written by 18th-century notaries that meticulously recorded details about hundreds of enslaved individuals: their names, where they came from, their skills, even their inclination toward rebelliousness.

As Hall told the New York Times’ David Firestone in 2000, she was “astounded”; English colonists rarely documented such information about the individuals who were brought from Africa to toil as enslaved laborers in America. Most scholars had assumed that details about their identities were simply lost to the passage of time.

Hall, a scholar of Caribbean and African-Latin history, subsequently began a years-long investigation of neglected archives in Louisiana, France and Spain, where she found similarly revelatory records about enslaved individuals in colonial-era Louisiana. With the help of five assistants, she compiled that information into the “Louisiana Slave Database and Louisiana Free Database 1719-1820,” a revolutionary digital compendium that included searchable information about some 107,000 individuals.

Hall died on August 29, at the age of 93, reports the New York Times’ Clay Risen. She leaves behind an indelible legacy on both scholarly understanding and public perception of America’s colonial past. As Steven Mintz, a historian at the University of Texas, said on her 90th birthday in 2019, Hall was “someone who has utterly transformed our understanding and restored the voices, lives and agency of those who made our world.”

Born in 1929, in New Orleans, Hall was immersed in a world of activism from an early age. Her father, a Jewish civil rights and labor lawyer, was among the few local members of his profession who were willing to defend Black clients. Segregation and other discriminatory policies “always bothered” Hall, her friend Ned Sublette tells the Times-Picayune/New Orleans Advocate’s John Pope. She joined several civil rights causes as a teenager, including the New Orleans Youth Council, an interracial group that protested segregation and helped register Black voters. In 1949, she was arrested for “violating a city segregation ordinance,” according to the New York Times.

Hall spent time in Paris, where she met and married her first husband, Michael Yuspeh. The union was short-lived, and Hall later married the American civil rights activist Haywood Hall. He was Black; he was also a communist. Upon the couple’s return to the United States in the 1950s, they became the target of racial hostilities. The Halls moved to Mexico City, where Gwendolyn enrolled at Mexico City College. She studied Latin American history, earning both a bachelor’s and master’s degree.

In 1970, Hall received her PhD from the University of Michigan. After that, she spent 25 years teaching Latin American and Caribbean history at Rutgers University in New Jersey.

Hall’s research into the identities of enslaved individuals was groundbreaking not only for its subject matter, but also for the way she made it available to the public.

“Nobody was doing databases then,” Hall told Ned Sublette of the radio show “Afropop Worldwide” in 2005. The database, published in 2000 was available first in CD format, then online, allowing descendants of enslaved individuals to trace previously inaccessible histories. 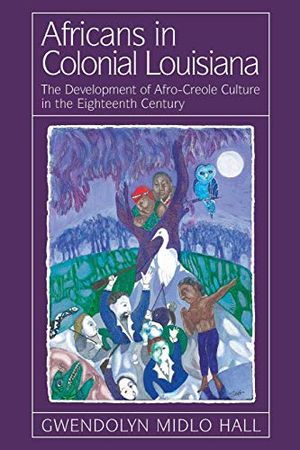 Africans In Colonial Louisiana: The Development of Afro-Creole Culture in the Eighteenth-Century

In this pathbreaking work, Gwendolyn Midlo Hall studies Louisiana's creole slave community during the eighteenth century, focusing on the slaves' African origins, the evolution of their own language and culture, and the role they played in the formation of the broader society, economy, and culture of the region.

The information that Hall assembled was also the basis of her award-winning 1992 book, Africans in Colonial Louisiana: The Development of Afro-Creole Culture in the Eighteenth Century. According to the New York Times, the book “went against the conventional wisdom that colonial Louisiana was largely shaped by Haiti and other parts of the French-speaking Caribbean,” showing that a majority of enslaved Africans in Louisiana came from Senegal and Gambia. Hall’s portrait of a unique Afro-Creole culture—born of enslaved individuals’ interactions with Native Americans and French and German colonists—became required reading not only for scholars, but also for musicians and artists in New Orleans. Wynton Marsalis’ jazz oratorio ​​“Blood on the Fields,” the first jazz work to win a Pulitzer Prize for music, was inspired by Hall’s book.

In 2011, Hall’s database was incorporated into Slave Biographies: The Atlantic Database Network, which also included historian Walter Hawthorne’s dataset on enslaved individuals in the Brazilian state of Maranhão. Slave Biographies in turn “laid the groundwork for Enslaved.org, a site capable of not only housing dozens of datasets but also placing them in interaction with each other,” wrote Smithsonian magazine’s Meilan Solly in 2020.

“For so long there was this tendency, even in the most prestigious academic circles, to see Africans as an abstraction, coming from a simple single place,” Hall told the New York Times’ Firestone. She expressed the hope that her database would “help smooth the path for others to make Africans concrete as human beings”—a wish that she would live to see fulfilled.