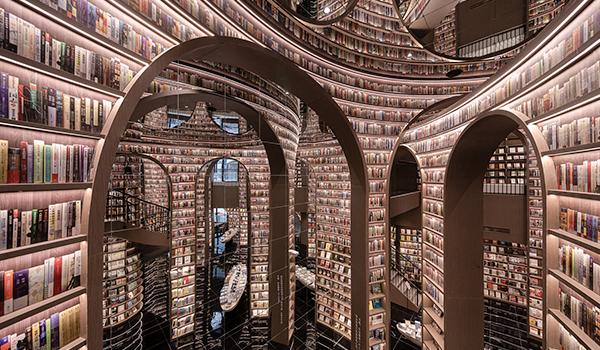 A view of the Dujiangyan Zhongshu bookstore Feng Shao / X+Living

A recently opened bookstore in southwest China looks like it came straight out of one of Dutch artist M.C. Escher’s fever dreams.

Located west of Chengdu in the Sichuan province, Dujiangyan Zhongshuge boasts spiraling staircases, curved archways and strategically placed mirrors; these architectural features work in tandem to create the illusion of an impossible space similar to the one depicted in Escher’s gravity-defying Relativity (1953).

“We moved the local landscape into the indoor space,” Li tells Architectural Digest’s Elizabeth Stamp. “The project is located in Dujiangyan, which is a city with a long history of water conservancy development, so in the main area, you [can] see the construction of the dam integrated into the bookshelves.”

According to a statement, the Dujiangyan store—much like Zhongshuge’s other locations—uses a mirrored ceiling to simulate a sense of limitless openness. Book-laden, ceiling-high shelves echo the curves of nature, while glossy, black-tile flooring makes reading tables scattered across the space resemble boats moored on a lake.

Visitors walking through the labyrinth-like store will find areas designed to fulfill different purposes. The children’s reading room, for instance, is replete with panda posters, bamboo bookshelves and colorful cushions.

As Li notes on Instagram, the tomes placed on the bookshelves’ highest levels are purely decorative. But all books within readers’ reach—some 80,000 volumes spanning more than 20,000 categories—are “readable,” she adds.

This isn’t X+Living’s first foray into the book world: The firm has previously created Zhongshuge branches in Guangzhou, Yangzhou, Minhang and Chongqing, among other locations across China.

At the Yangzhou store, designers relied on mirrored floors and arched shelves to “create the illusion of an infinite tunnel of books,” per Atlas Obscura’s Kerry Wolfe. And in Chongqing, wrote Nick Mafi for Architectural Digest in June 2019, architectural features lent the space “an almost delirious, vertiginous” vibe.

Perhaps even more so than the new location in Dujiangyan, the Chongqing store deftly channels Escher’s surreal creations, featuring a “ladder hall” in which “mountain-shaped stairs” double as bookshelves, according to a statement.

“The clients asked me and my team to create a bookstore that was also a landmark," Li told Architectural Digest’s Mafi in 2019. “The glass ceiling enlarges the space, while creating something that appears more magical than it does real.”