Why Photographer Cindy Sherman Is Still the Queen of Reinvention 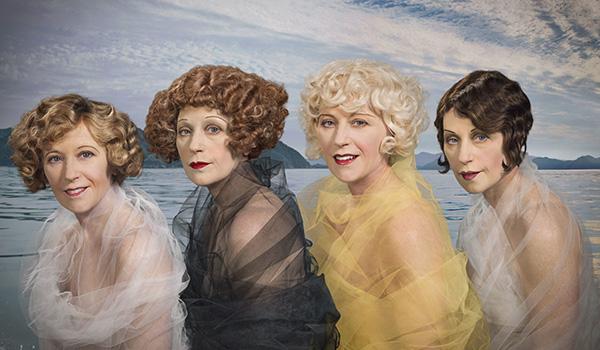 Long before selfies started dominating Instagram feeds, photographer Cindy Sherman was taking pictures of herself dressed as damsels in distress, classic Hollywood actresses, historical figures, and even clowns and corpses.

These stunning transformations—made possible by Sherman acting simultaneously as model, photographer, stylist, hairdresser and makeup artist—are the subject of a new retrospective at the Fondation Louis Vuitton in Paris. As Jonathon Keats writes for Forbes, the show spotlights an artist whose subject is often “herself as somebody else,” caught in a moment of masquerade that highlights the illusory nature of not only photography, but identity itself.

Over the past 45 years, Sherman has taken hundreds of self-portraits in settings both real and imagined, from tiled Mediterranean courtyards to the empty streets of downtown Manhattan. Donning press-on nails, bleached wigs, intricate makeup and similarly appearance-altering aids, the photographer assumes personas with chameleon-like ease; though her methods have changed over the decades, Sherman’s underlying goal—presenting a novel critique of female representation in photography—has remained unchanged since she began her career in the 1970s.

“All the dictates of society—that a young woman should look like this—she refuses,” the exhibition’s head curator, Suzanne Pagé, tells Vogue’s Dana Thomas. “And her refusal of these criteria is evident in her images.”

Per a statement, “Cindy Sherman at the Fondation Louis Vuitton” features more than 170 works created between 1975 and 2020. Images from some of the photographer’s most famous series, including Untitled Film Stills (1977–80), Society Portraits (2008) and History Portraits (1998–90), appear alongside more recent, previously unseen works.

Though Sherman initially studied painting at Buffalo State College, she eventually turned to photography as a medium. By creating clever costumes and transforming herself into different characters, the photographer comments on complex subjects ranging from Western beauty standards to commonly accepted ideas about femininity.

Few works exemplify Sherman’s genre-defying oeuvre as well as the Untitled Film Stills. According to the Museum of Modern Art (MoMA), which currently houses the collection, the series finds the artist dressed up as imaginary “female characters (and caricatures) such as the jaded seductress, the unhappy housewife, the jilted lover, and the vulnerable naif.” Seemingly presented as snapshots from larger narratives, the Film Stills’ subjects are, in fact, simply costumed, cosmeticized tropes awaiting the viewer’s projections of meaning.

In a 1988 interview, Sherman said the series aimed to encourage audiences to question stereotypical portrayals of women.

“[It was] about the fakeness of role-playing as well as contempt for the domineering ‘male’ audience who would mistakenly read the images as sexy,” she explained.

Now 66 years old, Sherman is turning her attention to other subjects, like aging.

“Using myself in the work now underscores certain elements of aging which I otherwise could be less aware of,” she tells artnet News’ Osman Can Yerebakan.

And while Sherman’s previous works have focused on women, her artistic process continues to evolve. Most recently, she decided to tackle a new subject: men.

This latest series—featured in a separate show at Metro Pictures in New York City—shows male characters outfitted in slick combovers, camel coats and more rebellious looks. In Untitled #615, for instance, a crouching figure dressed in camouflage stares at the viewer defiantly, his hand resting lightly on his hip.

In the past, Sherman’s “preconceived idea [of] how men act” colored her attempts to pose as men. “They appeared generic and unsympathetic,” she tells artnet News.

A related exhibition titled “Crossing Views” is running concurrently with “Cindy Sherman at the Fondation Louis Vuitton.” The companion show features works chosen in collaboration with Sherman and features artists such as Marina Abramović, Damien Hirst and Wolfgang Tillmans.

“I’ve missed seeing art very much during the pandemic,” Sherman tells W magazine’s Kat Herriman. “I find looking at art, even bad art, to be very informative and inspiring—it helps me to formulate why things work and don’t work.”