China's smog problems have been all over the news, with the air pollution to blame for bringing massive cities to a snarl, forcing the shutdown of factories and transportation, and wreaking havoc on people's health. But a new photo captured by NASA's Terra satellite really puts China's smog problems into perspective: the smog over Beijing is so thick that it obscures the view of the city from space.

On December 7th, says NASA's Earth Observatory, the day this photo was captured, “ground-based sensors at U.S. embassies in Beijing and Shanghai reported PM2.5 measurements as high as 480 and 355 micrograms per cubic meter of air respectively. The World Health Organization considers PM2.5 levels to be safe when they are below 25."

PM2.5 refers to particles of air pollution that have a diameter below 2.5 micrometers.

“Fine, airborne particulate matter (PM) smaller than 2.5 microns (about one thirtieth the width of a human hair) is considered dangerous because it is small enough to enter the passages of the human lungs. Most PM2.5 aerosol particles come from the burning of fossil fuels and of biomass (wood fires and agricultural burning).”

For reference, here's what the region is supposed to look like from space, a snap captured by Terra in January of last year. Beijing is the city in the top left, nestled among the mountains. The port city in the bottom right is Tianjin. 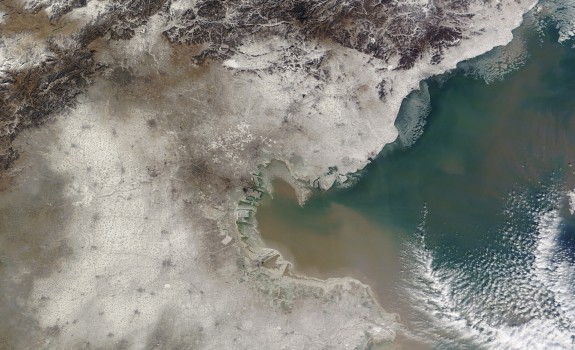