Though known and celebrated for his songwriting, Bob Dylan has also ventured into prose during his decades-long career. In addition to collections of his lyrics, the prolific, Minnesota-born singer-songwriter has published Tarantula, a 1971 prose and poetry collection, and Chronicles: Volume One, a 2004 experimental memoir.

Now, Dylan is adding another title to his roster: The Philosophy of Modern Song, which was released on Tuesday.

The book is a collection of 66 essays, each one inspired by a different song. None of them are Dylan songs—rather, they are a wide-ranging collection of songs that Dylan admires, from the Clash’s “London Calling” to Nina Simone’s rendition of “Don't Let Me Be Misunderstood.”

The essays generally consist of two parts: a riff section, in which Dylan uses the song at hand as a jumping off point for a sprawling array of musings and reflections, and an exposition section, which provides background on the artist and the record itself.

“The Philosophy of Modern Song could only have been written by Bob Dylan,” says Jonathan Karp, president of Simon & Schuster, in a statement. “His voice is unique, and his work conveys his deep appreciation and understanding of songs, the people who bring those songs to life, and what songs mean to all of us.” 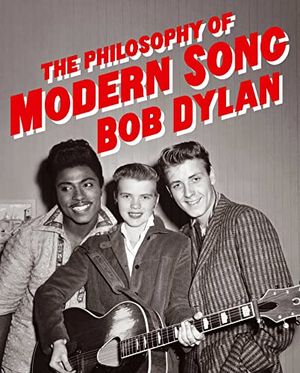 The Philosophy of Modern Song

The Philosophy of Modern Song is Bob Dylan’s first book of new writing since 2004’s Chronicles: Volume One—and since winning the Nobel Prize for Literature in 2016.

The collection certainly is unique. You’d be hard-pressed to find anyone else who claims that Marty Robbins’ romantic, Western ballad “El Paso” is “a song of genocide, where you’re led by your nose into a nuclear war, ground zero, New Mexico where the first atom bomb was tested” or another book that uses Johnnie Taylor’s “Cheaper to Keep Her” as an entryway into an impassioned defense of polygamous marriage.

The 66 songs Dylan selected span decades and genres, but they have at least one common thread: Sixty-two of them are by men. That’s partially why critics are saying The Philosophy of Modern Song has a “woman problem,” as New York Times critic Dwight Garner puts it.

“Dylan is a brilliant songwriter, of course; the truth is, he’s a better singer, a master vocal stylist whose performances speak to the deeps of human emotion even when they carry unseemly attitudes and ideas,” Rosen concludes. “But when his words just sit there, between hardcovers on a stark white page, their discordant notes are hard to bear.”

Slate critic Carl Wilson describes the same feeling: “Without music, his quicksilver collages of imagery, narrative, rhetoric and wisecrack are far more prone to come off as bullshit,” he writes. “As a listener, I don’t care that the real-life Dylan is probably kind of a dick. As a reader, it is harder to overlook.”

Still, Wilson lands on an endorsement of the bizarre book by one of the greatest American songwriters: “I’d still advise Dylan fans and the Bob-curious to jump on this bumpy ride,” he writes.